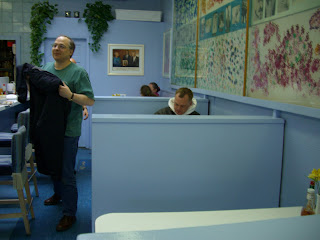 The Smile of the Beyond has been a very busy vegetarian restaurant recently, and when you are on the other side of the counter (foodwar), sometimes there is just not too much to......"smile" about.
In the late afternoons, quite often, like a small unexpected blessing, there can be a momentary lull, when the hordes have receded back, from the infinite and insatiable world of hunger from whence they came. 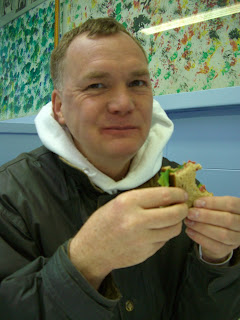 Premamrita, is in my opinion not exactly your typical human being. I believe him to be, in actuality, an other worldly pixie, that has somehow found himself shifted into the body of a ginger haired man from Sheffield England.
Make no mistake, he has all the usual habits and needs, of the rest of ravenous humanity. He likes blt's and of course a cup of tea. Maybe even many cups of tea, particularly in April when it is cool and damp.
He has been known to even bring to the US, his own special blend of tea, which he will leave behind the counter and then ask for it whenever he comes in, which could be multiple times in the course of a day. 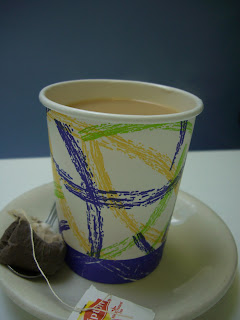 What separates him from much of humanity, and why I believe him to be from some other realm, is his exquisite sense of humor.
I love to laugh, but find most often, between hungry hordes, and mountains of food being relentlessly and swiftly dispatched from my salad bar, not a whole lot to laugh at.
People who claim to be funny, or are acclaimed by others to be so, will often in vain, try out their latest joke for me. I will try my darndest to be amused. More often than not, there is little likelihood, of the hilarious consequences of these efforts finding fertile ground in my expression. Not a smirk nor smile and nary even a sparkle beneath my nose and above my jaw line.
However, this man can really tell a joke


Click on the button to hear the joke
Posted by Utpal Marshall at 3:45 AM