Only to Please You 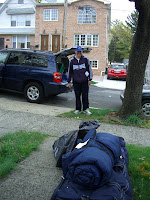 Chanakhya is loading up some of the clothing and supplies he will need for the upcoming 10 day race. It is Sunday and the race will not start for another 3 days but he is taking his stuff out now because he likes to be prepared. 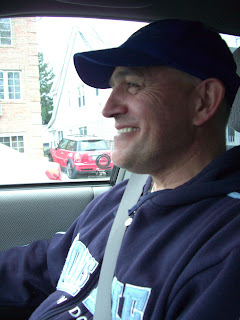 I ask him how many of these multi day races he has done over the years and he is not sure if it is 24 or 25. Clearly he is looking forward to the challenge, and is not anxious or nervous in any way that I can see. 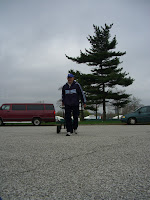 He tells me that his first long race, other than a marathon, was a 47 mile race dedicated to Sri Chinmoy's birthday almost 30 years ago in August of 1978. I mention that it sounds like a milestone. He pauses for a moment and smiles. "Amazing, I have been doing these things for 30 years."
I asked him what it was like to run that first really long distance 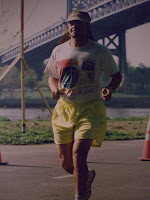 way back in 1978. He remembers, "I felt lucky, to be one of the 38 runners." For everyone at the time he says, it was something, "completely new and fresh, It was entering into the unknown." 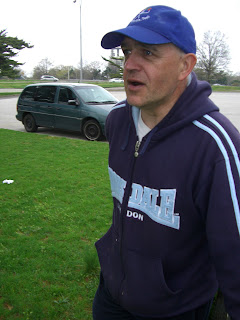 One thing is also certain about Chanakhya's running, is that he feels that it is a way to make not just physical progress but spiritual progress as well. In fact he feels that he dedicates every race to his teacher Sri Chinmoy.
Another important aspect he says of his running is that, "I have no expectation, I just participate and accept the result." 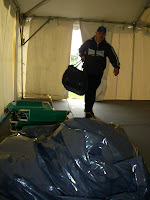 I ask him about the large amount of stuff we have transported out to the race. He will bring even more on race day. He confesses, "I always feel like I am not bringing enough stuff, then I don't use half of it.

For runners whose longest distance is no more than 10 km the idea of entering such long races is inconceivable. He tells me that after running 47 miles he really wanted to know what it would feel like to run for 24 hours. Then a distance event that was rarely put on. This then led on to even longer and more challenging events called multi days. 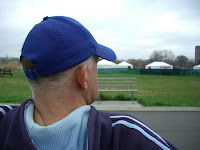 He tells me that his philosophy is in part, "I don't analyze too much. When I come here I don't worry about anything, I just run." More importantly, "I don't let the outside affect what's going on inside."
I ask him if he is ever concerned about trying to break records or run faster times. He tells me that for him, "transcendence is not about doing a better performance." He describes for me that he looks upon transcendence as being an inner challenge. That there are for him many inner challenges that can be conquered during a race like this. Ultim 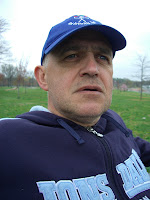 ately he feels his attitude should always be, "to have no expectation. Just participate and accept the result whatever it is." 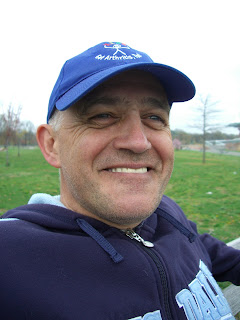 Over the many years of participating in these races Chanakhya has earned a reputation for being cheerful, at all times, at any hour of the day or night. He tells me, "I am happiest when I am doing these races." I mention that several people have told me that in this event runners enter another zone after 3 days. He says, "The first 72 hours is a battle between the heart and mind." For the lucky ones they can really start to get something from the event when they, "surrender the race to your heart."

Due to injury he was not able to compete in this event last year. Normally he would have entered the 6 day race. He tells me that when Sri Chinmoy came out to see the start of the 10 day race he asked the organizers, where his name was. Later when he saw Sri Chinmoy he made a promise, that he would run next year. In fact, since then, he has trained harder and participated in more races than he has in many years. 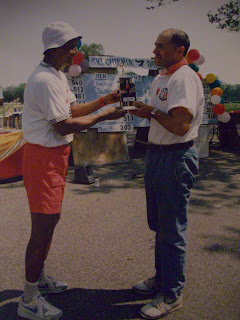 I ask him what else Sri Chinmoy might have told him about participating in such long races. He turns to me seriously for a moment and says, he told him personally, "It was his soul's goal to run in this type of race." He tells me that his spiritual name, Chanakhya means, human warrior and divine warrior. Extremely wise in human ways, and divine ways, earthly suffering and heavenly joy. Finally he takes his human ways, his human capacities, and human achievements and offers them to his own divinity. He tells me that the race is for him, clearly about gaining the experience of earthly suffering and heavenly joys. There is a pause and then he smiles, "This is not just about me, but also about everybody else."

I ask him if he wanted to condense his whole experience of running these long events and his relationship to his late spiritual teacher, Sri Chinmoy, what would it be. He smiled at me, in the way he so often does, that can easily brighten the front seat of a car, if not the whole 6 & 10 day race course, "Only to please you,"he says.
Posted by Utpal Marshall at 2:20 PM

Great blog. I just love these "interviews", they tell so much, so simply, and so right from the heart. Please keep going!
Vasanti