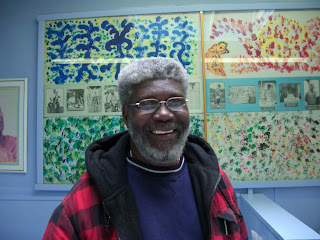 This is Little Joe. He doesn't come to the Smile enough. He is a guy who likes my steakburgers and I in turn like his stories. Usually one of my steakburgers is enough for him but I can never get enough of his stories.
He is a guy who moves fast, and when he comes into the store, he is always on the go and rarely sits down.
He told me once, how he met heavy weight champ, Muhammed Ali, shortly after he had won the title from Sonny Liston. They were both Muslims and must have met at one of the local Mosques. He told me that Muhammed Ali borrowed a friend of his motorcycle one day, and had it out so long, they didn't think he was ever coming back. I asked him if he had taken pictures, and he gave me an, 'aw shucks look.' As if to say, when this kind of thing happens, you just have to look quick. If it is really important, then you simply hold it for safe keeping in your heart. The only place that really counts.

Here he is telling me about James Brown and how in about 1969, he was driving a 56 Ford Fairlane and James Brown was in a brand new corvette. There was a hamburger joint near his home on Linden Boulevard. He shows up there and wants to show how fast the new corvette is to all the young guys hanging out there. He fires the thing up, burns rubber, and fires off down Linden boulevard, in the direction of his house, a few blocks away. He doesn't get very far, before he looses control, and crashes it into a tree in front of his own house.

I say to Little Joe, "there aren't any trees in front of James Brown's house. I have seen it." He tells me, "Not after he crashed his corvette into it."


Kaivalya is the father of two rather incredible sons. He has also spent his life being a school teacher in the UK. At heart though, he is a very gifted artist, who is so visually remarkable, that he can create, paint, build, and sculpt, just about anything. He is also a good actor, and if you push the button on the video, you can see he knows how to speak as well about statues.
Posted by Utpal Marshall at 7:12 PM