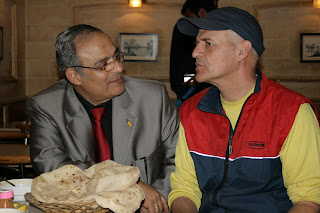 It seemed longer and easier, when I looked at the 5 large days on the calender. The dates spread out comfortably across the top of the March page, taking up almost the length of a full week. I would get to Cairo on the afternoon of the 2nd, accomplish everything in the allotted time, and be ready to go on to Tunis on the evening of the 7th. More than enough time to have ceremonies, travel, have adventures and make friends with lots of new people. 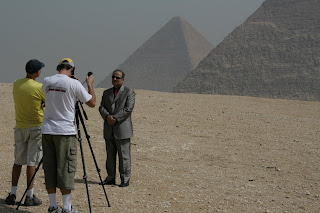 The truth is that nothing would have happened at all if I had not met with Hussein Fahmy of the Egyptian Athletic Federation. We met him one afternoon almost by chance, and he made some phone calls and bing, everything worked out. But something else happened, I think we saw in each other something unique. Our backgrounds could not have been more different. While I was a peacenik he moved up in the Egyptian military, eventually becoming a 2 star general. 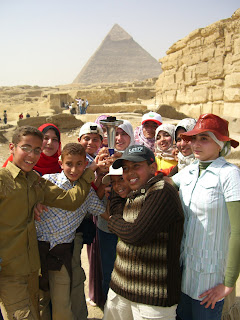 At a heart level though, we just seemed to click, and be in agreement about everything. Particularly, on what we would like to see happen in this world of ours. Simply put, that we all live in peace and harmony. Which is why I think, he embraced what we were doing so readily. Here I am interviewing him for a movie about the World Harmony Run. Later he and his friend from the federation would leave us for a short while to pray. It was during this time, that we just wandered around the pyramids at Ghiza with our torch, and let it be spread. These kids were playing a game when we came by. 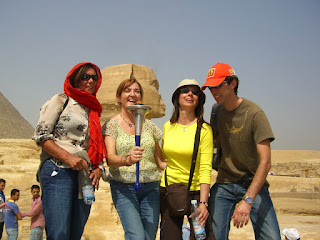 These people, well, I cannot remember where they were from, but they sure seemed to enjoy holding the torch. Dozens upon dozens of people participated spontaneously with us at this time. We spread a whole lot of joy to an amazing collection of representatives, from all parts of the world family, that day. 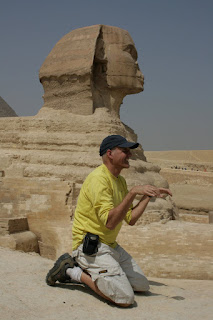 When I was here visiting, 20 years ago I recall having quite a few powerful experiences. This time our guide took us up to the tunnel, leading into the heart of the great pyramid. I realized, as I climbed, up and up in the tight inclined tunnel, that I had not done this before, on my previous visit. I am not sure why, though perhaps back then, it just seemed too claustrophobic to do it. This time though I willingly made my way up to the main chamber, in the heart of the pyramid. I was fortunate, for there was no one else there at the time. Just an abundant sense of peace. It was not a large space but as I quieted my mind, it began to feel as though it was immense, and that I had just walked into a great and vast open temple. When I descended the guide asked me what I felt. I just touched my hand to my heart and smiled.

Here I am just being a silly but very happy idiot. 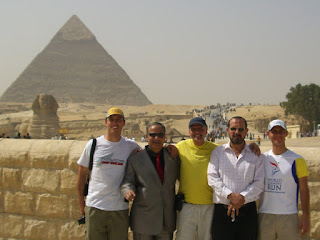 My friend Hussein Fahmy will eventually spend a full day with us. Picking us up at the train station at 6, taking us to breakfast and then for coffee and then to a wonderful place for lunch, within site of the pyramids. He will wait at the gate of the airport until we are all completely through. I will call him once from Madrid a week later and will realize how much I miss his company. He had told me, during our interview, that he wanted the pyramids to remain untouched for eternity. He also wanted peace to exist and spread, all around and about, our troubled little world. As I look at this picture, after many weeks, I wonder to myself, if you can have harmony, as strong and as quickly as this, between strangers, then why not the whole world.
Posted by Utpal Marshall at 5:43 PM