W'ere Not In Kansas Anymore 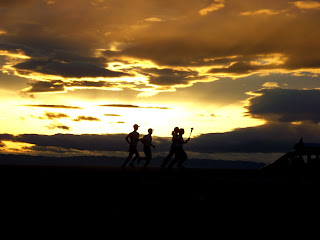 Over my many weeks on the road I will, from time to time, try to explain various classic movie lines, that for generations of film watchers, sums up in a nut shell, what is going on. For westerners, and this I mean native English speakers, watching the movie, "The Wizard of Oz," is almost a given. The thing is, that in Tunisia, of the 7 person World Harmony Run team, I am the only, first language, English speaker. I am dumbfounded to learn, that none has even heard of the film I am quoting from. 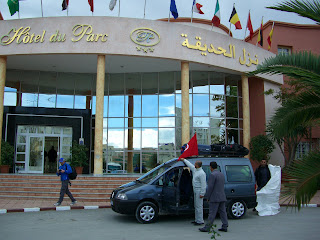 I am of course, trying to explain to my teammates how different Tunisia is, from Egypt, the country I left from, just the night before. I attempt to set up the scene, the little girl named Dorthy, a small dog named Toto, and then a fierce storm that blows her into a very different world.
Tunisia, much to my surprise would be worlds apart from Egypt, for many reasons. Now there was a real team, with many miles to cover, and a very strict schedule to follow. 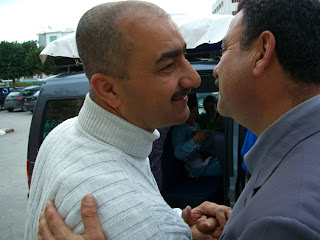 We would defy physics and common sense and travel for 6 days all across the country in this very little van with its fluttering Tunisian flag. Our 7 person team would come from 6 countries and in addition we have with us 2 Tunisians. We would have a driver named Achraf, and this indispensable man on the left, Moez. He would translate for us into French or Arabic or vice versa. In addition, he would know every sport figure or sport official in the country. And if he did not know everybody before we started he was well acquainted with them when we swung back into Tunis. 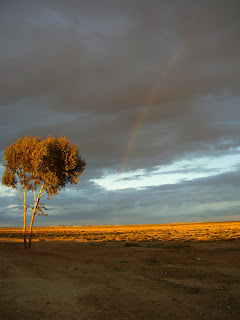 Our first day would start with delays, false starts, and generally spinning of wheels. We were supposed to drive to Gabes, and reach there before night fall. Eventually we figured out how to pack all the stuff on the roof. We put on a tarp, which was lucky, for a gentle shower splashed over the van as we headed out, very very late out onto the highway.
It was a real change for me to see clouds, little alone rain. In Egypt there was always clear dry skies. It was a change to see fields of flowers, great acres of olive groves, and when the air cleared a little, and the sun found a whole punched through the clouds, the warn evening light, filled up the entire landscape, like a dream. 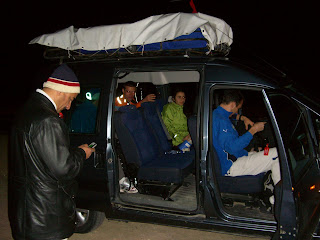 Night would come, and the damp evening air felt so, so much colder than a gentle Egyptian night. You had to pull on extra layers, and I felt a longing for the dry warmth of yesterday. 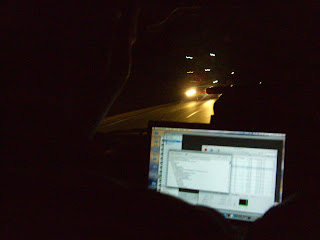 Computer keyboards flicked to life in the darkness of the van. There were tasks to be taken care of no matter that we were rolling through a damp cool Tunisian night.
There were many differences from Egypt besides a bigger team and brisk schedules. The predominant language spoken now was French and Arabic. 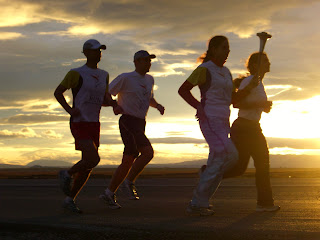 But here in Tunisia we would meet so many more people. See a very diverse landscape that shifted from a damp and fertile hilly coastline to the great arid expanse which is called the Sahara.
The torch here would find a new strength and purpose. The adventure here would continue on a much different path. What took place in Tunisia, over 8 days. could never be summed up, with even the best movie line.
Posted by Utpal Marshall at 4:21 PM