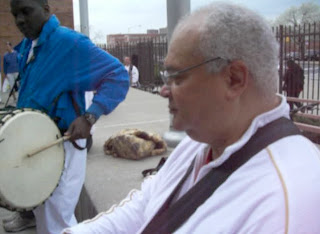 New York city school teacher, Pravin Mimms, has a lot of loves in his life. Growing up in the Bronx, he took a keen interest in all manner of sports, from track and field to Basketball. Of course sport wasn't everything.
He doesn't recall, how the idea first came to him. To put together, and perform, with his informal drum group. He believes that the first performance went on, more than 20 years ago. The exact date has been lost in the mists of time. Back then, he just wanted to contribute something unique to a small amateur circus put on by his meditation group, the Sri Chinmoy Center.
When asked when he himself first started playing drums, he recalls that it was some time back in the 60's, when he was attending college. Some young African dancers needed some accompaniment. 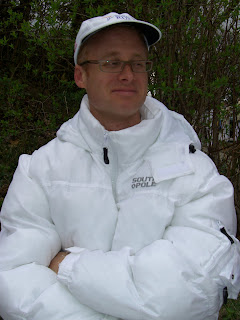 When he first got the idea to put on a drum act, he simply showed up the day of the Circus, with a big bunch of authentic African drums. Whoever was interested, had some sense of rhythm, could just pick up one of his instruments and play with him. Of course there would be some rehearsal and a rough program would be sketched out, but in the end it was spontaneous, joyful, and fun for listeners as well as players.

Natabara has been joining in for a few years now. He said, "some of the guys are really good. You join in at the level of your own capacity." 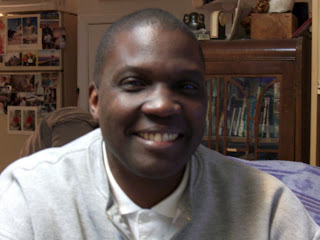 Khipra also has been playing for a long time. He feels that he can identify with the African consciousness that comes out when the drums are played. Most of the drums were in fact crafted in Africa. He says,"Its a fun way for a non musician to be connected to something musical." Sri Chinmoy enjoyed drumming he says and encouraged them to do it.
In fact as a child, Sri Chinmoy was so enchanted by drums that he had the nickname of Madal, which is Bengali for drum. The circus, which continues to take place, is called Madal circus.

click on the button to hear Pravin's drum performance
Posted by Utpal Marshall at 7:05 AM

I love your combination of blogging and video - it really works well!! Lets have more!!!