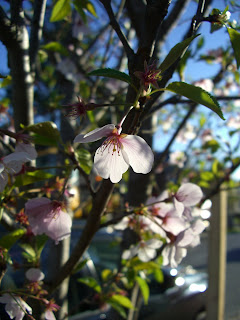 There may not be a prettier time of year to be in New York city, than in the spring time. Right now in Queens, every home, that has even the most microscopic patch of green in the front yard will usually have at least a flower or two.
Daffodils, hyacinths, tulips, and if nothing else a hardy flowering weed. One doesn't have to look very far to see some of nature's beauty pushing up with its bright promise out of the dark cool earth. 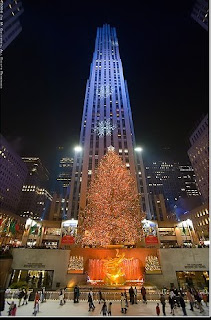 When people think about New York city and trees, their first thought is always, "THE TREE." When the Christmas tree goes up in Rockefeller center every year, tourists come in from all over the world just to see it. 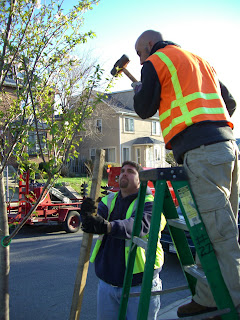 In my neighborhood there are not very many old trees. You know the kind. They spread their lofty boughs out over and across the sidewalk and road, creating a great green cathedral canopy of shade. They can make hot humid streets kinder and more forgiving, and they can break the monotony of cold winter concrete with an intricate weave of limb and branch. A few ancient ones are still around but most have declined and disappeared due to, just getting old, or the carelessness of homeowners or maybe a cruel blow from life itself. 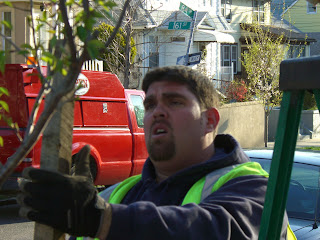 One cool morning I came across Joe and his crew staking a long row of young cherry trees. The work was hard and they were moving very quickly.
I knew they weren't city workers because, welllll, they were moving fast and working very hard.
They were a contract crew and the day before they had planted all these trees and today, it was their job to stake them all and make them more secure. 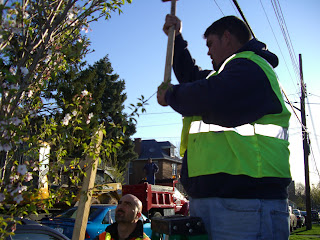 I got a chance to talk to Joe about his job,
between whacks of his sledgehammer, and the odd small curse at his crew for not doing their job just right.
He is just a small part of a city wide plan to plant 1 million trees in and around the 5 boroughs.
The first question I asked was simply, where was he from. I had him heard him speaking in Portuguese with one of his crew. He told me that he was born and bred in the good old US. His parents were immigrants from Portugal and he spoke it around the home while growing up. 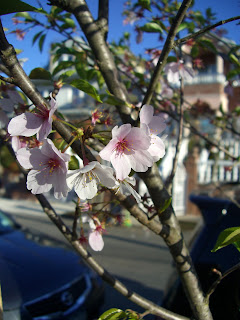 Of course I was curious if Joe knew how much joy he would give people, who would pass by his small trees, and watch them grow larger and more beautiful over the years. Also, I wanted to know if it would give him joy to come back in years time, and see how much the neighborhood would be transformed by his planting the cherries here, in the tiny green plots beside the road.
The truth was, I caught Joe at a time when he was all business. He told me that more often, his job required him to come back only when he needed to replace the ones that had died. He said what he like about his job most was the time off.

What I liked most about Joe's work, is that his contribution to the street,will be here long after Joe has driven off with his heavy sledge hammer and busy crew. It will still be here in years to come, when children are playing out on the sidewalk on early spring mornings. When the air is sweet and fresh and warm enough to be outside. They will turn to the flowering tree, between moments of fun and play, and just for a moment, really see the beauty in all the tiny pink fragrant blossoms, covering its branches.

They will remember this beautiful scene forever, in a deep calm and quiet quarter of their hearts. And when they grow older, and have their own children. They will one day tell these children, how they used to play outside beside the beautiful cherry trees in the springtime, when they were small.

This new generation of children, will just smile and laugh, because they have already played outside in the spring, in the summer, and all the long year round. They have already loved the brief glory of its flowers, but also found shelter in its shade, and then seen it stand tall and strong on a cold winter morning. Generations, will look up and love the cherry trees. They will never ever know that they were planted there, on a sweet March morning, in 2008, by a man named Joe.
Posted by Utpal Marshall at 4:58 AM