Time for Plan B 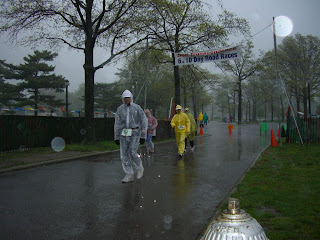 When I arrive at the race this afternoon, race director Bipin gives me this description of the weather, "the rain is not bad, its overwhelming." It has been raining steadily all day, and as I sit under the relative safety of the counting shed, to try and take some pictures, it begins to pour down heavily. It was wet as well last night, and I bring news to the crew, that after checking the latest forecast, it looks as though it will be another wet night ahead for them again. But most, if not all, are in good spirits. Over the years the race village has seen worse. I dare not mention the word, but I think to myse 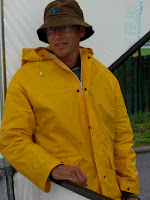 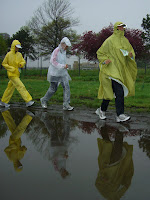 I am told by the joking crew that Aaron is the official Puddle Manager of the team. He tells me, "Its a loosing battle with weather like this, we must continue." The puddle battle goes on, with the use of men with brooms, and 3 pumps out around the course. 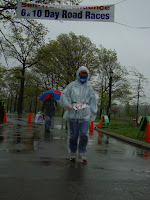 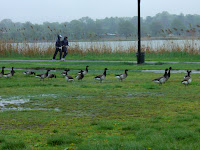 You might not recognize her from this picture, but here, buried under many layers, is Dipali(on the right). In fact, most of the runners, on a day like this, are hard to recognize. Just imagine how difficult it then must be, at night, when it is dark, and you have 75 different runners, pushing out of the wet darkness, into a slim pool of light. Dipali completed 105 miles in her first 24 hours. She tells me, that as long as she achieved over 100, she would be satisfied. Clearly it is tough for all out there, under these kind of conditions. She says to me, not with complaint, not with worry, but with the honesty of one who has been he 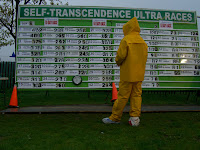 re many times before, "It 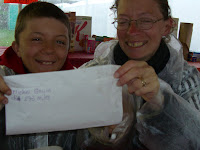 This is Tommy Gouin from Quebec, with his mom Chantal. Dad, Michel is doing very well right now in the 10 day race. Tommy had just run off to check his dad's mileage and has written it on a piece of paper for me. Chantal tells me that whenever her husband goes to a big race, the whole family goes as well. He misses school of course, but she home schools him on site. When I came in, he was busy looking at a school book. Chantal tells me, that it is a good experience to be together like this, and have new experiences. I ask her if her husband minds the weather. She says, "Its not difficult for him, he likes it." 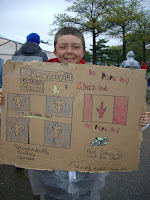 Tommy is very proud of this sign, but I think he is most proud of his dad.

click the button to see the Guoins run together. 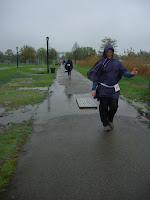 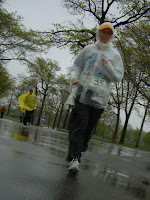 This is 63 year old Marion Landry(on left) from Montreal, finishing her 300th mile of the 10 day race. She, and her husband Donald, have run nearly every mile together over the last 5 days. Last year they ran the 6 day race for the first time. Donald tells me, "It was the best experience we ever had." When I ask, why they came back, and chose to run the 10 day race, he says, "we wanted to do it before we got too old."
I ask what made the experience last year so special. He says, "basically w 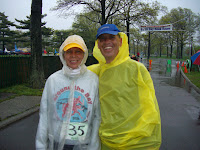 e got a positive vibe. It caused us to exceed our goals." He confesses that he sometimes gets grumpy, but last year he was happy the whole time. We run by Pranab, from the Czech republic, sweeping water off the course. Donald looks at this sight, with a kind of amazement, "They are working so hard to put this on, so we too have to work hard too." I ask him, if he knows much about Sri Chinmoy's philosophy, and he tells me, that he really doesn't know much at 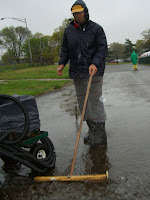 all. He says though, that by judging by the positive attitude of all those who help out here it must be positive. Then he smiles and adds, "it rubs off." 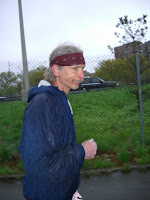 John Geesler is a little disappointed. He tells me that, as for attaining his goal of 138 miles, "before 12 hours I knew I couldn't make it." He now is adjusting to his second goal, which is simply to run now a good 6 day race. He would like to complete 500 miles in that race. He tells me, with a look, as good as possible on such a wet miserable day, "I will do, just as good as I can." 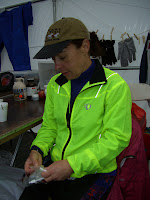 Barbara Sorrell, who wanted to run 80 miles for her first 24 hours tells me, "I met my minimum goal, I did 68." This is such a new event for her. She is a bit surprised, I suspect, that she walked so much. She tells me though, "I am a good walker." She is amused at all the things she is learning. She describes being, "reduced to basic elemental needs." She is amazed that everything seems to take so long. How it took her an hour to get ready this morning. She is proud when she tells me how hard she worked in the rain, but also gives credit to those who did a great job on the course. She tells me that yesterday's fear is long gone, that she is maintaining a positive disposition throughout the last day. "I was afraid, but not now." She tells me that reading the aphorisms in the camp kitchen have inspi 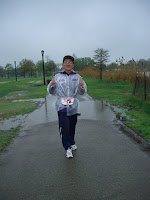 red her. I ask her if she is still on her A plan, and she says definitely yes.

Katsuhiro Tanaka is right now about 10 miles behind race leader, John Geesler. Clearly he is having a problem with his leg. He points to his lower shin of his right leg and describes a pain there. He has run so many races I ask if he has had this problem before, he tells me, "first time." 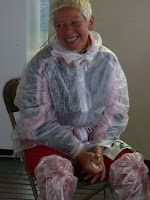 s a 64 year old runner from Russia, with very much experience at distance running. Last year she ran 507 miles here. She speaks very little English, so a friend comes by to translate. Before we talk, a young Czech runner hands her a new small red rubber ball. She is pleased. On clear days she will run for miles bouncing the ball in front of her. I ask how she is doing, "she says she is joyful in self transcendence." She says how inspiring it is for her to have so many young new people in the race. "T 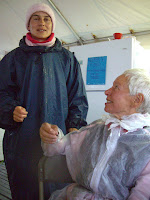 hey are bringing new aspiration to this race and to humanity." Referring to Sri Chinmoy, she adds, "this is what our teacher was dreaming about." She then tells me an aphorism she has written, and which inspires her. "The new millennium is knocking at the window, uncertainty is gone." I ask what she thinks her presence in the race does for the young people. She describes for me, that a person who challenges age and all boundaries can be fulfilled if it is God's will. She tells me, "there is no age limit, we are all on an eternal journey." 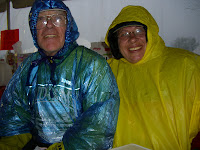 ord slip away. His wife Emma is here supporting her husband, and says of him, "he's a good guy, the best." I ask him what he will do now, he says positively, "I still have 6 days to complete, I have put in too much to give in now." He tells me it is now time for plan B. He is very proud of his wife and wants me to know that she is a runner as well, and that she ran a 24 hour race 7 years ago. He concludes, "I don't believe in giving up." His wife nods, "he doesn't" 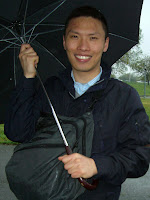 I spot Jimmy with his big umbrella. He tells me he comes by every day and lives close by. He is very inspired by all this. He calls it special. "6 days seems long but 10!" I ask him what he feels about the race, He tells me, "it makes me feel that I can extend myself. Even the term, Self-transcendence is perfect."
Posted by Utpal Marshall at 5:22 PM