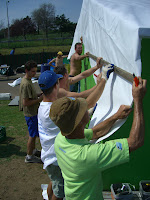 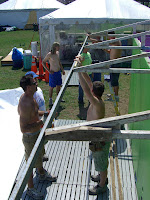 All the little bits by themselves don't seem like much. But when all the many walls, and floors, roofs, and rooms are put in place it is a site to behold. A small village will eventually occupy this prime piece of Flushing meadow park, with its superb lake view for almost 2 weeks. But if you are planning on checking out the accommodation, I wouldn't bother. The 80 some temporary residents have already fully booked the facility. They though, will not be thinking of relaxation any time soon, they will have only one thing on their minds. Running as far as they can for 10 or for 6 days. 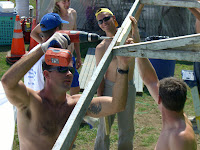 On this very pleasant April 19th Saturday, the volunteer crew, from the Sri Chinmoy marathon team, are putting on a white canvas roof over the kitchen area. It is hard to say which building in the village is most important, whether it is the food tent or the counting shed. My guess though is that this building, is the true heart of the village. Everyone of the runners will need each of their laps counted but they will find themselves rushing into the food tent, many many times during the day or night. 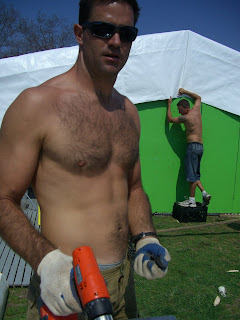 Asidhari says this is the 5th time he has been on the crew to help assemble the village. I ask him what he likes most, when he has to put in so many long hours putting up all the buildings. He says,"Its nice when you are here with lots of guys. When the set up takes shape quickly its great." 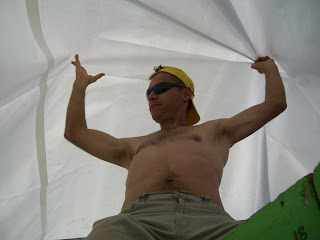 Rastia is one of two unique builders in the team. In just 4 days time he will be actually running in the 10 day race which starts on Wednesday. He feels it is, "great to stay in something you created." When I ask the obvious question, whether he will help with the take down after he has run for 10 days, he says with a wistful look, that betrays the immensity of the challenge that lies still ahead,"I hope someone else takes it down." 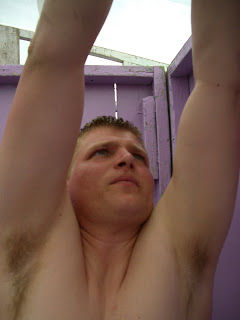 Runar from Iceland, is going to be leaving for Australia to be part of the World Harmony run, before the race even starts. He has not done this job before, but tells me how much harmony there is in the crew. He says it would be so much easier to hire prefabricated structures and just drop them in place. But then he pauses and says, "But it would not be as much fun." 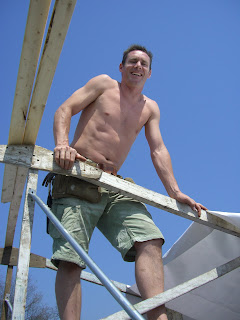 Hayden tells me that,"every time is a new experience." He has been at this for a few years. "There are 101 things to do. Always something new to gain experience from." He tells me all the many jobs are involved in assembling a project of this size. There is lumber, electrical, plumbing and much more. He calls it, "the whole work burger, the Supreme Sandwich." He says in reality it takes just a few days to put together this amazingly big and complex village. For him, "as soon as you put up the perimeter, it becomes a village."
He tells me that very year the runners who come here, from all over the world, are amazed. He tells me how the team he is working with is also from around the world. But he says that seeing the runners come here and use and live in this place reminds him 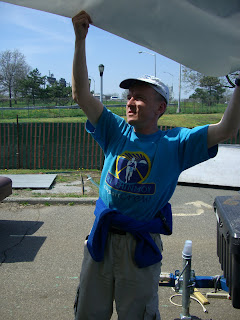 that all the oneness in the setup is aimed exclusively, as service for the runners.

Yuri says he just likes being with other students of Sri Chinmoy. He tells me that his background is electrical but here no job is too small. Each he feels is an opportunity to give some service back to the group. 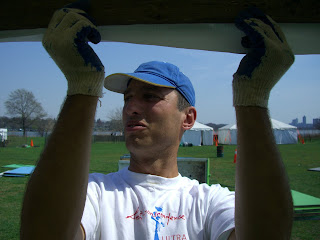 Mario is the other builder today who will be running in just 4 days. He first worked on the setup in 2000 and tells me that its, "much better than it used to be." It has developed over the years. He points behind himself to the already assembled dorm rooms. He said that at one time they used to be made from bent plumbing pipes, with a tarp over the top. Everything is of a much better standard now he thinks. It will be much better for the runners. I did not ask how this would all affect his 10 days here as a runner. 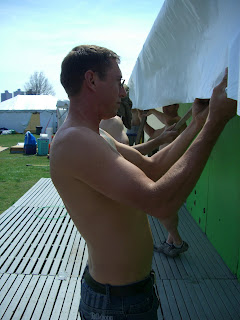 This is Aaron's second set up. He tells me he, "likes to wrangle," though I don't quite understand what he means by that. My assumption was, that he just likes to mix it up, with every kind of job involved here. He also likes the comradeship of the different nationalities.
He tells me that for him, the most important experience to take place here, is the transformation of the runners, who come out to race. He says he sees a transformation in their faces when they start running here. He said that for all of them, after 3 days of running whether they are suffering or not, "they are all having a spiritual experience." He says for him that is, "inspiring."

Anurakta is the 4th member of this crew who is from New Zealand. He describes how dynamic it is setting up t 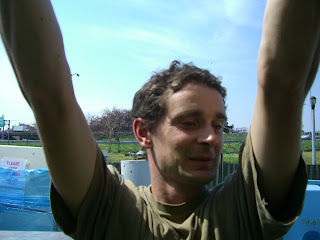 he village, and how he looks forward for the daywhen the runners move in and really start to use the place. He looks wistfully around at the great expanse of green and the lake nearby. He says, "this is the nicest part of New York." Then he tells me about the experience he had while running over to Flushing Meadow in the morning. He tells me how he has been noticing recently the marks still left on the roads in the area from the days, many years ago, when Sri Chinmoy himself used to run around the streets of his Queens neighborhood. At one time they were almost everywhere, but that was a long time ago. Only remnants of these mile markers still remain. He said, "It was touching to see the mile markers," for him this juxtaposed with the event, about to take place here, was a powerful reminder of Sri Chinmoy's presence 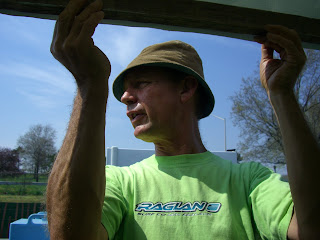 still felt in many tangible ways.

Bipin is the manager of this little set up crew. He was here when the very first multi day race was put on in 1983. At that time it was a 5 day race, and I point out to him, that it sounds to me like 25 years ago and an important milestone. He smiles and shrugs, its just his job and he does it with more willingness and selflessness than you can possibly imagine. He admits that the take down is harder than setting up.
I ask him when he feels that he is over the hump. He tells me that there is more than one hump. The first, he says, is the start of the 10 day race. The second, is the start of the 6 day race. Then with a telling almost prayerful look, he says, "and the last, when the first rains come." However, despite all its diverse and many challenges of the race, it is still clear that even after all these years, it is still, "a fun thing." 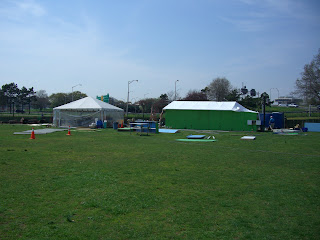 If you were to come by this little community as it was being set up, you would probably be surprised at just how much fun is had here. The boys work hard and play hard.
In the end something very unique is created here, in Flushing Meadow, for o so brief a time. It is a place, in which for 10 and 6 days, it will be both a battle ground and a place of immense inner poise and peace. On May 3, at that wondrous hour, when the bell sounds out, all who will have competed here will stop their running and all be champions. Then another crew of champions will move in, swiftly and willingly behind them, and take down with care, all which they so lovingly put up.
Posted by Utpal Marshall at 3:50 PM