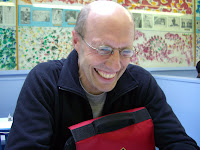 Madhupran is relaxing at the Smile of the Beyond restaurant and telling me why he has come back to New York to run another race. I had made a movie about him 2 years ago when he set the world record in the 3100 mile race here and he told me then, that it would be his last multi day race. Now, in less than 24 hours he will be joining 40 other runners in Flushing Meadow for the Self-Transcendence 10 and 6 day race.
Madhupran, whose spiritual name means, 'sweet soul', is all bright and youthful smiles. Yet what the face of this 52 year old runner from Solingen Germany does not reveal, the world distance record books certainly do. By any measure, he is one of the greatest distance athletes of all time. He tells me with utmost modesty, "I have so many records." In fact when he ran the 3100 here, in 2006, he set 70 records on his way to completing the distance in a world record time of 41 days and 8 hours. 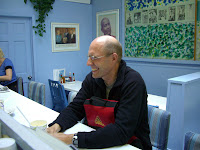 He says, as to why he came back, "I am running for Guru and not competition. I am running for joy." He states emphatically that he is not concerned about the miles he will complete in 10 days. "I am coming for the memory of Sri Chinmoy. That is why I am here." 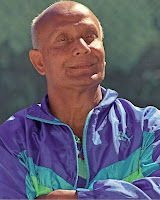 ot ever a student of Sri Chinmoy, but clearly there is a deep and loving inner connection between them. He tells me, that before each time he came to New York, to run one of the Sri Chinmoy marathon teams' races, he would have a vision. He then describes for me an experience, that took place, he recalls, in late September. He was asleep and around 5 o'clock, and then the room became all white and gold. He recognized Sri Chinmoy immediately, but was surprised to see him in his vision, as a strong young man, whose skin was youthful like a baby's. From this experience he felt and knew he must come back to New York in the spring time. When he later learned that Sri Chinmoy had passed away in October, it only strengthened his resolve. 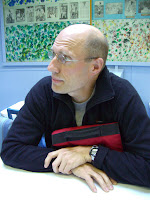 latively late to the world of running. It was while serving in the army in Germany that he was introduced to it. At the time he had never even run further than 100 meters. As part of training he had to run 5 km. It was in a race, which he ran and won, relatively easily. He then took to distance running and eventually ran a very respectable 2:29 for the marathon. He recognized that his body weight of 70kg was not the best for that distance and then focused his energy on ultra distance and multi day races.

At one time he was also deeply interested in operatic singing. He was practicing, both singing and running. His music teacher was not impressed that he was devoting so much time to sport. The teacher told him, "you will run, you will sing, not together." Madhupran laughs at this, his decision, "good, I run."

first time was in 1998. At that time he had never run further than 24 hours. Unbelievably he went from that to taking on the longest distance race in the world. He tells me, "I was mentally strong in 98." But what is also remarkable about this story, is that after running the 24 hour race in 1990, he took the next 8 years off, and then out of the blue, he decided to run the 3100 in New York.

me about the first time he saw Sri Chinmoy on the course. Madhupran was running on the loop, when he came upon Sri Chinmoy, who had been walking in the opposite direction. He tells me that when they came together Sri Chinmoy looked straight and deeply into eyes. He tells me he felt the delight of feeling like, "a hot shower came over me." He says that after that experience he continued on but felt himself crying with joy for one hour. "I was so happy."

He tells me that since he was the world record holder in the event it was especially hard to keep going. He describes how most record holders would have bowed out in such circumstances of being well back in the field. He was also so short of cash that he could not afford new shoes. Sri Chinmoy upon hearing this made sure he had 2 new pairs, right away.

At one point when he was at his lowest he got a message from Sri Chinmoy, "I meditate for you, I sing for you, You must finish the race." He was overjoyed and describes that by finishing under these circumstance, "I learned many things. It was a victory for me inside." 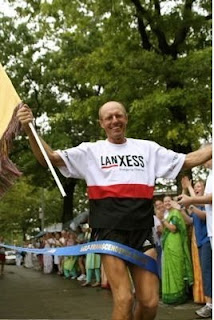 His world record performance of 2006 was a completely different story. He tells me, "the energy was so great, I felt so close to Guru." He describes how that every day he felt Sri Chinmoy was offering him prana (a life giving force.) He was able to take accept this inwardly and then direct it into his running. His spirit, enthusiasm, and comradeships was so noticeable and generous many other runners that year as well ran personal bests. They describe how Madhupran's race was an inspiration for them as well.

After relaxing at the Smile I drive him out to the race where he will spend the night. I ask him again, while driving on the Van Wyck expressway, if he just might decide to run hard. He smiles and tells me, that before he left Germany his wife said to him, "remember, no competition." 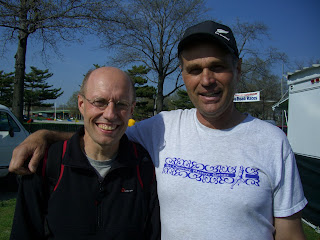 When we get to Flushing Meadow, I find Rupantar the race director of the 10 & 6 day. I ask him, what makes Madhupran so special. He says, "when it comes to running, he embodies true spirit of Guru's philosophy. Why to run, and how to run. As much as anyone."

I am about to leave the course and so I go and find Madhupran, to wish him good luck, for tomorrow's start. When I locate him, he tells me that one of his prized possession is a picture he has of himself, distance great, Ted Corbitt, and Sri Chinmoy. He sighs softly, "He gave me so much, now it is time to give something back, and say, thank you very much."

A beautifully inspiring story and the video really brings it to life.
-Shambhu

Âmazing and inspiring story. I wish Achim Heukemes could get a copy of it - he was very serious about challenging Madhupran in the race this year when we interviewed him at the 6 h-race in Nürnberg.

It's an inspiring story well told. I think it conveys very well the motivation of a great runner and the running philosophy of Sri Chinmoy

It made me very happy to read this story. I was a "counter" at the 3100 race in 2006, so I had the opportunity to see Madhupran running then. His good spirits for the entire time were awe-inspiring. I am so glad that he came to the 10-day race to honor Sri Chinmoy this year.
Bhadra

A great story! Madhupran is one of the greatest ultra-runners ever, and also one of the most spiritual. He told me in the 2006 3100-mile race (whilst we were occupying opposite ends of the mileage board), "here the inner runner grows strong, stronger, strongest!" That may not be word-for-word, but is certainly the spirit and essence of what he said. As Abichal (another ultra-runner) commented, "there's only one Madhupran!"