The Appeal of Banana Island 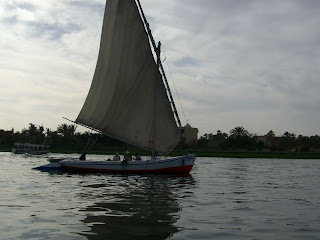 Muhammad, our guide, had been talking about the importance of visiting Banana Island almost from the moment we had stumbled off the night train from Cairo. I had given so little thought to the idea of going there, because there were so many wonderful ancient sites to take in while staying in Luxor. Well sure enough it was our last afternoon and he said to us, that we had to go, and furthermore, that it was arranged that we would sail there on his cousin's 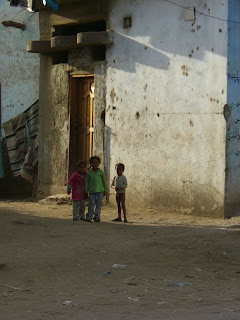 boat, and yes we would not believe how wonderful it would be, and how many bananas we would receive. A boat trip on the Nile sounded like a great idea and though none of us, was much interested in eating bananas, we reluctantly gave in. Some suspicions crept into my mind when we got to the boat and saw the two young surly men who operated it. If either one of them was Muhammad's cousin I would have been surprised. Still, soon we were swiftly moving along in the wonderful and warm afternoon light. The ride was short though, for our liking, too short. We pulled into a dirt bank and with a few steps found ourselves in some kind of picnic area with a bunch of tourists and tables. True enough piles of bananas were being carried gleefully out and placed in front of people. Some looked interested or hungry, I am not sure. I for one was livid. My ripoff meter had been warning me for some time and now it was glaringly obvious that we were now 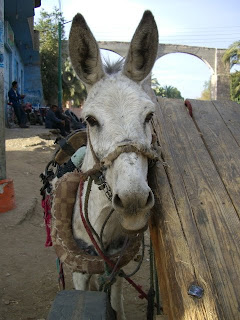 captured in a tourist trap on our last afternoon in Luxor. We had yet to even visit the temple of Luxor which was just across the street from our hotel. I stood up and said, "No way, am I going to sit here looking at bananas." We asked to be taken back to the boat and just to go for a ride. It was not possible he said. The best we could do was to go for a walk down a little country road. From the first step it became one of those magical journeys. My disappointment just evaporated after taking barely even one step. It became instead, one of the best experience of my stay in Egypt. We met dozens of warm and interesting people just going about their lives, and who were willing and happy to have their pictures taken. It was a chance to see rural Egypt in a way that was natural and not forced. 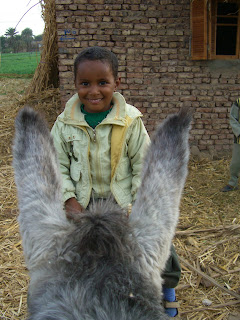 We walked by small homes and were allowed inside. There were no cars or motorbikes, just donkeys and small wagons. This young boy was so delighted that we had come along, and he felt so satisfied with himself, that he was old enough to be sitting on his family's donkey. 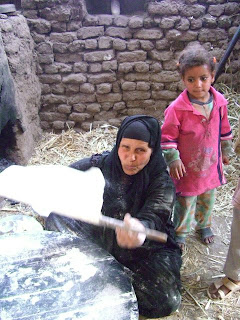 This elderly lady is with her grand daughter in a small building which is just used for baking. The bread is thin and crisp and you have to be quick and alert to bake it just right. She was happy to show us how it was done. I bought a big bunch of it. 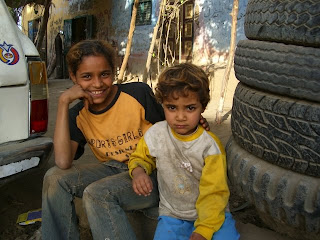 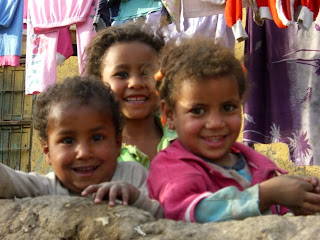 These kids were playing behind a low stone wall. Their mother was hanging up laundry as I passed. They were so small I asked their mother if I could take their picture. She smiled and nodded yes. They just smiled as if there was no tomorrow. 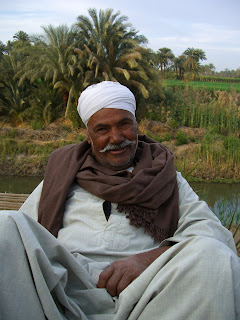 It somehow had become a perfect afternoon. Everything I had wanted for, to meet local people in a relaxed way, to take some interesting pictures of local people, and have some stories to tell, had taken place in a flash. It was though a genie had come out of a bottle and fulfilled all my wishes. It was perfect.


On the sail back to town I had one last dream fulfilled. I have an old picture taken 20 years ago while sailing on the Nile near Cairo. It was in 1988. I didn't quite remember how it was posed but asked one of the boys
just to take my camera and take a shot. As I stood up on the bow, I didn't feel like I was posing really. I was thinking, what a great afternoon. I was just so grateful to have had it, and been able to share it. 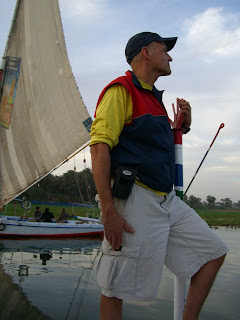 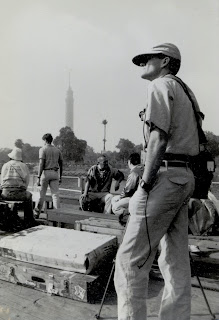 Posted by Utpal Marshall at 4:10 PM