I really have no idea how this photo found its way back into view after so many years.  My brother came upon it quite by accident, going through a collection of my parent’s things.  He does not remember exactly how and where he found it.  Yet when his eyes and fingers came upon it he immediately knew, that when the current version of that young man saw himself, he would be shocked.

He never mentioned or hinted at all about his obscure discovery.  Instead he cleverly tucked it casually into the lower corner of quite another picture.  For weeks it was unnoticed and certainly unrecognized by most glancing eyes passing through his home.  Perhaps being judged by the few who noticed it as simply some wild hippy stranger from my brother’s past.  He, all along knowing that my inevitable collision with it would set off a dramatic and profound reaction.

It rested there mostly unnoticed until I recently came to visit him in Canada.  It was stuck in the frame in the lower corner of an unremarkable landscape.   So when I just happened to glance up on the shelf where it had been placed.  I bellowed out an unrestrained yelp of recognition.  In an instant I bounded across the floor to see it more closely in my hands.  All the time feeling a strange battle raging inside, one composed of equal parts of dread and wonder.

No longer able to continue to grasp firmly to the present I found myself flung instantly back into my past.  One, that under quick calculation, had to be many decades distant.  I was certainly not more than 20, nor less than 18.

For me the conflict was simply seeing myself, at such a precious time in my life.   Which now in retrospect I believed I had to be at the very beginning of my life's adventure road.  The person starring back at me was filled with such innocence and unblemished youthful vitality.  Still to be shaped and formed by all the learning and life experience that has taken place in the years, that separates the current version of me now, from who I was back then. 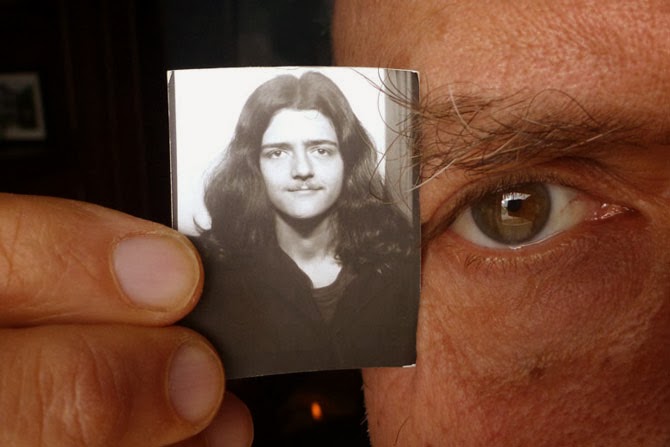 .It was not that I did not know that such pictures existed.  It is just that I had not seen this particular version of me ever.  Or at least not one so close to the time when this photo was first taken.  Instead in recent years I have only seen the safe and simple ones.  Baby photos, early classroom shots, all images of myself, securely caught up in the comfortable certainty of childhood.  Not a young man who has just begun to sample vitally and fully all manner of the adventures that are composed in the great world around us.

Now a days practically all the phases of our life can be almost continually captured, and then instantly displayed somewhere in the immeasurable electronic void of the internet.  A place, in which untold millions of us can and do discharge vast quantities of data, helter skelter, every day.

Despite our knowing how little comes to rest before caring or even interested eyes we still do it.  Each text, tweet, and email rushing here and there and yet so little of it touches or reaches others and has any meaning.  Every stroke and tap of a keypad streaming at light speed on electronic pathways that hardly ever lead to any real destination.  Or at least a destination that matters most to us, our own hearts

Of course this story is one of those same things.  I am one of the guilty.  Sending my thoughts, and now this image out into the world.  Yet if there is any true importance in all this, is that my discovering of this picture inspired me, and if I am lucky, you too might find some tiny inspiration.  Be reminded of what a remarkable journey you also have taken over the years.  And perhaps more importantly, just how far we all have yet to go.
Posted by Utpal Marshall at 4:32 PM 3 comments:

The Road That Passes By

Quite often I will see something extraordinary and have the idea that I can hold onto it.  Continue to extract from a fragment of time something even more precious and meaningful than what it had originally offered.

Because I so often carry a small camera there is always a hope that it will somehow graphically aid me in this process.  Perceive the scene or event with a comprehensive permanent bundle of digital bits what my eye had just momentarily glanced upon.  All so I can then replay in my mind a singular special moment.

A week ago the weather, in not just this little strip of Canada but also across a great swath of the northern states were affected by the perfect confluence of dangerous weather patterns.  An immense wet mass of air rolled eastward across the Great Lakes and absorbed even more moisture into itself.

At the same time a cold front pushed down from across the harsh northern country side.  There was then an immense collision, that under any other circumstances would have normally forced the huge, now merging weather patterns to release its burden of moisture as a swirling blizzard of snow.  But this did not happen.

Instead the thermometer clung to its tenuous grip on fluidity and instead remained teetering on the brink of freezing.  A precarious position as the clouds could no longer hold onto their immense burden of moisture.  Curiously, in a strange coincidence, the earth below and the atmosphere in between were set at a slightly colder temperature.

The end result is rain that plummeted down through the slightly milder atmosphere and then instantly froze on everything it touched.  What then occurred was a slurpy cold deluge that continued dangerously for hours in many places, and by coincidence or quirk of fate, froze into a delicate gentle beautiful glaze in others.

Many days have passed since this all took place.  In Toronto there are more than a few who have been dealt the harshest fate of this bizarre trick of weather.  No power,  trees stripped and broken, and lives now forcibly detained in un heated unpowered homes with no sure notion of when all this can be cleaned and cleared  and sorted.   Their lives most certainly drawing closer to normalcy but one which is still unpredictable.

Down here in little Goderich nature offered its most gentle frozen blessing.  No lives put under duress, no trees and buildings damaged, but instead what happened was that fickle nature offered up a delicate translucent non threatening veneer of ice.  That now, after so many days has yet to retreat under the slight advance of warmer temperatures.

My brother, along with my Mother and I had just come back from visiting a Mennonite wood shop.  A place not so far from the bustling town but when you enter this interesting little community of horse drawn carts, men with long scruffy beards, and women dressed in bonnets and long skirts, everything then begins, to my eye at least, to look different and unique.

So as we drove back closer towards the modernity of town, nature all around me looked more interesting and delightful.  The tired sun was drooping lower, and for a moment the clouds opened up and allowed a burst of light to dazzle the icy glazed trees that framed the clear dark road.

For just a moment my brother pulled his car to the side of the road and I got out.  Still just a little too far off from this glistening tree for the camera to frame it just right. So I continued to march towards it on the narrow slippery shoulder of the road.  With each slushy step the sun crept closer towards ducking entirely behind the clouds. 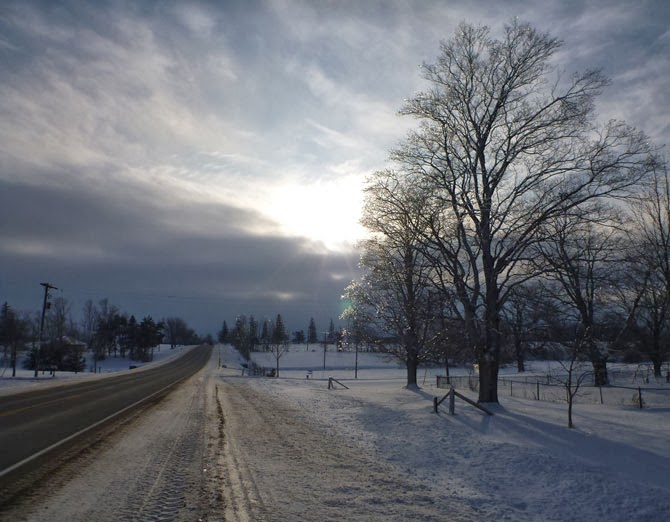 .I had time to click just one picture before the curtain of cloud and dusk fell down around me.  Then, just like that, natures moment of perfect light and magic was over.

I clomped back through the frozen slop to my brother's warm waiting car.  Clicked my snowy boots together to dislodge the slush and then hopped into the back seat.

In an instant we were hurtling back towards the well maintained orderly streets of town.  The still and snowy countryside slipping away behind.  The trees that had glistened so brightly along the edges of the sleeping fields now bathed in the total darkness of the night.
Posted by Utpal Marshall at 6:54 PM No comments: