Everything in Nothing, Nothing in Everything 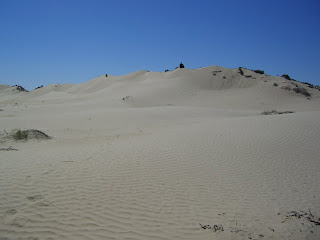 We had been driving due south in Tunisia for some hours, and then it happened, we came upon the Sahara. You are mentally preparing for it, with every dry mile, with every diminishing scrap of green. Then it is just there, vast and incomprehensible. To your feet, it of course feels like walking on a soft beach, but in your gut, you know that over this dune, and then the next, is just more desert.
click on this image to make big...there is a man on a hill in the distance. 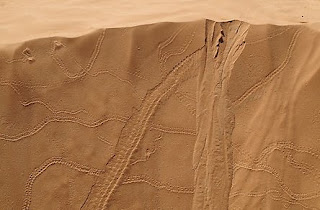 The miracle of the desert is that life exists there in so many subtle and amazing ways.
Immediately you realize that place is filled with absolute silence.
Because there had been no wind, before we arrived, the sand was still covered by small, almost invisible tracks, of creatures that could not be seen. 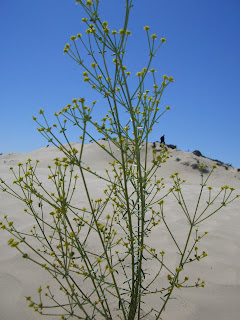 Every bit of green vegetation stands out like a beacon of life. Because it was spring, and there was enough moisture in the air, and the temperature had yet to make the sand bake, there were beautiful flowers here and there. 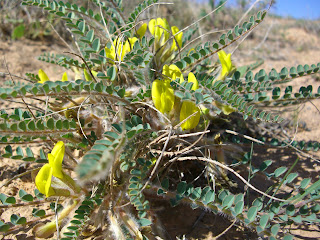 Some so precious and delicate it was almost impossible to believe. 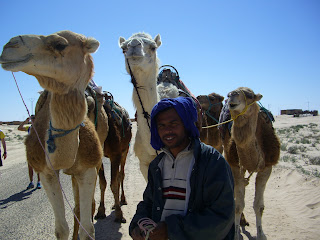 When you trekked back across the sand and over the dunes to the road, you could see life was much different here. These camels are not for tourists. Not for the idle ones who drift down the highway from the lush north. These were working camels. Cared for by a man who worked them every day and still could smile. 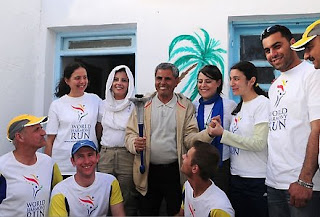 A very different sort of miracle took place in a very small town near by called Douz. By chance, or by a miracle perhaps, we came upon Tunisia's most famous athlete and one of the greatest distance runners of all time, Mohamed Gammoudi.
He had long been a hero of mine and I never even dreamt that I would get a chance to meet him. He had won 4 medals from 3 Olympic games, a gold, 2 silver and a bronze. He was proud to be the first Arab African to win an Olympic medal. 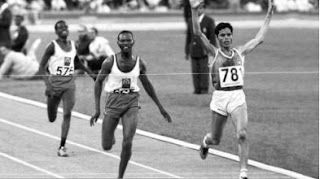 In this picture he is beating the legendary Kip Keino in Tokyo to win his gold. According to Runners World magazine he will have figured in 2 of the greatest distance races of all time.
Once in competing in 1964 with upstart Billy Mills of the US, and then 8 years later when he was tripped up by Lasse Viren in the 10,000.
I will tell him that I had truly wished to see him compete when I attended the 1976 Olympics in Montreal. He will gaze at me with a wistful look, and say in Arabic, "Ah, the African boycott. It was to be my fourth and last Olympics and I was in the best shape of my life."
He will then turn to me and smile boldly. It will be the expression of a man who has achieved much, has long ago released his grasp on any regrets in his life, and has gone on to use his fame for the betterment of sport and the people of his country.
"Sports is the best way to gather people together. With God's help I hope all the world lives in peace, and all the wars and problems stop." 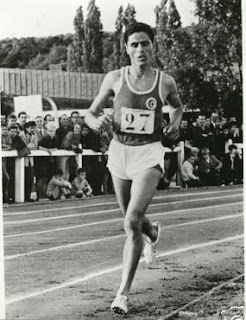 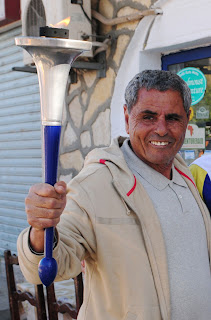 Posted by Utpal Marshall at 1:39 PM