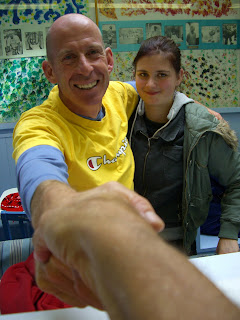 This is the kind of scene I like a lot, a handshake and a smile, first thing in the morning. It is one of life's little pleasures, the kind of thing that can make my day.
This is an old friend of mine named Udipan, and one of his daughters. He and his family are visiting New York right now from New Zealand.
There are a lot of folks in town now visiting, who are members of my group. It is a yearly celebration that takes place over 10 days in April. A scene like this reminds me that we are all part of a big family. One that manages to collect itself together from all over the world.


Of course you don't always get this kind of cheery greeting. Sometimes it is just about food and phones. 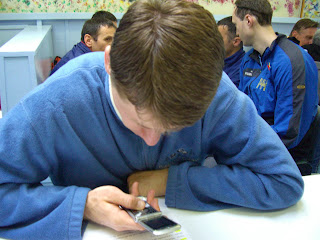 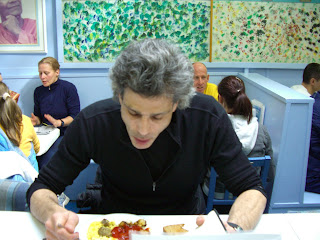 People will come in to my place of work, deep in their own little worlds. They require little from me other than to prepare their food. There is no exchange of much energy at all really. In the course of a long and busy day this is okay. 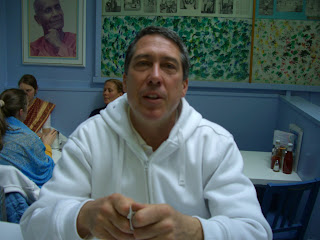 Then there are those like my friend of many years Annugata. He often has interesting views of life and his place in the great struggle to evolve.
His views, by many, might be considered a bit unorthodox.
He is telling me about a realization about existence that he came upon for himself the other day. I am really busy preparing something, and encourage him to tell me all about it.

He says that this is not the time and place, and I suggest, that true, this is not a quiet and contemplative garden, in which to discuss the issues of life, but that nonetheless it is after all, The Smile of the Beyond. A place that takes equal pride in food as well as philosophy. 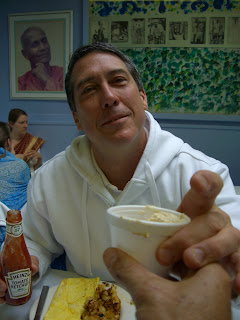 So he describes for me his observation that all people are capsules existing in an infinite universe. It is their responsibility and task, to become aware of this infinity around themselves, as they grow in life. He says, if people are unprepared for the infinite and just let it in, they will simply, "blow up." I don't think he came up with a description of what that would sound like.
He also said, "that what allows you to open up to it over the years is your meditation." The more you become aware of this, the more you like doing it.
He says, "it took me 50 years to come up with that."

I hand him a cup of tofini, that I just made. I tell him that, in the same time it took him to explain the meaning of existence, I made a batch of tofini.
While he is solving the mysteries of the Universe, I am trying to feed it.
I also said, that to get to hear, the meaning of life explained to me in just 20 minutes was well worth a 4 ounce cup of tofini.
Posted by Utpal Marshall at 4:10 PM