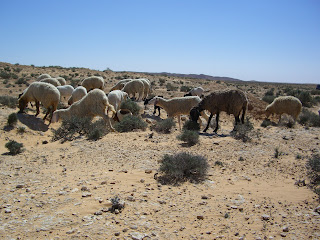 As I look back at my visit to Tunisia I am surprised at how very little I knew, before arriving, about the country, its people, and the places we would visit there. I suppose that I pictured that it would be like Egypt, which it wasn't at all. On one of our first trips we headed out from Gabes towards Matata. 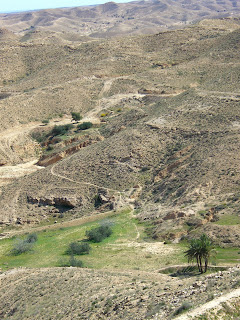 It seemed as though, that every mile we traveled from the Capital Tunis, was towards more desert like conditions. From time to time you could see small Berber camps out across the dry flat plains. Sheep were gathered in flocks wherever there was even a speck of green.

Then, for no apparent reason, there would be a very small Oasis. A lush expanse of green surrounded by rock and desert. 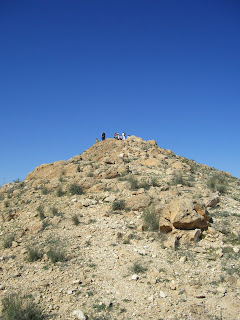 We had stopped for tea once and I went off across the plains to try and photograph some sheep. I had brought with me a treat for the shepherd, who looked as though he most likely had seen few tourists, little alone ones with bits of cake. You could hear the snip, snip, of their teeth tearing at bits of weed. They moved and ate and never seemed to stop. I sat in front of them as they nibbled and chewed towards me. I was waiting for the ideal shot that would have come but for the fact that one inquisitive sheep, stuck his face so close to mine, I could not shoot. I rubbed his ears instead and he wandered off. 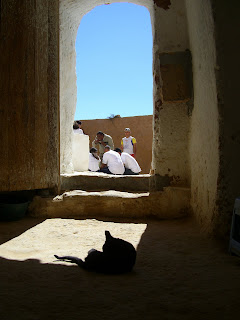 We stopped at another place where fresh bread and tea were served. Here the men are dipping bread into a bowl of olive oil and honey. A traditional meal.
A cat, who lived here, and was not too interested in people, enjoyed a nap away from it all. 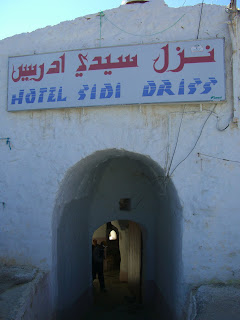 Then we came upon something that everyone recognized. It was a location in Tunis that had been used 30 years ago for the original Star Wars movie.

Everyone could quote lines from this movie. I sighed with relief. The force was with us. It took me several hours to stop from quoting Yoda.


Do or do not, there is no try 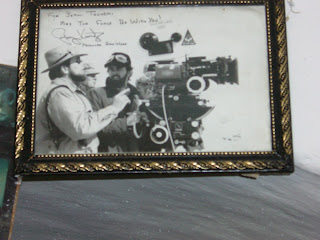 When you wonder how set designers, sometimes come up with other worldly sets, when you come here and see this, you can easily realize that in this case, it was very much part of the real world inspirsation. 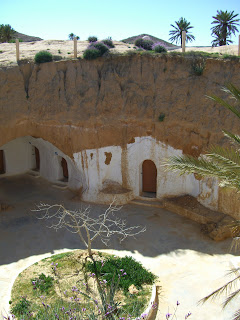 The place is several hundred years old and there are a few other similar homes in the area. I never learned if they were a case of, man taking advantage of nature. I do not know, whether or not, the deep holes are all naturally created, and then man came along and simply dug out the rooms. Or just that to escape the heat, they just dug everything out. I suspect after wandering around that nature came up with the concept first.

Its not clear to me, if it is just tourists who book into the hotel, who want to take a nights rest in a place far away. Or whether regular terrestrial travelers come here as well. The rates are very reasonable, but you don't get any windows. 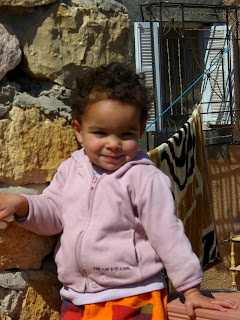 I for one lost interest fairly quickly. It is people who interest me most. And this little kid lived just down the street from the Hotel. The people here have probably seen more tourists than they would like. No doubt they come by the bus load.
To see a face like this, I would come a long way too. 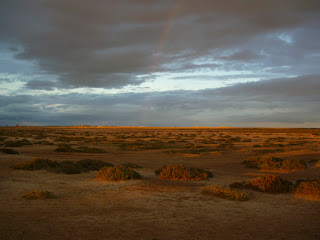 It was very much a sight seeing and recreation day, this trip out of Gabes. Our van with guide was moving along most of the day and we could just look out and take it all in. The landscape, nature, its people and begin to understand and enjoy the experience which is Tunisia.
Posted by Utpal Marshall at 7:09 PM