Food For the Soul 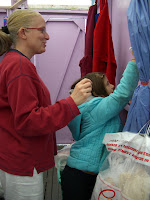 a, a little girl who seems to have made the camp kitchen her second home and personal playground, what she thinks of Sushovita's cooking. Without hesitation she tells me, "She's an awesome cook." This statement is one of the universal sentiments, that is heard often, about her work here. Spoken not just by a little girl this year, but by all who have been fed and supported by her efforts, for every, of the many years she has selflessly dedicated herself to this daunting task. A responsibility for which the performances and well being of the runners, depends upon, over the many long days of running.
At this moment, during one of the brief lulls in this very long busy place, Alika and Pratibha are playing a game of tic tac toe on a board. Pratibha tells me, that she has been helping with food preparation for 3 years now. When she speaks of Sushovita's service here she glows with affection, "She cares so much about the runners. She is delighted when the food gives them joy." In a place in which not just 3 great meals are served a day, but also terrific snacks, Pratibha says of Sushovitas many long hours in the kitchen, "For her it is a super ultra marathon. She really feels an inner commitment to the race." 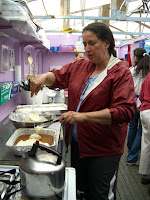 There are many facets to her work as well. Manjusha says how terrific she is at even something mundane as shopping for supplies. She says, "she is aware of finances, and shops for the best price, and saves the marathon team money." Pratibha tells me, that she in many ways lives and breathes this race. She is often experimenting with recipes and will sometimes leave samples by her door for her to test. She calls her creations, "very simple and flavorful food."
Manjusha and Pratibha speak at length about the whole history of food at the multi day races stretching back 25 years. 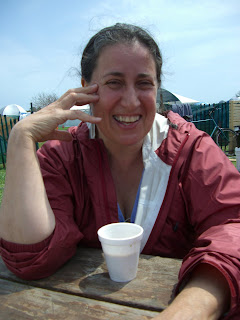 In the early days no one really knew what was required to put on such a unique and complicated event. One day somebody realized, "Don't you think runners should eat?" The early solution then was basically to seve bagels out of the back of a car and miso soup. Today's kitchen was even designed by Sushovita they say. "She is 120% practical at every step."They also say, "She is the right blend of dynamism and tender heart, she cares."
They describe how Sushovita is in sync with the cooking, at so many levels. They describe her as one, who not only has a willingness to serve, but that she has also found a special niche, in which to stretch her capacity. The important thing, to complete this circle then, is a real need for the work you do. When you see how often the runners come into the Sushovita's kitchen, it is easy to understand the need. 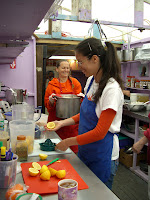 For Donka originally from Bulgaria and now living in Seattle this is her third year as a full time helper. She tells me how she came to be part of the crew. Her first year, she had some free time and thought, "10 days, why not." She smiles at this and says simply, "I loved it."She tells me, not just about her work in the kitchen but as well of the whole race, "special energy, special people run, special people help, the whole experience gives you joy." She tells me about this as well, "I feel Guru here." 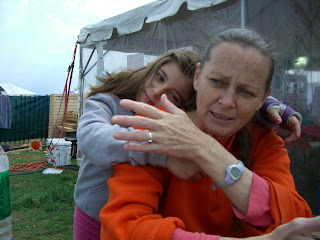 Sushovita has been reluctant to put herself in the spotlight in any way when it comes to her work as chief race cook. Eventually I corner her and ask her about her long involvement with the job and what keeps her going at it. She tells me that her first experience at food service took place 15 years ago in 1993. She offered to help, she says, and pretty much ended up organizing the whole thing.
She tells me that she has no food background and learned the hard way, from trial and error. She groans as she describes how at that first race it rained for 13 of 18 days and that, "runners dropped out like flies." She tells me that she never takes for granted any aspect of the job. Not one for frills and experimentation, "I am a basic cook and give the runners what they need." This is no small point, as the digestive systems, and the attitudes of runners, over the many grueling days, can become very sensitive. 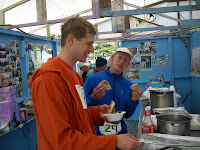 I then ask about her hours, and she describes the days, when she even slept at the camp herself, in order to better serve the runners. She is amused at this, and tells me, "It doesn't work." She could rarely sleep here, due to the constant buzz of activity and the noise.

She tells me that she comes now, every day about 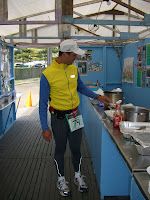 5, and when the new race starts, it will mean coming even earlier, at 4:30. The day will end usually about 9 in the evening, but this of course can sometimes be stretched even later. Out of curiosity, I ask if she has time for anything else in her day, like meditation. She laughs at this, "This race is my meditation." She tells me that as the runners are trying to transcend themselves on the track she is trying to transcend herself in the kitchen. She says, "it is hard for everybody, but we are all in it together. I have known some of these runners for years, we are all family here." 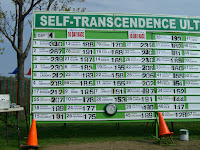 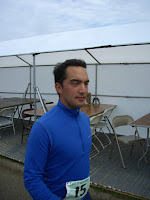 Viddyut is only 25 but already has 8 years of ultra distance running under his belt. He tells me that he believes that, "human beings are inclined to transcend." He relates how there is a natural process in people, that drives them to, "bigger, faster, and better." He describes this as what compelled the 4 minute mile to be broken and Mount Everest to be climbed.
I ask him how he took up such a difficult sport and he tells me that initially, "I hated running." He had become Sri Chinmoy's student in 1996 and he says he became curious, as to why people ran. He tells me, "I wanted to understand why people ran marathons." So, with that question as inspiration, he trained 7 months for his first marathon, and then was able to run 3:47. I ask him how it felt, and he describes how he felt empowere 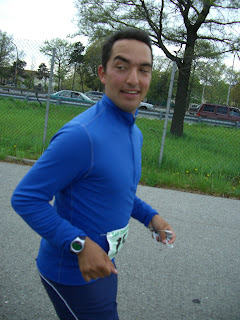 d, and a sense of joy in comp 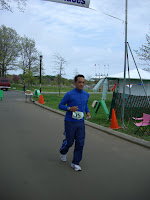 leting it.
He tells me, the qualities he feels he is developing on every level, by running now, are determination, patience, and cheerfulness. He says, "these are qualities you need to be successful." He tells me that recently he has understood the simplicity of what this sport means in his life. He smiles and says, "I love running." When I ask him what he feels about the absence of Sri Chinmoy at the race this year, he pauses a moment in deep refection, then smiles again, and says, "I feel like he's here." 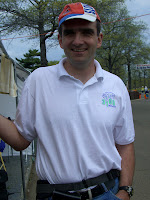 Pranjal, from Slovakia, is a very experienced multi day runner. He has run the 3100 mile race 3 times. He will start tomorrow in the 6 day race as a training run for this years 3100. 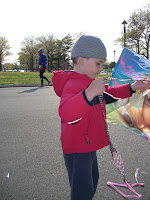 Loyd is a little boy out for some fresh air with his nanny, who is resting with her shoes off on a near by bench. He is more interested in his kite than in the runners who go round and round. He wants his kite to go up and up. 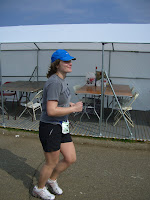 Shishaldin tells me how wonderful it is to be here. "I get to spend 10 days in this beautiful park." This is her first time running for 10 days. She has run the 6 day previously here, twice 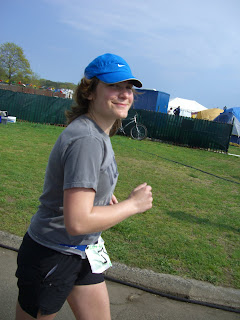 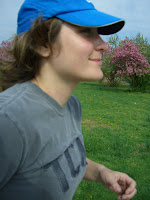 the course as a,"break from reality." This time allows her to focus on herself. She tells me now, that she is happy, "I feel good, I have no complaints."


Before I head home, I make one last, unauthorized trip through the camp kitchen. Now, very busily involved, with the preparation for the evening meal. Tomorrow it will get even busier here, not just for the cooks, but for the entire village, as the 6 day runne 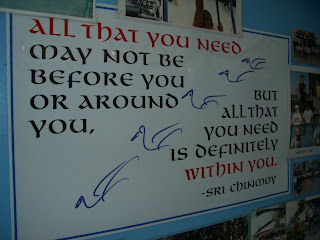 rs start. On the walls of the kitchen are some photos of those who have been part of this race, over the many years. It is the only place in which the wonderful long history of the race is honored and preserved. People who walk through here though, are very much concerned with the present. To gather fuel for one more mile, for one more day, to break through a distance they may never thought possible. To transcend within themselves barriers both human and divine.
Posted by Utpal Marshall at 4:08 PM