Luis Rios, from Brooklyn NY, is 60 today. For most, this would be a big deal, but Luis does not appear too concerned about it. He is equally not worried, whether or not anyone else makes a fuss either. Its ar 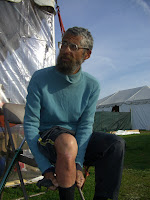 rival this morning, though, has nonetheless inspired some fuss and many well wishes from his fellow runners and the helpers around camp. He was presented with a cake of course. Not much for fan fare, he did say however, it was his best birthday party in a long time.
Truth be told, over the past 10 or 11 years, he has spent every birthday on the course of a Self-Transcendence race, because of the scheduling of the race. He hasn't asked for much in the way of presents, other than to have a day without rain, and some sun. Nature, very nicely answered this request today, for the retired transit worker. He tells me, "my prayer was answered. Nice gift doing what I like."
I ask him out of curiosity, just how long he has been running. He tells me with surprising detail that as of February he has been running for 31 years and as of December he has clocked 200,000 miles. When I question how he can be so certain, he tells me that he has logged every mile of every day since 1977. 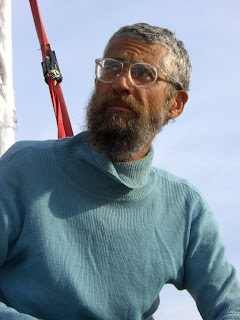 I am puzzled at this attention to detail, and then Luis explains that he started the whole logging practice at first, in order to keep track of how much he was drinking. For a time he was keeping track of both drinks and miles and then he says, "you can't run and drink, so it cured me." As to why he continued to keep such rigorous track of the miles, he says, "I'd rather be obsessive about the miles."

He said when he first came to the Sri Chinmoy marathon team races he pretty much kept his distance. He says, "I am really shy." Something changed in him, he says, 7 years ago. He began to identify more with much of the groups philosophy and ways. He said in a couple of areas of lifestyle he has some differences but overall he says of Sri Chinmoy's path, "I am with his teaching."

I asked him if he had any personal relationship with Sri Chinmoy and he says, "I always looked forward to seeing him," when he came to visit the races. When it came to the time whe 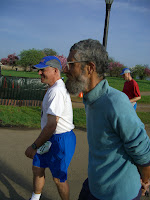 n Sri Chinmoy would offer prasad, he says that he always called him Luis, and he would call him Guru. He tells me, "I am surprised I miss him."

He says that he was always surprised to see Sri Chinmoy's picture so often whenever he traveled in vehicles with any of the students. He then recalls reading in the Daily News, back in October, that he had passed. He says, "I felt bad." What he did then was to cut the picture out of the paper and paste it to his refrigerator. He tells me, "everywhere you went you saw Guru's picture, now I am doing it." 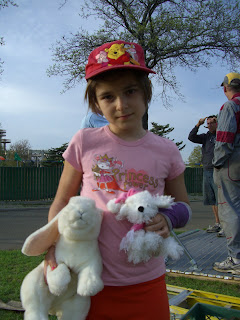 Alika is a daughter to one of the runner's helpers. Her two own, very special friends, are Poppy and Cocco. 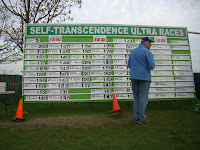 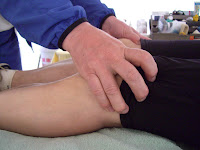 I visit the men's medical tent and watch as Pradyot works on Tamas from Budapest's legs. He tells me, as the patient under his fingers squirms with pain, "I make his life miserable." Tamas quips back, "He pretends he is a Doctor, magician, he is nothing but a horse Doctor." After the bantering goes away, Tamas tells me he has done the 6 and 10 day race many times. Referring to medical he says, "it helps a lot." Tamas relates numerous times during races when just the right adjustment can get him going again. Then, just like that, he is out of the tent himself, and back on the track. 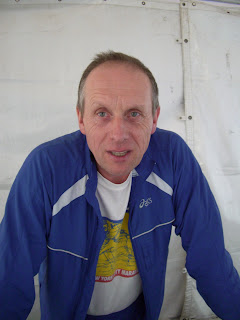 Pradyot then has a free room with no patients. He tells me he started helping with the races back in 1998. He had taken a special course in Switzerland and describes the challenge of coming to New York and the enormous responsibility of taking care of 15 runners. He is amused that now he will have 47 runners to look after, when the 6 day race starts in a few days, and he is not worried at all.

He tells me how he is always learning something new. He says, what is special about the race, is that everyone here is also learning, the runners, the helpers, everybody. That each faces problems and that each has to get over it.

He says that the medical area is a place for compassion. Sometimes the runners are better just by coming inside the tent. This is all they need, he says, "sometimes no treatment." 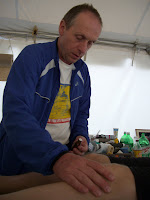 He also feels that the race is also very significant outside the boundaries of the one mile loop. The fact, that all these people collected here are transcending themselves, "this affects the whole world." For him he is amazed at, "how they can do so much." Further, "when one individual transcends, they open something for each and every one. This inspires me." As for his own capacity he says that once he could barely help 15, "Now I can take 60 or more runners." 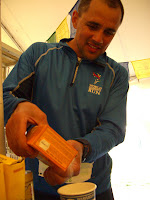 While we are talking Misha from the Ukraine comes and asks for some baking soda for a bad stomach. Misha tells me that in the Ukraine this is how people fix bad stomachs. 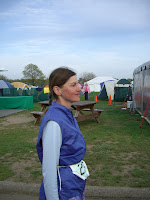 Kaneenika from Slovakia is currently the women's race leader. When I ask how she is doing, she tells me, "I am feeling fine." As we are talking she is running pretty fast. I am finding it hard to take notes and keep up. She says that during the race, "I get an opportunity to work on my self inside." She says that without her inner connection to Sri Chinmoy she would never be able to do it. She says that she always likes to transcend her previous miles but mileage isn't everything. She feels that on the course she is also, "trying to know myself better. Something inside brings me here."
I ask her what help her sister Maheeshi in partic 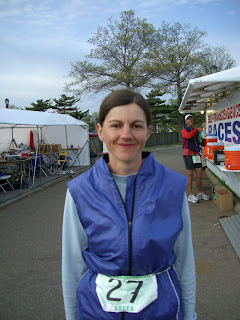 ular does for her. "Besides helping me outwardly, she supports me as a sister. She is always there, when I am down. She inspires 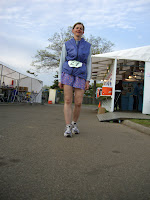 her so much.
She then tells me the story of her first 6 day race in 2001. It was a new and challenging experience and she was cautious about how hard she should run. At the end of the race, Sri Chinmoy said to her, "You can do more." She says that she was shocked by this. Shocked because he was so right. She still remembers this when she finds herself not giving 100 percent. 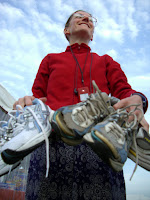 While Kaneenika is off once again on the course I ask her sister Maheeshi about the experience of the 6 day race in 2001. She tells me that what Sri Chinmoy saw in her sister she also clearly saw as well. Before her sister started running she used to crew for 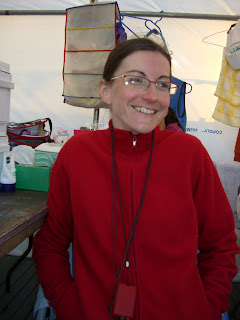 Dipali. The year she broke the world record she says that it was a beautiful experience, and be part of the race. Last year her sister was injured and so could not compete. She said that this was a tough experience for her. "I missed it a lot, I really wanted to be here." She calls the event here, a Sri Chinmoy running loka, a very unique and special universe in a way dedicated purely to distance running. It is, "so nice, like a family." She smiles even more as she describes, "the presence of Sri Chinmoy is so strong, I do not want to miss it." 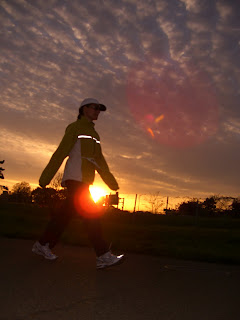 As I am le 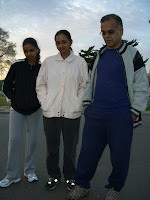 aving, I find the Sridhar family reading a race poster beside the course. They live nearby and have often seen the race going on here over the years. "I really think it is a good thing. It is amazing what kind of things humans can do. Every evening we come. Many more should come and bring their kids so that they can be encouraged." Well, I would like to tell the Sridhar family, how encouraging it is as well, to have such good people like them come by, and say such nice things.
Posted by Utpal Marshall at 5:25 PM

PRADOYT IS ABSOLUTELY RIGHT: THE FACT THAT ALL THESE PEOPLE ARE TRANSCENDING THEMSELVES, AFFECTS THE WHOLE WORLD.

You make it possible with your blog
and a variety of pictures that far surpasses our hunger to be part of it next year.

..give due importance to your body, vital, mind, hart and soul to help the world reach its destined goal..