There is something, absolutely captivating about watching and listening to these 10 young women perform. From the very first strum of Bartika's electric guitar, or a call out of "1,2,3,4," by drummer Paree, the audience knows that they are in for a much different kind of musical performance. One, that is less about technical precision or virtuosity, and more about finding absolute joy and freedom, in creating music with a group of very close friends.

They call themselves the Jazz Girls, but to the people who crammed into the bracing aroma of the organically caffeinated, Panorama cafe last Saturday night, the group was more commonly referred to as, Bartika's Jazz group. She has been the leader of this diverse group of musicians that come from something like 5 different countries and 3 continents, since April of 2003. It was then, that the girls spiritual teacher Sri Chinmoy, suggested to Bartika that she start a Jazz group. 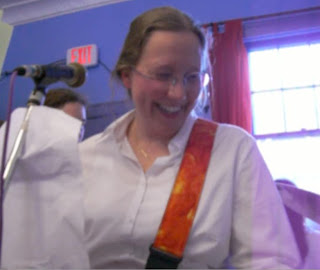 Before joining Sri Chinmoy's meditation group in 2000, she had led her own band in Germany. The boys she played with were her best friends and they enjoyed creating original music and touring around. As she admits, she was, "really attached," to the music and the life that went with it.
She admits though, that despite the fun and excitement of performing music, something inside her wanted deeper more meaningful inner experiences, and that was, she realized, the call of the spiritual life. What also became clear to her was the need to have a teacher who could guide her along the way.

Sri Chinmoy never asked her to give up her old life. At some point it became clear to her though, that her professional musical life, and her new life as a student of meditation, could not coexist together. Within 3 months, she sold her guitars and cd's, and to the best of her ability tried to live, what she thought was the spiritual life.

But still, there were these nagging doubts, and she would say to herself, "what's so wrong with electric music." 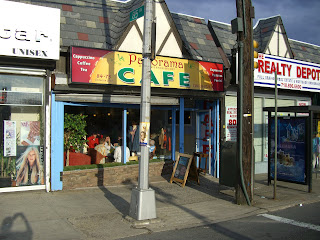 The music however, she quickly found herself involved with, after joining Sri Chinmoy's path, was singing his Bengali songs, along with a group of other talented young girl singers from all over the world. She had a good voice and a lot of musical experience so it was a good fit. The girls practiced a lot whenever they got together, which was several times a year, and also regularly performed.
Then, almost out of the blue, 5 years ago, Sri Chinmoy made a request to Bartika, that she 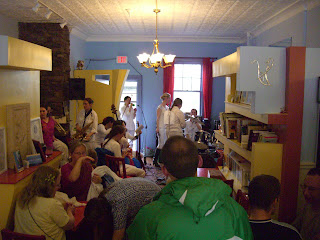 form a jazz band. He told her, "take me seriously, you used to be a vagabond." In fact, what she was requested to do, was find other like minded vagabonds in this young girls group and some how create a musical group out of girls with little or no instrumental experience. And there was something else, it was clear that the girls should not hold anything back when they performed for him. 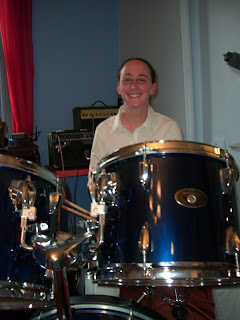 Paree is the drummer for this outfit. She frankly admits that when it comes to playing a drum kit, she is, "developing her skill from zero." I asked her if she ever, while playing this sometimes raucous music ever have a spiritual experience. She pondered this question only very briefly, "No, but I have had a lot of joy,"she says, smiling broadly.
Of course the experience of being on Sri Chinmoy's path has always been about self transcendence. Paree says, " I try to make progress in every field," and then with real emphasis she says, "and actually be a drummer."

Sudhira is the piano player for the group. At this performance she is buried at the back of the group because of the narrow performing area, and is a little hard to pick out, because the piano is against the back wall. She has her back to the audience and as well is cut off from view, by several other musicians. 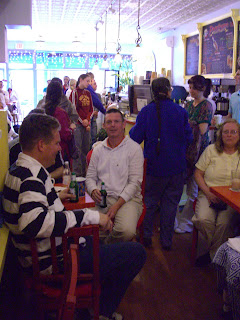 After the show I asked her about the experience of playing with the band. Unlike some of the others, she grew up playing piano, but was never much comfortable about performing in public. She says with this group however for the first time she is comfortable about playing. She says, "it is so free. You can just let go of your self consciousness." She finds the atmosphere so liberating, that she finds herself, "transcending my playing."
Sahana, the sax player, also had some musical background playing woodwind instruments. She also is clear that, "We haven't been trained as jazz musicians." Of the experience though she is adamant, "Its fantastic, Sri Chinmoy set it up. It's his creation, and he made us fearless." 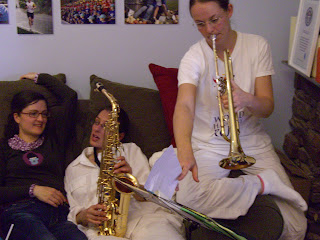 She describes the oneness that the girls share. That they are more than comfortable with their musical limitations and because of this, the audience is more than willingly to accept and embrace this openness and honesty. In so doing they are able to, not only come up with something musically unique and fresh, but at the same time, the girls find a freedom to conquer together, their insecurities and fears at the same time. 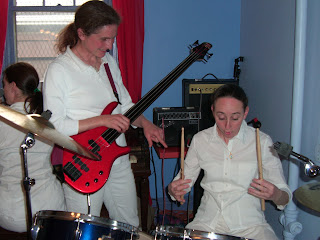 Bartika will tell me that Sri Chinmoy put few if any restrictions on the band. For the most part they perform mostly his music, though at this evening's show, they did an animated version of the classic American tune, New York New York. The lead singer for this song, an English girl named Dipika, did not seem bothered at all that she had to read the lyrics from a small piece of paper. Oddly this somehow gave a breath of fresh air to a song performed a little too seriously and a little stale by most who take it on.

Bartika will tell me how free and emphatic Sri Chinmoy was when it came to her using his songs . He told her, "use my music as your own." To her this was an amazing and generous opportunity. She tells me with such delight how his music is "universal." She also felt that this gift of his music was not just for her, but for anyone who was inspired to share it with the world.

I then ask her what Sri Chinmoy had ever said about their performances, which occurred regularly about twice a year. She tells me that he said to the group, "Unbelievable, I really enjoyed your music, it gave me such joy."

Posted by Utpal Marshall at 6:33 PM

what a blessed and wonderful group of musicians... Sri is smiling from beyond and I'm sure this will help spread his message of peace far and wide. I hope I get to work with you all someday...

Such a nice way to relate the Centre and our way. The best article I have read in 2008, and definitely in my top ten from the beginning. Thank you, and thank you to Bartika's Jazz group!

Very nice. Do somebody know if they are going to publish CD?
Viliam Kocinsky

Thanks guru Sri Chinmoy, for his music, for all that he has created and shared with the world! For the acceptance of life as it is, and for the synthesis of fragrance of spirituality with the beauty of life.