It's what you put in 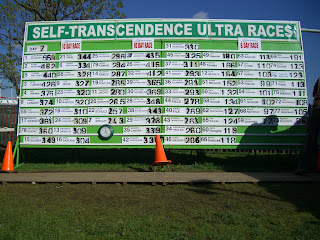 What a difference a day makes. At this same time yesterday, the conditions on the course where just about as bad as they could be. Today has dawned bright, clear, and fresh, and those same runners, who told me how, they just barely survived, through the heavy rains yesterday, are now in a kind of runners seventh heaven. 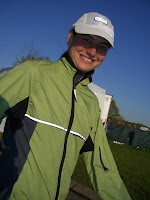 Alina Sikorsky tells me that she feels great. I am surprised when she tells me that this is her first multi day race. In fact the furthest, she has run in the past, is just the 26 mile marathon. At this point, in her 10 day adventure, she has run 210 miles. I am curious as to why and how, she has made such a dramatic leap in race lengths. She describes, how for the past 2 years she had helped in medical. She looks at me with 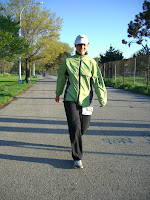 such sincerity, "I am not a good runner, its about inner strength, inner connection. The most important thing is that I am on the road." This road, that she walks so serenely now, of course, was not so long ago, fraught with many obstacles. She confesses, that in her normal day to day routine she is often bothered by stress and other worries. She tells me, how yesterday during the night while she was resting, her tent got flooded. In her current state of being she says, "I was not affected. Things come and go, and I am in a stat 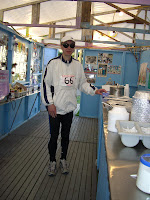 e of happiness, I am surrendered."

During the rains yesterday the kitchen was often a haven for those who wanted a hot drink, or walk for just a brief, while on firm dry ground.

Katsuhiro Tanaka is in second place in the men 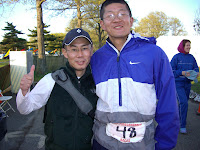 's 6 day. He was joined for the day by friend, Yoshi Nishimura. Yoshi tells me that Katsuhiro is a good runner. He gives me the thumbs up sign. Katsuhiro speaks very proudly of Yoshi, he tells me that he has run the Spartathlon in Greece 11 times. 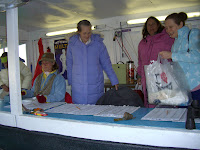 At 7, there is a shift change at the camp. One group of tired counters goes and another experienced group fills in the still warm chairs. The runners never get a shift change. Their chairs rarely get warm. 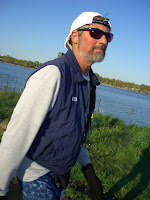 Frederick Reiner, from Salt Lake city is a very young looking 60 year old multi day runner. He has competed in 125 ultra events over the past 30 years, and this is the 5th time he has participated in the Self-Transcendence race. He speaks frankly about his race experiences here. He says, "I have learned more with the Sri Chinmoy marathon team, than all the other races combined." Fred's personal philosophy, is not about how fast you are, but how far you go. He comments, not jus 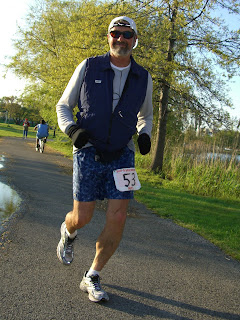 t how well organized this event is but how far people will go in order to help. He tells me that when he needed new shoes they were bought for him. He holds up a coffee and tells me that they even brought that for him. He feels, that in long distance running events, it is one of the few sports where people genuinely assist each other, in order to improve the others performance. He can not find enough superlatives to describe how much help and support, he has received here over the years. He also describes, how the race is like a microcosm of life itself. "It is the journey and not the destination." He also describes how important the family atmosphere is for him here. He recognizes so many people who not only run but also help. He describes that when a runner drops out, "there is an emptiness, when that person is not here. Its not about the numbers, its about the feelings." 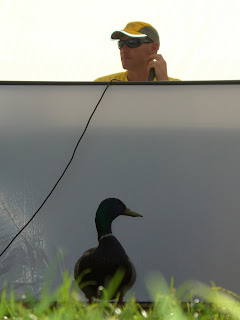 Has anyone seen the duck? 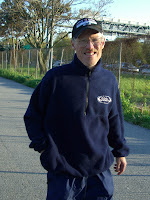 Don Allison is one of the truly important figures in distance running. Up until last July he was the owner and editor of Ultra Running magazine. He has been here supporting his friends and the race here for the last 5 years. We speak at length about his early distance running experiences. Starting sensibly enough, by running marathons in the 80's, and then at age 37 in 1992 of running a 50 miler in a time of 6 hours 15 minute, which he could never beat, no matter how hard he tried. He called it, "beginners luck." He is still remarkably fit and for the past 3 years has biked to this race from Boston. A distance of 285 miles, that was not helped yesterday by the torrential rains and the elusive bike lanes of the New York city bridges.

His first encounter with this race, he recalls, was a powerful experience. He was of course familiar with the Sri Chinmoy races, but had never been to one in person. A friend of 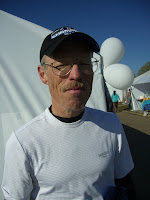 his, back in 2003, Danny Ripka, was entered in the race, and asked for him to come. His stipulation though, was that should he win, he would have to be on the cover of Don's magazine. He describes how he intended to come, for just a couple of days, and instead stayed for the week. He says with enthusiasm, "this was an entirely different event." He was taken aback at not just the organization, which he describes, "I saw everybody else amazed at everything here. It was surreal." Added to this, was the fact that his friend Danny, was in a battle to the finish, with women's champion, Dipali Cunningham. He tells me that with just a short time left in the race, Danny had a slim 10 mile lead over Dipali. He was so tired that, "Danny couldn't lift his head." But in a supreme act of transcendence he got back out on the course and, "ground out another 6 miles, to beat her by 2 miles."

Don speaks with passion, as he recalls this experience. For a writer who dreamt of the romantic aspects of competitive sport, what drives athletes, and the circumstances of their lives. This was a pivotal event. When he returned to Boston, he wrote the article, "w 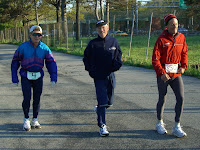 ith everything I had." He describes trying to put the reader in a place of actually experiencing the race fully, as if they were there in person. He calls that race, a spectacular act of perseverance.
He speaks now wistfully of the world of distance running. He points back to the green counting board, now swollen with numbers. "You can look at numbers all day long and you can't really appreciate it." He pauses in reflection, "What it takes just to run one mile." 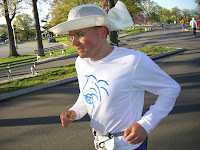 Pradeep Hoogakker, from the Netherlands is running the 10 day for the first time. In a day, now filled with so much lightness, his hat billows about his head like a flapping sail. He appears to be gliding smoothly around the course. When I ask him how he is, he describes himself as, "now I am fine, the last few days have been kind of tough." Besides the problem of dealing with the rain, he describes pain in both, his achilles and his shin. He describes to me that he has been, despite the discomfort on the outside, very peaceful and ca 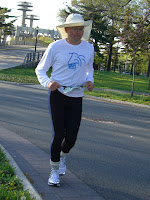 lm, within himself. He had run the 6 day last year for the first time and tells me he had gone through many transformative experiences. He relates, that despite some of his inner and outer challenges then, he realizes how much he gained from running the race. One day after it, Sri Chinmoy in fact gave him the spiritual name, Pradeep, which means, 'Climbing Aspiration Heart Lamp."

He tells me that in order to honor the memory of his teacher, he ran 76 miles his first day here. The age, 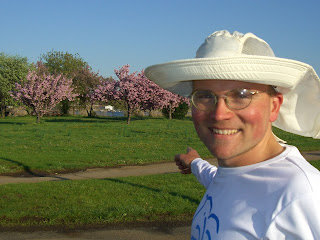 Sri Chinmoy was, when he passed, and the furtherest, first day mileage that he had ever accomplished ever before. He tells me with utmost sincerity, that, "Sri Chinmoy is still here."
We are running by some beautiful blossoming trees and he points to them with a smile spread across his face. He says, every lap I picture that he is there, there under the trees. This inspires me for every lap, for every mile, for every day of the race.
Posted by Utpal Marshall at 4:43 PM

There should be a warning for reading these reports: It can become addictive and make you want to run yourself next year!

Thank you Utpal for these amazing reports, it makes me want to run it myself. And a giant thanks to all the inspiring runners and helpers.