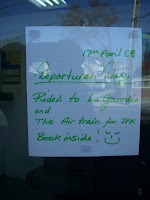 There was a hand printed sign, posted in a window on Parsons Blvd, today. It was a simple reminder to the visitors, who had come to New York, for April celebrations, from all over the world, that the great yearly event had finally come to an end. Hundreds had come for the 10 days of festivities. Some came a bit early, and some a bit late, but all were here for the most important day of all, April 13. This being the day that Sri Chinmoy had come to America from India in 1964.
Whether you were a new student, or whether you had been coming to New York for many years, it was the first time for all of us not to have Sri Chinmoy here amongst us.
Not to see his smile. Not to see him, ignoring the infernal pain that nagged his every step as he strode across his beloved tennis court. And not to see him radiating with supernal light and love, at every moment. We who basked in this glow and learned from his many books, and rejoiced at his paintings and poems, and music. And saw him lift ever increasing mountains of steel now had to understand, what this new world without him physically present, meant for us. How to cope with a chair now empty and yet still feel our hearts so richly full nonetheless. 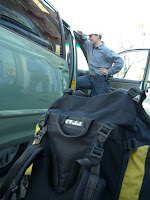 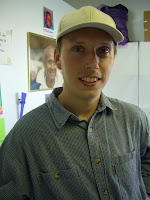 Blazej is going back to Brno in the Czech Republic today. He was one of the fortunate visitors who had been able to visit NY in October when Sri Chinmoy passed. He said that visit, "was a connecting link, it was incredible coming." He felt that coming here then was a haven for him.
This April visit, is now the next step. He feels it was a chance to reconnect with Sri Chinmoy. Seeing his fellow students and spending time with old friends is inspiring, and bringing forward his good qualities. He says that from this visit he relates to seeing, "Sri Chinmoy in other students and the other students helping me see Sri Chinmoy in myself." 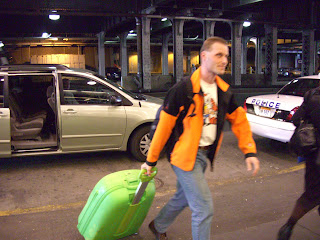 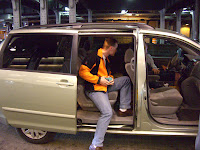 Tusheet has come here from Heidelberg Germany. He tells me how he entered the 12 hour walk and he was very pleased to be able to complete 47 miles in that time. I ask him what about the walk was special. He said, "Sri Chinmoy was doing it in and through me. I was just watching my body go on and on. So much joy."

Grahak Cunningham just may be the first and last friendly face visitors to April Celebrations see here in New York city. He spends much of today picking up people who come to the block and need to make it out to the airport. By this time in the afternoon he has already made 7 or 8 trips to the Jamaica air train station. He also has picked up many of these same people who arrived here a little over a week ago.


The Magee brothers, Colm and Shane are flying back to Ireland. They are exuberant and full of energy. Younger brother Colm describes his visit as, "inwardly, go, go, go and outwardly, go, go, go." He says there was always something to do.
Shane isn't sure how many times he has come to New York. He thinks it is 7 or 8 visits, but doesn't know for sure. He tells me, "When I see the blue shops on Parsons, I know I have arrived. 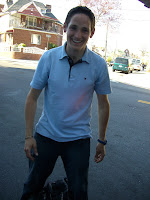 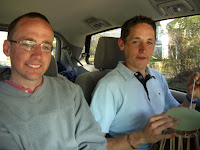 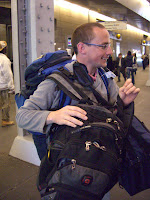 " He too was able to come in October. What he liked about this trip was being able to feel Sri Chinmoy's presence. For him, "he is more tangible than ever, I feel the inner relationship." He says that despite that Sri Chinmoy no longer being able to direct things, "Everybody knows what to do."
He says that by most conventions, western people are slow to move forward or make any progress at all. There is hesitation in practically everything, because of insecurity and fear. He says, Sri Chinmoy taught us, "to have no fear, and just do things." He describes how we so often limit ourselves by saying we can't do things. Sri Chinmoy was always about self transcendence and never giving up.
He describes life in the group while Sri Chinmoy was physically present as, "we were so busy just trying to keep up with him." He says now he has discovered that what he and his fellow students need to do now, "is unpack the huge manifestation box that he left." From this we need to continue to inspire the world, because his inner presence is still very much here. "We have all been trained, now we have to do the job."

Snatak and Ganagane are going back to Reykjavik. Snatak says that he honestly did not know what to expect on this visit. He says that he was pleased to experience Sri Chinmoy very powerfully. He echoes a sentiment that I have heard a lot in the past few weeks, "There is so much to do." 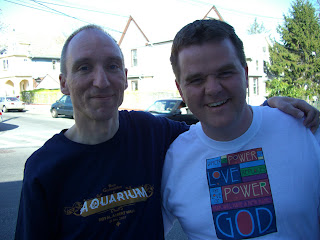 Ganagane told me, "I feel like I am taking part in something spectacular. I am beginning to realize what all this is," making a sweeping gesture with his hands to indicate the world around us. He feels that those who had and still have a chance to learn from Sri Chinmoy are in part responsible for the transformation of the world. To help create and instill oneness. "There is much left to be done." 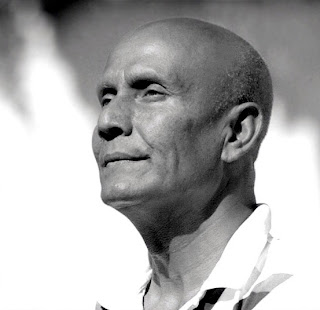 I do not give up,
I never give up,
For there is nothing
In this entire world
That is irrevocably unchangeable.

Nice work utpal, a fantastic summary of NY celebrations and the people that travel to experience the essence of spirituality. I especially like the photo of myself.