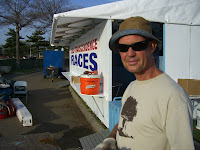 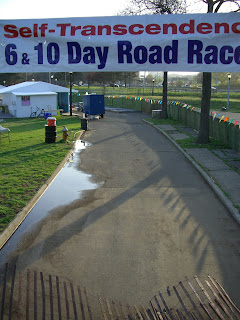 Welcome to Self-Transcendenceville USA. Right now it has a population of one guy, and the motor of his van is running, so he will be leaving soon.

Bipin has spent the better part of the last 4 days overseeing this little village coming together. His crew has left for the day and he is tidying up before coming back tomorrow for one last push, before the race starts the following day, Wednesday at 12 noon. 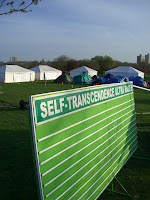 He tells me that everything is on schedule and he is grateful for the support and help he has received from his large crew. He says, "it has been e 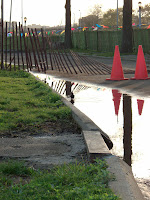 asy."
Behind him, are quite a few tents, already setup. He thinks that about 10 have been erected and there will be about 8 more, to join them. Also some runners, have put their things in the mens and womens dormitories, at the back of the village. He thinks there will be 78 runners in total, entered in the 2 races. 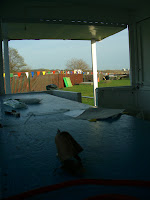 As he looks out across all the many structures I can see that he is very proud of what the crew and he have accomplished. He tells me that, "this place vibrates with work." I mention that there were potentially labor saving, prefabricated ways of putting it altogether, and he laughs with amusement. He holds up his hand for me, to demonstrate physical labor. He tells me that he faced many jobs in the past that could have been accomplished with less back breaking effort. 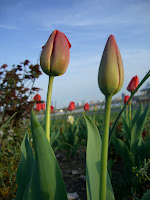 Somehow he feels as though, the hard work, is a necessary and 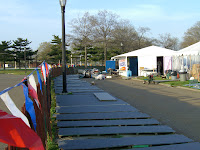 integral part of his life. It is not to be avoided, but rather to be accepted and embraced.
He says, "there has always been a self giving capacity to getting involved in this." Then he points to all the buildings around us. He says, that he feels the efforts of himself, and the crew allow them, " to better to get involved and better in touch with the runners." He feels that all this selfless service, done so willingly and joyfully is, "Heart translated into effort." Further he says, "the runners see it and appreciate it." 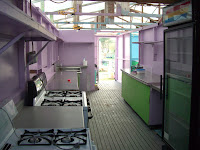 When I ask what will be the next big addition to the village now mostly assembled, he tells me that Sushovita will be coming tomorrow and setting up the kitchen. 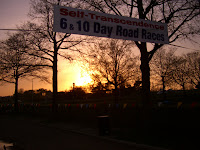 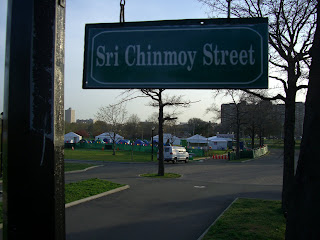 And if there is any question, as to how unique and special this little community in waiting is, one has only to look up to a nearby pole, and see there the Sri Chinmoy street sign. There are in fact 2 of them. The other, is on another pole, a little ways further down the road. This street was inaugurated just 2 years earlier in October of 2006. 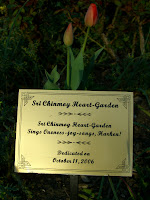 As I walk back to my car, I notice a glint from a plaque in a bed of fresh spring flowers. I go over to look more closely.
It is the same one Sri Chinmoy himself put there at this small garden, less than 2 years ago. I remember back, to the many times over the years, during other races, when he came to this sacred place, to encourage the runners. I think to myself, he will be here on Wednesday when the race starts, he will always be here.
Posted by Utpal Marshall at 6:23 PM

It is amazing. I am already
a little bit jealous that
I am not among those runners who can get a new life-experience. But I am proud that Visudhi, the wife of Mandu, she will be a starter.

I am speechless about this sign with the date Oct.11, 2006. If you push
on the picture it becomes very big. I think the locals will become all heros.

What is wrong with me?
Do I live on an other planet, Mars for example?
Guru would say: "next year"