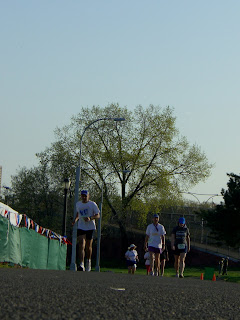 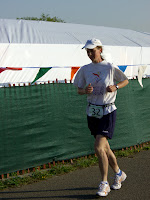 For just about everybody, who lives in the New York city area, today was a picture perfect spring day. For 49 10 day runners in Flushing Meadow, where the temperature popped up, to about 80, it was something quite different. I did not hear the word scorcher, but one runner from eastern Europe said it, as best that could be said, it was "all day Sun." 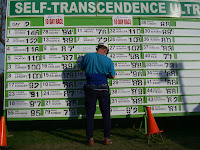 Ivana has taken a slim lead for the girls. Madhupran, who said he was not running for the miles, but for joy, must have been very happy to complete 126 miles in 24 hours, and take quite a commanding lead in the race, that he is not quite racing in. 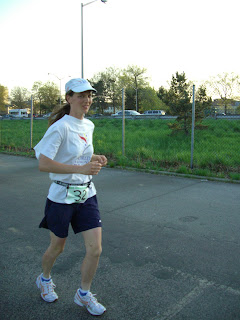 Ivana moves as lightly on her feet as if she w 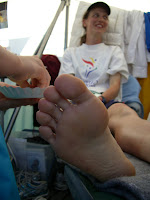 ere a slender deer. She speaks so softly I can barely hear her. I note that her mileage and the sense of calm and peace about her bespeaks much more. She tells me that she has been running for 6 years now. She feels that running and meditating are the 2 great beacons in her life. By racing here she feels that she is, "receiving an opportunity to make progress." This is her third time competing here in NY. 3 years ago she ran 265 miles in the 6 day race, and 2 years ago she ran 507 in the 10 day race. She seems totally unconcerned about the competitive aspect of the race, or that Lenka from the Czech republic is not far behind. She says, "No matter how many miles, I will be happy." I ask why she took up this toughest of all sports, and she replies simply, "I am supposed to do this. This is the most happy period of my life." 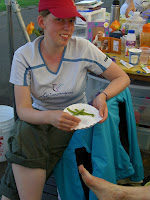 Klara is Ivana's helper for this race. Right now she is helping massage some unusual concoction onto Ivana's legs. It involves herbs and oils, and I don't think to ask what they are, because whatever it is, it obviously must be working. Klara tells me that this is the second time she has helped Ivana. She admits that Ivana requires very little help, she says that she is, "very focused." I ask why she has come here, such a long way, to help. She smiles, "because she is my friend." 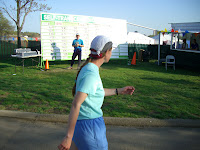 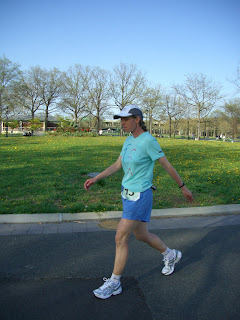 When I first see Ivana, she is running with Tirtha from Germany. She tells me that Ivana was, "born with running shoes on." She says that she is so successful because she is able to maintain her form and style.
Frankly I am surprised to see Tirtha here, as I had never seen her compete in anything this long. She tells me that when ever she was in NY during the 3100 mile race, she would often go to the course, and watch the runners. She tells me that at the sight of the runners there, "I would be in tears." She says her name means Pilgrimage, and that the sight, of the long distance runners invoked am inspiring sense of awe and purpose in her. I recall to her, that for years her mother, who is now 61, has been a fixture at the yearly 12 hour walk. Even this year she came in 3rd. Tirtha describes of herself, a very gradual transformation of sorts. That beginning in 2007 everything in her life started flowing very smoothly. She recounts that Sri Chinmoy had encouraged her to try and run a 3:30 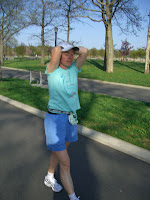 marathon. She has run the marathon 20 times and has yet to make that time. Then in 2007 she attempted a 6 hour race, then a 12, and then a 24 hour race. This last race she accomplished in early October. I am surprised, I tell her, that she did not take a step up to 6 days, and instead opted for 10. She says that she felt that there would be more pressure in running 6 days than in 10. In the end, it just felt like the right decision to make. She says, "It feels right to be here." She tells me of the joy she feels in still experiencing Sri Chinmoy's presence here. She is all gratitude. 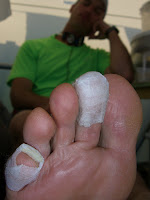 It is early evening by the time I get to the race. Dinner is pending and the heat and brightness of the sun has taken its toll. Coolness of the evening is starting to slip slowly in. Madhupran has now disappeared from the course, at least for now. Mario here, is sitting at his table in the dugout. He is having some problems with his quadriceps and wondering how he can get the pain there, to go away.
It is still very early for the medical tent to start up into high gear. These are very experienced runners, at least most are. 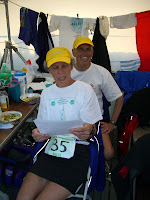 The mail has arrived, just a short while ago. The Landry family from Montreal are here for the 2nd time and are taking a short break. They tell me they are reading a letter from their daughter. She has promised her parents that she will run every day for the next 10 to honor her folks. They are very pleased by this, I suspect that their daughter is also very very proud of her parents.

Glenn Turner from Louisville Kentucky is back again at the race for the third time. He has run over 100 ultras and last year here he came in second with 654 miles. He says he is, "taking it easy this year." He describe in the past that he has gone out too fast.

More interesting is that between 3 and 4 weeks ago he ran 2730 to run across America in the fastest time ever. What makes it even more remarkable is that he was pushing a small custom built cart, and that he had no help whatsoever. His time was 37 days, 1 hour, and 8 minutes. He managed to average 71 miles a day. He says that because he would sometimes coast on the cart it was not 100% running. He describes it as a brand new sport. He describes what a thrill for him it was to do this. He tells me that, "America is a great place, everyday someone offered to help with som 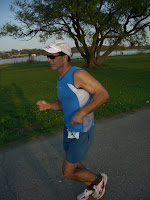 ething." He felt he was, "following a dream."
I ask him what brought him to the Self-Transcendence race. He says, "There is an energy of love that puts it on." He describes it as being in everything from the food, to the counters, to in fact all the surroundings. For him when the race gets tough than this love becomes even more real.
He tells me that in his running he is, "trying to find the connection that connects us all. I want to see if I can do it in a competitive situation. Let the race come to me and be receptive." 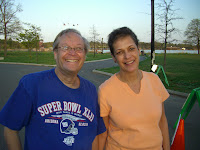 I came upon the Papena family going for a little stroll around the park on this warm and pleasant evening. They were very pleased and surprised to come across this race. They told me that they live near the course of the 3100 mile race and are very familiar with our races. Mrs. Papena said that as soon as she sees that the 3100 mile race has started she is always inspired to get on her treadmill. They tell me how much they are inspired by the "groupness," and the atmosphere that permeates the race course and the surrounding env 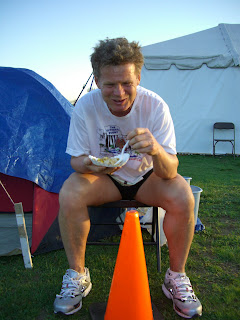 I catch up with Bob Oberkher from Northvale New Jersey who is currently in 3rd place. He describes for me that the day was a little warm for him but he is pleased with his performance thus far. 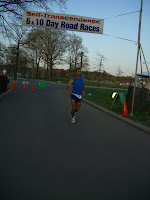 Then, just as I am getting ready to leave I catch sight of one of those moments, you just don't want to miss. Rastia was flying down the road to complete his first 100 miles.
We all hope there will be many more miles to come but getting that first 100 under your belt always feels like you are really here, and that you mean business. 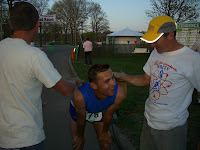 Rastia of course had been on the crew that set up this village. Now he is getting a chance to really try it out. Hayden and Aaron from New Zealand who worked with Rastia are really pleased for him as well.
Posted by Utpal Marshall at 6:23 PM

Wow Utpal, I just clicked on the very last picture,
and could not get over -
a real shot into the eye.
With this picture I felt I was there, right at the spot. I do not know him, but I felt as I was one of those spectators, standing there with the others and congratulating him for the first 100 miles.