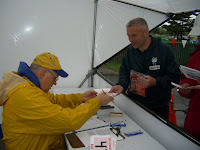 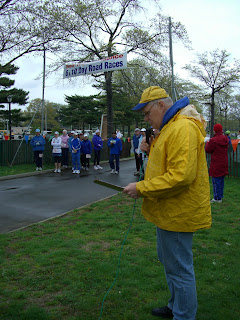 It is a brand new day at the Self-Transcendences races today. The new kids, the 6 day runners, have shown up, with all the enthusiasm and nerves, that the 10 day runners had, when they first started, 4 days 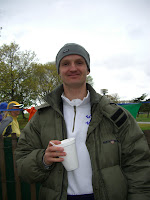 I come across one of the race favorites, Asprihanal Aalto and am surprised to see him not dressed and ready to run. He tells me that a nagging cold has been bothering him for the past 10 days, and he has decided not to run. I ask if he is disappointed, and he says, "yes a 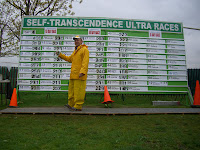 nd no." He says he does not like to compete unless he can give 100%. He wanted to use this event as a training run for the 3100 mile race, which will start in 7 weeks. He tells me that the 3100, which he has run 7 times, is the most important thing for him to do. He says happily nonetheless, "today I will be a counter." 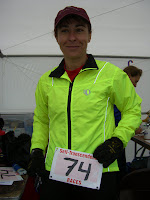 Barbara Sorrell, from Albany, really is a new kid on the multi day race seen even though she has been running for 22 years and run 50 ultras. She tells me that she heard about this race a few years ago and read many stories about it in Ultra running magazine. She says, "those stories made it real." She tells me that in order to have the time, to come here, she had to, "burn 5 days of vacation time." She is nervous about how tough it will be, and suggests that maybe she should have called the time off, "sick time." Her goal, and she smiles hesitantly about this, is to run 80 miles her first day. The last day of the race is her birthday, and I tell her I hope she completes a lot of miles to make it special. 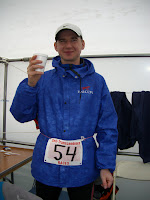 Pavel Szymanski from the Czech Republic is back for the second time to this race. He ran 242 miles last year and hopes to better both his distance this year, and his inner experience. He tells me that here there is a good atmosphere here, that it is conducive to fighting the ego and other of life's challenges. He tells me that, "Many people are transcending themselves here." 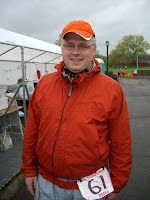 Amiya Smerda has run here once before in 2006. He describes, that for him during the race, "everything gets much simpler. All things and problems of regular life disappear. All our worries and so on, are not important. The only thing to do is get up and do the miles." 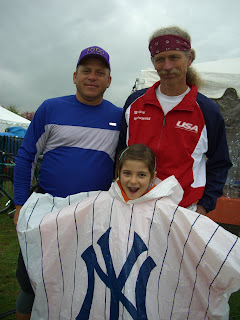 Gary Cross, on the left is from Arizona and John Geesler on the right, is from NY state, and of course the other person in the photo is the Queen of the camp, Alika. Who apparently is a NY Yankees fan, just within site of near by Shea stadium no less. Gary has completed many multi days and is also the race director for his own 6 day event in Arizona. He tells me that he serves with the US Air force, and had to drop out after 5 days last year, because he was called back off of leave. He tells me that he ran 272 miles last year and has, "come back to finish it." 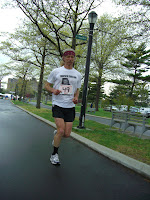 John is extremely experienced in ultra distance running. He has been on the US 24 hour team numerous times and for the first time in a long while he has yet to make the team. Last year he came in third here with 412 miles but says, "I did not do a good enough job, I wanted to come back and do it right." Also if he completes 138 miles in his first day he may be assured of a chance on the 24 hour team. He tells me that another 24 race was an option but he decided upon coming here, "I want to do 6 day, I want it all, this is the place to do it." 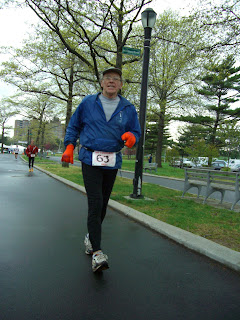 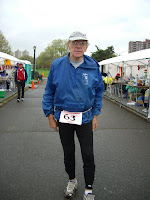 I meet Sam Soccoli and cannot believe that this Long Island native is 76 years old. Since turning 70, he has run 44 ultras. He tells me that the multi day bug caught hold of him when he ran a 7 day race in Greece in 2006. He said he has heard many good things about this race. He looks at me very enthusiastically and says, "I want to break my age group record for 48 hours," which is 143 miles. I ask, if he completes 6 days, will there be a record for that. He pauses, and tells me, that he very well may be the first man, in his age group, to run such a distance. 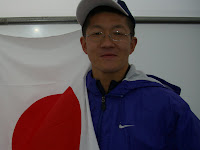 When I ask Katsuhiro Tanaka of Japan if I can 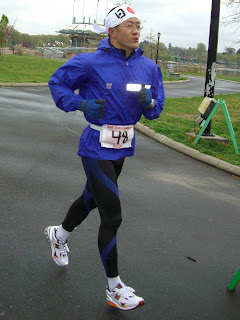 take his picture, he steps back and drapes the Japanese flag across his shoulder. He has run on the Japanese 24 hour team and has tremendous experience in multi day races. This will be the third time he has run a 6 day race. He chose the race here this year because he had been following the event here, for almost 10 years. He smiles when I ask him what he thinks of the atmosphere here, compared to other events he has run. He says, "I think good." 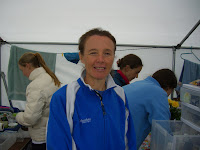 I come at last to Dipali Cunningham from Australia and ask her how is she. She looks relaxed and at ease, and tells me, "I am very blessed, and very joyful." She describes a new feeling that she is experiencing, "Some spirit is taking over me."For someone, who is one of the world's best ultra distance athletes, going back 16 years to 1992, and has run 29 ultra distance races. Who has set many world, and age group records, I am surprised at this answer. She describes for me, that usually at this time before a race she is apprehensive. She tells me frankly, that she feels that her late spiritual teacher, Sri Chinmoy is still here and is inspiring her from wi 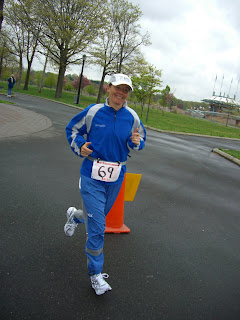 thin. She also mentions her gratitude, that despite his recent passing, that this event is continuing at the very high standard that has been maintained here over the years. She says that despite his absence she feels, "extremely joyful at stepping into new territory." She tells me that she has had many incredible experiences here, over the many years of competition.
She relates to me one story, how some years back, when her helpers were concerned about a possible injury that she had, and that she might not complete a race. Sri Chinmoy told them, they had no reason to be concerned about Dipali, that she, "runs with her soul."

She describe this sense of spirit within her now, as the key to making the most, and enjoy the most, the 6 day race. Of her late teacher she says, "He is present in me." She concludes, before heading off to the starting line, "My soul longs for the next race and self transcendence." 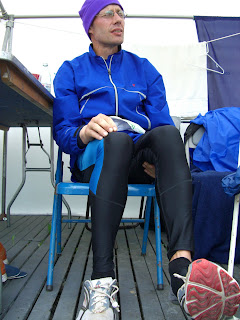 And, just in case you were wondering about this gentleman, just before noon today. Before the start of the 6 day race Madhupran Schwerk completed 400 miles over a 4 day period. If he doesn't look quite as fresh, as those, new kids 6 day kids, who have just arrived with clean clothes and fresh new shoes, who can blame him. He continues to run and to run hard every day.

I am so glad that Madhupran is back and completed already 400 miles in 4 days. He is the breath
of all the participants, the leader. The picture talks for itself.


Give due importance to your body, vital, mind, heart and soul to help the world reach its destined goal.


from: There was an Orphan Boy