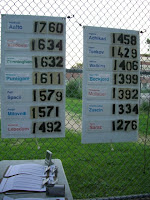 Thursday, day 26, dawned bright, on this little paradise, that is the 3100 mile race. Yesterday, Asprihanal found another gear, and ran 72 miles plus. Smarana, Petr, and Pranjal crossed over to the half way club. Stutisheel should be joining them later today. 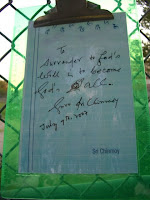 To
Surrender to God's
Will is to become
God's all. 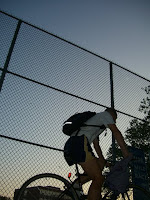 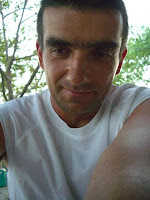 Pranjal is always the first to arrive. Yesterday he ran over the half way mark and added 20 miles on top of that for good measure. When asked his view on his achievement, he jokes, "the hard part starts now."
Diganta is one of the last to arrive. He seems to hop off his bike and make his way straight to the starting line. He will likely be half way, by Friday night. 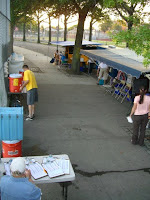 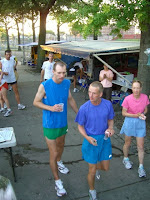 The time, before the race starts in the morning evaporates like steam from a tea pot. Elmar is counting down the minutes. His voice is soft and gentle amidst the symphony of sounds, that include fine instruments, that's music consists of shuffling, rubbing, wiping, and slurping. In and through this all, a cd of esraj music fills a level, that lightly touches the ears, but somehow always finds a grateful audience in the heart. 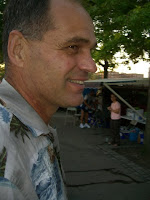 The master of ceremonies always cheery, sends the runners off for another day. Diganta hands him a bag of dirty laundry as he passes by. Rupantar's reaction, "Every day I get presents." Diganta's response, "Yes, but this present you have to give back." 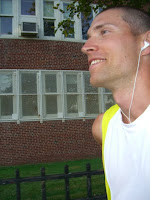 I start the day running with Diganta, who has plugged himself into an ipod, first thing. Out of curiosity, I ask him what he is listening to. He tells me that he is listening to a talking book. It is the last for him, of the Harry Potter books. Since he has been listening to them out of order it is his 7th book but not the 7th in the series. 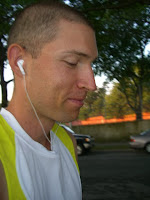 that listening to them for him, is a great distraction for his mind. When he is listening, he says, "You don't worry about running." He says that during the incredible challenge of this race, " the mind starts revolting." And given its chance, the mind will 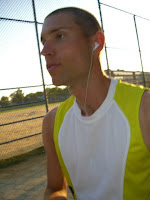 inevitably press the question, "Why are you doing this?" As he examines these kinds of doubts and mental questions he says, " you concentrate on them and your problems become worse."

He says, he is somewhat limited, in that his ipod is an older one, and will play for only 2 hours. Nevertheless, after he has spent time listening about the adventures of the kids of Hogwarts, his mind is quiet. He says it is, "like a meditation."

I tell him that I had briefly dipped into the books myself but lost enthusiasm to go the distance. I ask him what is the secret about the last book. He smiles as he asks if I really want to know. I said yes, please tell me. His grin just increases as he says, "Death is not the end." It is cryptic and at the same time strikes me as profound. I of course do not know the circumstances of the plot, but in the 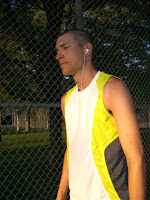 rather real world of the 3100, it signals a strong message of detachment and surrender, to the deep spiritual realm, that inspires and drives this very event itself.

We discuss the similarity in the ideas of the fictional world of JK Rowling and the very real world, that all who are running the 3100, have to experience every day. He says the books, "opens my eyes to the magic which is here." 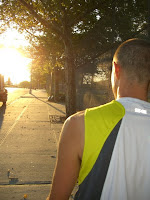 says, "we have fear of the unknown." This also relates to the capacity within each of us. That each runner knows they can not only succeed in running the distance but also find self transcendence in the journey as well. It is only when they fully give of themselves, that they are truly able to become true instruments of the higher force within themselves. It seems ironic that we are having this conversation, as that Sri Chinmoy's poem on the fence this morning, covers this idea with simplicity and beauty in just a few lines.

He seems content and happy in this his 26th day. He has come back after a one year absence. He does not see the goal ahead just yet, but is confident that he will arrive. As he runs away, he says, "you just go on." Written by the best author around, his own heart.

Ananda Lahari runs by and I drop in beside him. His mileage the last coup 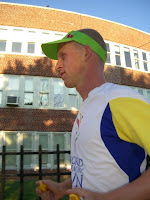 le of days has been below 50 and I ask him whether or not his shin splints have come back. He says no, but that he got carried away after his problem was relieved and ran too hard. Both, 3 and 4 days ago, he ran nearly 60 miles. He says, "I was running too fast, and my legs fell apart."

He tells me that he wants to correct something he had told me the last time we had talked. He said that last year he had got inspired to run some very fast laps, because he had said, "he felt a oneness with the universe." He says, that after he said that, he felt it sounded a little, as though he was claiming God Realization. 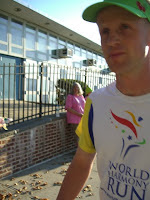 I tell him that it did not sound like that to me at all. I say to him, that there are no words adequate enough to describe anything about what is happening here. That in fact, it is impossible for anyone, other than the runners themselves, to have even a glimmer of understanding about what the run is all about.

We touch on the subject of surrender, which is so often the most important quality that the runners need to invoke. He says that for him it is one of the most important things. He also focuses on staying happy, which is something the other runners so often say about him. He is also becoming more aware of the necessity of patience and also simply going within to find the answers to all things. 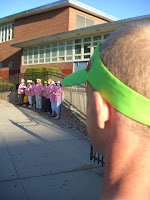 Parvati's group have now all arrived and are singing. Our conversation stops as we approach, and only after we no longer can hear them do we resume chatting. He says that he really loves to hear them in the mornings. 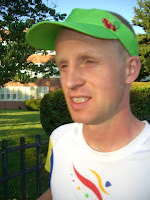 He then relates to me a recent conversation he had with Abichal, on the subject of progress. He had asked him, what one needed to do to make progress. He said Abichal's answer was succinct, and to the point, "Progress, is that we are here, and going forward." He turns and smiles with joy as he says this. In a minute he disappears around a corner by the basketball courts. Both going forward, in our very different directions.
Posted by Utpal Marshall at 5:53 PM