Give More to Get More 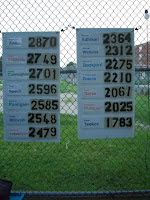 Arriving at the race this morning I have a case, of what I can only best des 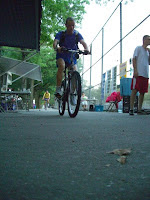 cribe as, number shock. (similar to sticker shock...seeing high price tags). Asprihanal, the man arriving here on his bicycle, has run the most miles in one day, since his first day on the 3100 mile course, 41 days ago. He ran just short of 77 miles on Friday. What makes this even more phenomenal is that it is almost 5 miles more per day, than he has run on any days since June 15th, a very long time ago. 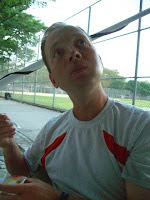 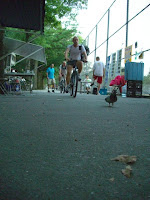 Stutisheel who described himself, as a 'dead Daddy', just yesterday, has also made a great recovery. He ran 26 miles more yesterday than the previous day.
Grahak, who is being escorted by a pigeon to the bike rack, ran 71 miles yesterday. This is also his best mileage since the first day of the race. 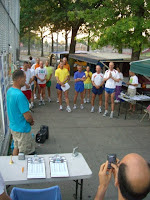 "The seeker has to travel a long and arduous road, but when
his inner being is inundated with indomitable courage, his
journey’s goal does not remain a far cry. His very courage
expedites his journey."

From a talk entitled "The Seeker" by Sri Chinmoy given at Long Island University; Brooklyn, New York, USA - 18 April 1978, found in The Oneness of the Eastern Heart and the Western Mind- Part 3. (Quote suggested by Archee) 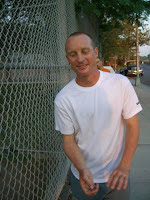 I am running with Grahak first this morning. When I ask him about his awesome mileage yesterday, he says, "last night was my best ever." He is now less than 400 miles away from his goal, and my sense, is that there is a new enthusiasm, for many of the runners, that they can at last see and relate to the physical completion of their great journeys here. 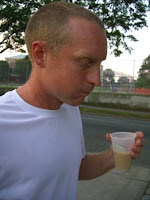 a lighter moment, as I ask him to recite, one of his poems. This is amusing for him, because a few days ago, a local New York paper quoted him as saying that he made up poems while he was running and then wrote them down at night. It turns out the reporter mistook him, for Pavol, who actually does this. Of course the other runners used this bit of mistaken reportage to have a little fun, at his expense. He responded by writing several compositions which he politely describes, that most of them, are unprintable. However, he kindly offered me one, about the actual poet in the news story.

There was a boy named Pavol
running around the track
he was an awesome runner
but has a hairy back. 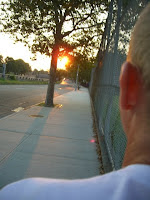 He does not take for granted a moment, about finishing the race, in record time for him. Of the race last year he says, "2nd last day was the hardest last year." He also puts in perspective for me, some of the feelings of doubt, that probably all the runners have had to face up to, one time or another. He says, "There were days I wanted to go home, and yet I still did the miles."

I ask him about the skin rash on his lip, and he tells me that it is just something that happens to him during the race. Normally he is not affected by such problems. If all goes well, he will finish in just over 5 days more. 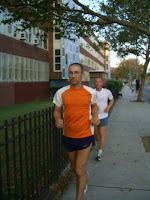 Pranab also ran more than 70 miles yesterday. Something he has been doing now for the past 5 days. He starts the day with just 350 miles to go, and within site of a new record time for himself. Baring any unforeseen problems he will almost undoubtedly be the second finisher. 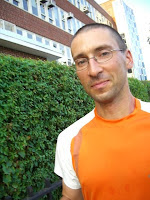 He tells me today, that he does not look at himself as a born runner. He does not think that his body type is best, for this kind of long distance race. He mentions another runner in the race, who he feels is ideal for this sport, but mysteriously is not doing well.

He says, that after his first race here, where his daily mileage went up and down, he decided to stick to being consistent. That wild fluctuations in mileage, from 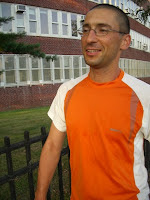 day to day, where not successful. He is also clear, when he describes how the mind, can be the biggest obstacle in the race for the runners. That they will allow doubts to interfere with their true capacity. They will also imagine all kinds of maladies that don't exist. He subscribes, it seems, to a philosophy that is a balance between mental toughness, and also, playing close attention to what the body is really experiencing.

He says simply of his approach, "Do the thing you should do. Be honest with yourself and just keep running." 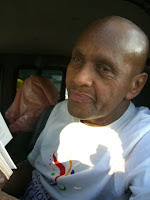 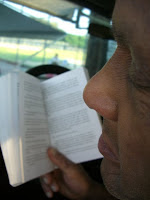 Vajra taking a break, by reading a little of Sri Aurobindo, in one of the vans. 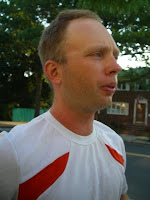 Today Stutisheel is looking like his old self. He is happy and energetic, and ran 65 miles yesterday, which was a good day for him. He says, "I feel tremendous." He describes for me in some detail that he believes it was his liver that was causing his energy problems. Something to do with digesting fats and a liver that was not functioning well.

The problem was such, that he had no energy 2 days ago, and could not even run 40 miles. This also meant, that because of this, breaking his record on the course, was slipping dangerously out of reach. It seems that drinking some 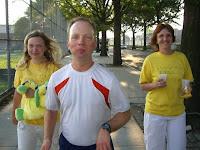 special coconut drink helped him almost entirely with the condition. Because he had such a great day yesterday, he says, "My hopes blossomed again, to finish the race in under 50 days."

He is moving quickly this morning, showing his strength and speed once again. He says, "I have an inner cry, an inner prayer to Guru. I want to run fast."

Stutisheel's team will be missing one member, as of this afternoon. His wife Atandra has to return home to the Ukraine, but his daughter, Alakananda will stay to help her Dad. 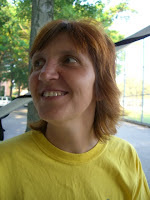 She smiles as she says of the race, "It is not the end, only for me." She has enjoyed her experience here in New York, but clearly misses not having the daily appearances of Sri Chinmoy, who came so often to the race. She says that Stutisheel just has to close his eyes to see him, but for her she says, "I have to concentrate."

Here, she says, "Everything happens so fast. There is something new every day." 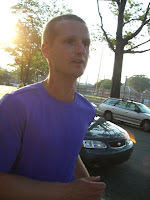 is clearly uplifted by his good day here yesterday. Running nearly 79 miles means he has only 230 more to go. I ask him if he is surprised at the fact that his mileage went up so dramatically. He is not. He has had better races and also has had better average mileage days. He tells me that 3 years ago he averaged 74.6 miles for 21 days. The interesting thing about this, is that last year, he ran on average 71.28 miles, which was more consistent, and finished with a better time. 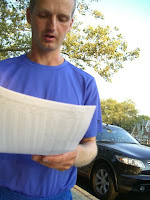 As we are running, he is trying to work out what his average mileage will be this year. Fortunately, it is not difficult math, and with my pen, and his race sheet we do the numbers together. He tells me, that he is determined to not average, anything less than 70. Sure enough, after dividing his new total by the number of days, he is averaging exactly 70 miles a day. He says, "I did not want to finish with 69."

It seems clear that when you are alone, far out 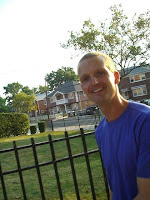 in front of everyone else, the inspiration to do better, can be elusive. He mentions how, in 2006, the presence of the world record holder Madhupran, was a powerful inspiration. He is not clear exactly, what made him run so far yesterday. He says though, "that Guru makes things happen."

What it is, that has lit the fire under him, we do not know for sure. He says, "Something has to inspire you to go to the total limit. Then, you have to give more, to get more." 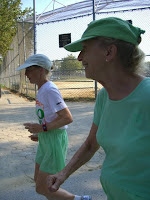 Sulochana is 78 years old and comes to run the 2 mile race most Saturdays. Suprabha stays at her house when she visits New York. This morning she has brought her a flower and runs briefly with her. As they both realize they are wearing identical outfits, Suprabha says, "we must be twins."
When she was 58, Sulochana ran in and completed the 700 mile race.

" A seeker is he who constantly tries to keep the body-consciousness inside the soul's divine reality; for the soul is inundated all the time with inspiration, aspiration and realization, and the seeker knows that this is what he needs. When the seeker's human reality enters into the soul's divinity and lives there for some time, it achieves divine qualities and divine capacities in abundant measure. The world of frustration and failure it leaves far behind. Only in the world of success and progress, the world of ever-transcending beauty and perfection does it live. And eventually it grows into Infinity's Love, Eternity's Bliss and Immortality's life."

From a talk entitled "The Seeker" by Sri Chinmoy given at Long Island University; Brooklyn, New York, USA - 18 April 1978, found in The Oneness of the Eastern Heart and the Western Mind- Part 3.
Posted by Utpal Marshall at 2:22 PM

Everything else is a barren desert, only Utpal's blog is real life. Archee's suggestion for the text is also real life. Christopher is now over with practcse, finish with practice now start, start, start with running!

Adding pieces of Guru's talk, The Seeker, is genius - soulful and totally inspiring.

Runners, wishing you miles of running in your "Soul's Divinity".


great forum lots of lovely people just what i need


hopefully this is just what im looking for looks like i have a lot to read.

It is my first time here. I just wanted to say hi!