All the Intensity you need for God Realization 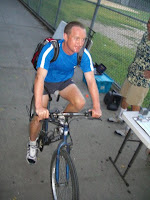 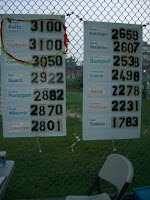 This day belongs to Grahak. The score board still bears the streamer, that marked the finish of Pranab yesterday, and Asprihanal, the day before that. Grahak will start the day with just 50 miles to go. This is a distance that will take him less than 12 hours to do. Like all of the runners here, who have given so much of themselves on this battlefield of life, he is the quiet embodiment of self-transcendence. This Australian champion has never craved the limelight, and never asked more from others than he was willing to give himself. He is one, who has pushed his physical being to perhaps the apex of its natural limits and then some. He has endured pain beyond measure, wrestled with doubt, avoided fear altogether, and in the course of his long journey, been grateful for every step, every experience, and every chance to please his Master in his own way. 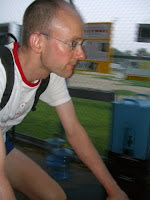 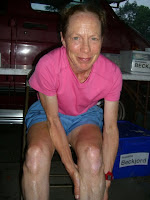 Christopher arrives with his hopes and courage intact. He has run 2231 miles. Like the hero that he is, he still tries and tries his very best, each and every day.
Suprabha says, "seems like a ghost town here." The absence of the 2 finishers at the start this morning is striking. This, combined with the fact that the days are drawing noticeably shorter does make it feel that the 3100 family is missing something. A something, that cannot be replaced, only fixed by joining those who have already crossed the finish line as well. 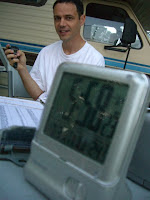 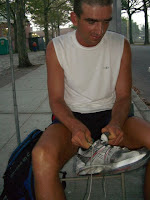 Pranjal has an empty chair beside him this morning. He ran 65 miles yesterday his most since his first day. With just 230 miles to go the finish must seem painfully close at hand. 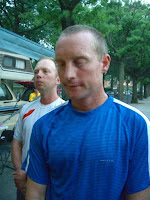 Triumphs of the soul

From the start to the finish.

Excerpt from A Fourteen Hour Peace Concert by Sri Chinmoy. 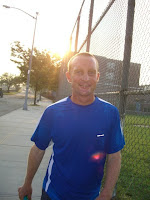 Grahak had told me yesterday that he wanted to run alone his first 2 laps on his last day. It is clear, not just today, but also on most of the last 46 days he has run here, that he actively tries to pray and meditate within himself. Before he walked over to the start he was clearly trying to dive deep. His, has been an epic journey that has taken him far on his feet and even farther within his heart. 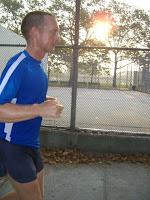 He is more than willing to share his thoughts when I join him on his third lap. He is not at all self congratulatory about his achievement here. He just quietly accepts the fact that he will soon smash his previous best by more than 3 days. He is also very matter of fact as he says, "th 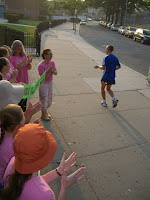 e last 10 days were really tough." How he transcended himself from last year, he says he accomplished by, "trying to go faster, push harder, and stay out later."

He has excelled at many sports and you can see, it has to come from, his keen self reliance and self discipline. His competitiveness here has been with the only adversary worth taking on heart and soul, himself. He says, "I never race with anyone, I always do my own thing." 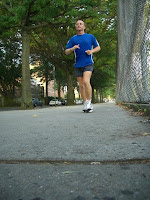 I know he wrestled for a time about whether or not he should come back to the race this year. No one could blame him for such a thing. Once you have sampled even a fraction of the challenge here you can know why. But he is also clearly glad that he did come back and by this evening his joy will be complete.

He tells me the unique story of how he volunteered for this years race. It is one in which all the love, humor, and playful mischieviousness his late teacher was renowned for came to the for. A runner had just finished last years race and all those who had already finished sat around exhausted as well. His Guru asked at this time, "Stand up if you are not doing this race next year." Of course no one stood up, and then he gave them all his beautiful divine smile. 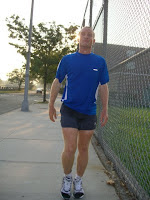 He tells me that, "I am happier than last race." He says that thinking of his Guru helps him as well as doing chanting and singing. He tells me that he feels closely connected to Sri Chinmoy at the course and often visualizes him at different spots.

I ask him about some of his physical problems and he tells me a long list without any complaint. I have to prod him to learn of his nose bleeds, his throwing up almost every other day, and now his back, which he says, "is killing me." He doesn't mention the rash that is on his lip and down part of one leg. He mentions that yesterday he spoke with his parents. I wonder, but don't ask, if he has told him about some of the difficulties he has had to endure along the way. He tells me that they are proud of him and that the dog is good. 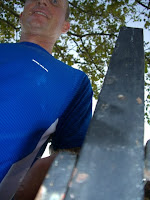 In the past, he has shared with me, some of the little habits, that he and other runners have grown accustomed to over the miles. I mention the steel fence at the far corner of the course that he and others have continually lifted up the lever as they passed and dropped it with a large clang. So to indulge my curiosity one last time, he playfully picks it up for me, and yes, it drops with a clang.

He says that one of the pieces of good advice he received was from Pranab who suggested that he set clear goals for himself. By 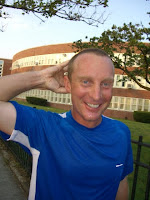 working this out, he would have something more concrete to work for. It is his spiritual life though that has been his savior along the way. He says that, "Guru's grace takes away things, pains, poison, and worry." He says that for him if he just smiles, then Sri Chinmoy, takes his poison and replaces it with love, affection, and concern." Without question, this race, "is the hardest thin 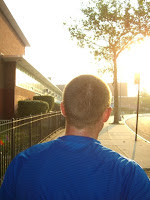 g I have every done in my life. It is also the most rewarding."

He says that it is almost miraculous what we all can achieve if we just allow the Supreme to act, in and through us, "If you are willing." If there is anything he can clearly understand about the great effort that he, and the other runners have put in here, is that he at least has some sense for, "All the intensity you need for God Realization."

It is now nearly 12 hours since he started the race this morning. When he started running then, the humidity was so great he was perspiring almost instantly. In less than 2 laps there were large wet stains up the back and front of his shirt. It would be like this all day. It is now just before 6. Race director Rupantar says of Grahak, "Full tilt, its the only way he knows how to run." 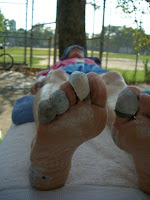 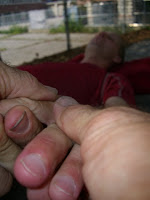 Asprihanal is getting a little treatment after his great victory.

Suprabha is taking a little break before hers. 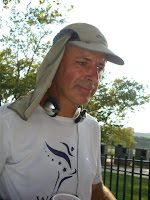 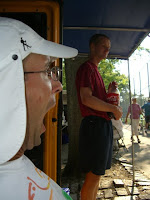 Abichal had a good day yesterday with 60 miles under his belt. He will likely finish with a personal best.

And two champions standing patiently on the sidelines will soon have another join them. 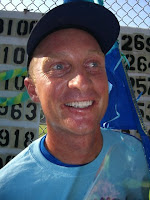 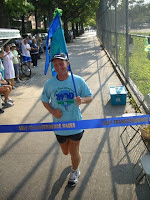 It all happens so quickly and is so brief, compared to the long long journey, that took him 46 days, 11 hours, and 53 minutes to complete. The beauty of the finish is something worth savoring. The smile of the finisher a sheer delight.


And if there is one thing, that would make this champion happier, it just might be, to share it with the one, who made this victory possible. The one who called him back, through the veil of his doubt. What a gift it would be, to offer up once more his heart's favorite quality, gratitude to Sri Chinmoy. 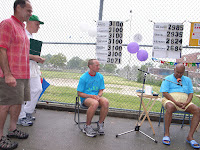 Is not heart's gratitude.

Is not heart's gratitude.

Excerpt from I Need Only God by Sri Chinmoy
Posted by Utpal Marshall at 4:01 PM

Congratulations to Grahak on reaching his goal. It was my pleasure to meet him and visit with him for a few minutes when I was in New York and stopped by the course with my nephew on Day 29. Despite the many long days of running that he had completed by that time, I was impressed by his enthusiasm and the joy he showed as he continued his journey.

Thank you so much Utpal for posting this wonderful account of our GREAT Aussie Champion Grahak. We were there last year and sad we couldn't be this year, so your account of his journey has helped us to once again feel part of this immortal event. Naturally we are enormously proud of him! Our hearts swell with gratitude and joy in reading of his triumph.