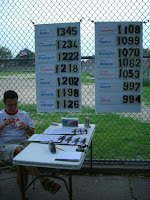 To the 3100 mile runners, today is just day 20. To the rest of the country, it is quite a bit more significant. It is July 4th, American Independence day. 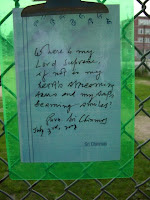 Where is my Lord Supreme If not in my Heart's streaming tears and my Soul's beaming smiles?
Guru Sri Chinmoy 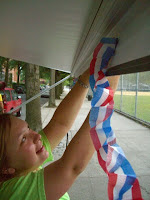 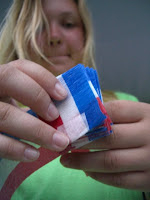 The mood is festive, even at so early an hour. Alakanada is putting up some bunting and there are a few small flags here and there around the staging area. 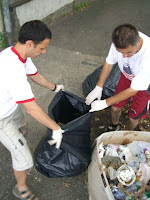 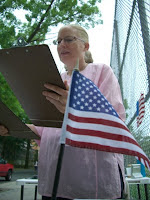 National holiday or not, garbage has to be taken care of, every day.

Pratibha is one of the early counters and doesn't take her job sitting down. 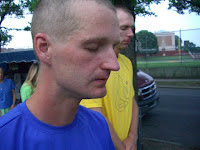 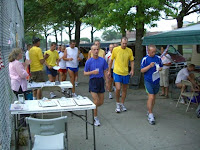 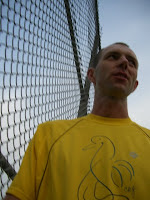 For the last 5 days Pavol has been getting stronger. Today both he and Ananda Lahari will break through the 1000 mile barrier. 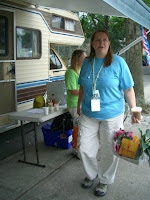 It is impossible to picture the race in the morning without the appearance of Parvati and her singing group. She arrives early carrying with her, prasad for the runners, and flowers to decorate the table. 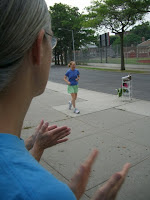 I am surprised to learn, that it was only in 2006 that her, and her group, first started making regular appearances at the race every morning. It was the year that Sri Chinmoy was going to turn 75. They decided that to honor this birthday, they would come every day and sing 75 songs for the runners. This, they did, until the race concluded.

When 2007 came, and they had not resumed their regular routine of singing at the race. Sri Chinmoy said to them, by way of giving them a rather large and obvious hint that they should return, said, "What, 76 is not special?"

A routine was t

hus established that became a fixture of their lives, the entire neighborhood, and of course for Sri Chinmoy himself. Who for days weeks and months would drive his small red car around the course several times, and then on his last loop, stop by Parvati's group, and teach them a brand new English song every day.

This pattern continued in 2007 well past the end of the race, and certainly lasted into September. The girls now, not standing in front of Thomas Edison High School, but rather down near the tennis court. They say that this went on, and included even one last drive, after he had returned from Russia that fall. 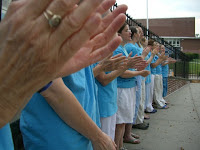 If there was any hesitation about returning to the race in 2007, there is certainly no evidence that there is any doubt, in any of the girls minds, that they should be here in 2008 and beyond. Collectively they describe this offering of music to the runners as their, "Sacred duty, Guru wanted us to do it." They tell me that, "You feel like Guru is here inside the runners." 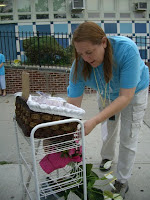 The entire course is steeped with grace and imbued with a unique divine history. As I stand next to Parvati and her group however, I can't help but feel as I stand and talk with them, at their little alcove, that in some ways, this may be more hallowed than any other spot on the loop. The girls tell, me that so many of his immortal English songs, were composed and learned at this very spot. Songs like, "I am so Fortunate, and Last Night I had a very very Significant Dream."

The size of the group varies, depending on how many girls show up. Locally there are 18 girls, and when visitors come, the number increases to 25. To say that they are well organized is an understatement. I am shown several charts that include who's responsibility it is to bring prasad, what color t shirt to be worn, and song lists, with lyrics, that extend for days ahead of schedule. This all painstakingly put together by Parvati herself. But to call the group well regimented is a mistake. They are organized for sure, but when they sing, the group has fun, and will laugh any time a mistake is made, or just because they are feeling joyous. It is after all, all about enthusiasm.

I ask the obvious question about how the group was formed. Parvati tells me that it all started on December 19th 1999 in Rio de Janeiro. It was the day after Paree's birthday and Sri Chinmoy had just composed the famous Enthusiasm song. 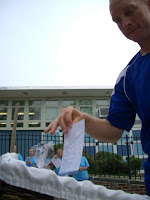 Sri Chinmoy had asked all those who were there with him on the Christmas trip, that year for questions. Parvati, innocently enough, asked a question that would change her life. She recalls telling him, "I didn't find the quality of enthusiasm very appealing." She tells me that a long answer to her query was given on the spot. She says however, that the true answer lay in the formation of her group of enthusiasm singers, and the long road they have followed since, has been the true answer. She says, "Guru answered it in life."

I ask the group if they feel self-transcendence played any part in their make up. They mention, that as Sri Chinmoy composed and taught them, more and more songs, their pace of learning songs exhilarated. That the whole experience of learning and singing, broke down mental barriers. 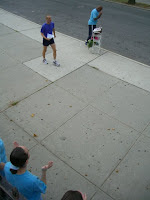 They also admit that as a group their musical skills as a whole are limited. They say of themselves, "we are not good singers." Few can read music, and most learn the songs by listening to tapes. They say, that despite their less than stellar abilities, Sri Chinmoy always encouraged them to sing powerfully. They laugh as they tell me their informal motto, "Sing it wrong, sing it strong."

They will sing today for about an hour. A good portion of the songs are ones Sri Chinmoy wrote dedicated to America. All tell me, that an hour a day of rehearsing, is necessary to be able to function well, with singing new songs every day. One of which, is the song that Sri Chinmoy had composed on that day, the year before. 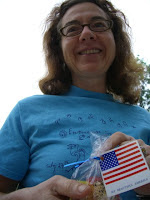 Parvati describes for me a routine that took place on the mornings when Sri Chinmoy stopped his car. That she and Paree, the most experienced musician in the group would go to his car window and he would sing them a new English song. Paree would be able to transcribe the song on the spot. Once the song was set, the rest of the group would join them, and learn and sing the song at his window. After which, he would offer them prasad. A tradition that they have now taken over, setting up a table of prasad for the runners. Aranyani has very proudly brought cookies today decorated with American flags.

Clearly they have played a most significant role, not only at this race, but also as a vehicle to spread and share Sri Chinmoy's songs, written in English. Their Tshirts are all emblazoned with art work drawn by Sri Chinmoy himself just last year. They tell me, that as a very big surprise to all of them, he gave them the first of the shirts last year on July 27. On it, in big letters is printed, 'Enthusiasm Awakeners.' All were surprised when he presented them the shirts.

The atmosphere, anywhere within a 100 meter range of the group, is infectious with joy and well, enthusiasm. And if anyone wants to kick start their own enthusiasm, they tell me the key is to start with sweetness. All seem so delighted to be part of this little singing institution, that just seems to be continuing, and getting better. Savita expresses it as good as any of them, when she says, "I am honored and grateful to be part of this." 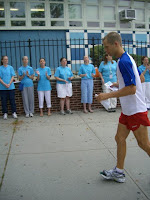 The runners will tell me, "They are fantastic. They manifest this race like anything." Another says, "One of the best encouragements. They don't fool around. They know why they come."

Parvati tells me that for them, they enjoy it when the runners come along and actually sing along. She jokes as she says, "At our best we can be an inspiration to them, and the worst, well we can at least move them along." 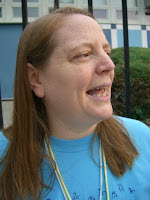 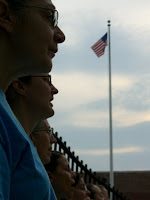 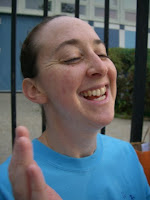 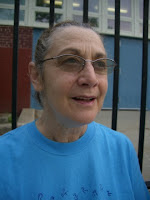 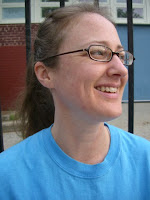 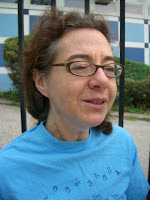 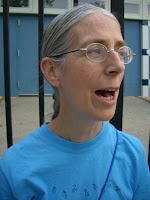 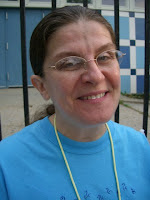 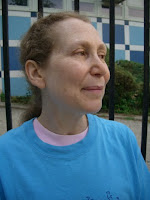 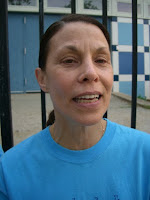 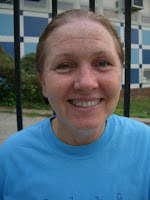 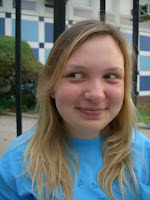 by Sri Chinmoy
Posted by Utpal Marshall at 9:40 AM

I am today visitor number 15001. All numbers with 1 fascinate me.
I like Parvati's Enthusiasm group, but the most impressing picture is when Parvati with her strong appearance arrives at this sacred ground, I can feel all the moments they lived with
this fragile earthly frame of Guru and
the meditations they get now with the heavenly frame of Guru.