Going Around in Circles as Always 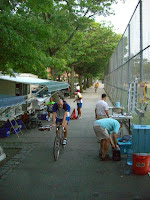 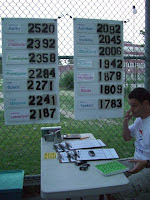 Yesterday, both Abichal and Suprabha passed the 2000 mile mark. Its a time in the race now, at least for some, when the goal is growing tantalizingly close. For the race leader, Asprihanal, he is just 7 days away from being able to sleep in, and dream of cool nights in Finland. 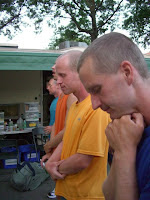 t up and tear 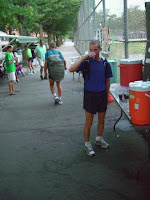 down. There are countless thousands of laps more to be run on the sacred, but very hard concrete of Queen s. Many more restless nights to come, in which you pray for sleep to take you, and then, just as a sweet dream starts to pull you into its enchantment, an alarm rings and you tumble back into reality.

WE SHALL ACCEPT AND TRANSCEND

As long as we live on earth

We shall have to accept certain limitations,

For earth is limitation itself.

Nevertheless, it is we who have to try

Excerpt from Transcendence-Perfection by Sri Chinmoy

Elmar is not certain how many years he has been coming here, to spend his summers, helping at the race. He says, it is either 10 or 11. He is a music teacher in Italy, and of course has the summers off from school. He says that one spring, he ran in the 6 day race here and also helped set it up. He tells me, "it gave me joy to run and set up." With that inducement he came back in the summer to help with the 3100 and has been coming back ever since. 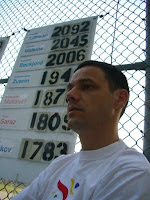 He tells me that in the beginning, "it was very intense, now its like a holiday." A holiday I might add, that a minute percentage of humanity would accept. Yet for Elmar he enjoys the discipline, and working in a team, in which, "everyone knows what to do."

Of course Sri Chinmoy was the original draw that drew him to this congregation of vans, tables, clipboards, clocks, sugary snacks, and potent drinks. He tells me that Sri Chinmoy would come 3 or 4 or even 5 times a day. And even if you were searching for clean trash bags, or rolls of paper towels, or had yet to cut watermelon, when the car carrying his Guru came by, life on the little patch of concrete suddenly just changed completely.
One moment you are planted flat on the earth, and then when that smile of his beamed out from the little red car, you could see the bright glow of the distant shore of heaven itself. And even when the car, and its tail lights, and the driver with his celestial smile, was blocks and lifetimes away, the dazzle and brightness stayed with you. You could continue to work, at even the most menial task, and know without question, you were the most fortunate person on earth.

I ask him, how it is for him, being here now. He smiles with confidence, and says, "I feel it right now, you can see outwardly, that something is going on." He tells me that at 10:30 he has to help put out prasad, in front of which is placed one of Sri Chinmoy's small carpets. He says that on many occasions, just touching the carpet, he feels, "his love, and light, and everything." 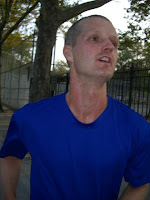 Asprihanal starts the day with just 480 miles to go. When I ask him about his day he says, "I am going around in circles as always." He ran a little more than 67 miles, in yesterdays heat and humidity. Last year when he ran his personal best he averaged 71.78 miles. Still he thinks, that this year, will be his third best time. Of this he says, "Sometimes we do our best and sometimes we don't." He is happy with his training and wonders if perhaps he could have practiced some more speed work. Going into the race, his 2 mile time was over 12 minutes, when normally he likes to run around 11:40. 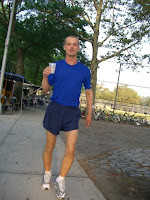 He is an extraordinary champion. We well wishers and mathematicians who can tap numbers into a calculator can't even begin to fathom the effort and challenge he has taken on here for so many years. Even if we were granted a key to peer inside his heart, we still could not understand what he has accomplished. What mountains of transcendence he has climbed. We can keep track of his laps, but never of his journey. 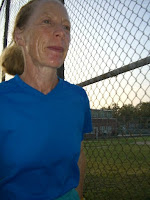 f his experience here, "most of the time it is nice but not always." At that moment we are coming up behind Suprabha. He points to her and declares that she always has a good time. Now a spontaneous discussion blossoms briefly and Suprabha smiles at this encouraging word from him. She agrees with this but adds, "sometimes I have challenges and difficulties." And then, just like that, Asprihanal slips away and I settle in beside her.
She knows that a personal record is not in the books for her, but that victories and self-transcendence can come in other forms and guises. Something as innocent, as running 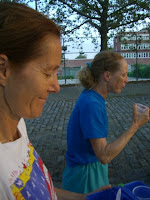 121 laps on her first day, she sees as something precious. She tells me, "I haven't done that in years."
In other ways she finds avenues to challenge and push beyond her limits. She describes, how she always used to go home at 10:30, but realized that she could stay an extra hour, do more mileage, and be none the worse for wear. "Small things like that mak 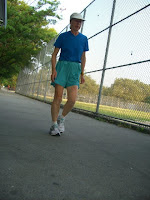 e a difference. Every year I find something that is new."
And even though she will set no personal record she says with so much delight, "I am more than a day ahead of last year." And let there be no mistake, about where the inspiration for every lap and mile comes from, she reminds me, "I am perfect evidence that Guru is still here, I could not last even one day here without him." 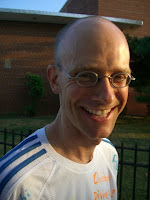 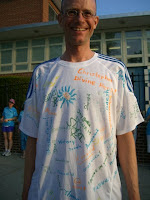 Yesterday Christopher wanted to show me his wakeup hat, and today, he is very delighted to show me something even more impressive. A shirt he has just received from the Swiss disciples, who have signed it, and some have drawn pictures on it. He tells me, that it gives him such joy to wear it, and that he feels the energy and love, they put into it by signing it. No doubt he will not have to wear the wakeup hat at all today.
Posted by Utpal Marshall at 5:01 PM

Your site is divinely addicting!