A Thing about Tuesday 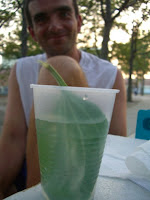 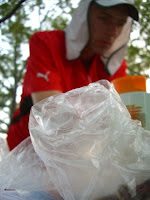 It is only on Tuesday, alternate side parking day, that the bits and pieces of the runners lives are so openly exposed to the eyes and cameras of the curious public. Pranjal of course is all about fresh warmwood leaves. Pavol has dug out plastic bags filled with supplements. He ran 54 miles yesterday. His best total since day 6 of the race. Tthis was 18 days ago. It seems his shin splits are at last better. 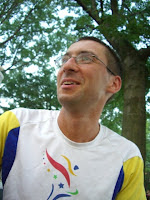 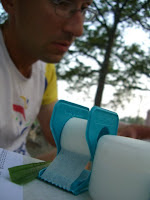 Pranab is, tapes and creams, that is, at least ones, that his skin is not acutely sensitive to. He ran the highest total yesterday, 69 miles. He is almost certain to reach the half way mark today. 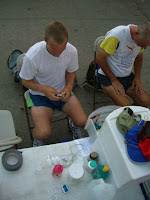 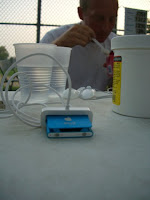 Grahak is just 5 miles up on Pranab and he too will pass the half way point today. I have never seen him work on his feet in the morning when he arrives. Perhaps, it is something he does before coming. He knocks back a yogurt, and his ipod is getting charged for a long day on the road. 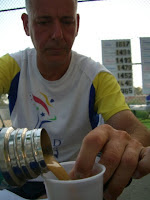 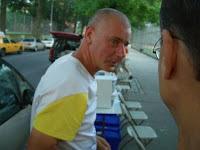 Abichal had a good day yesterday, with 61 miles, also his best total since day 6. I wonder if there is a connection, as the same was true for Pavol. Perhaps it is a coincidence, or perhaps it is just a result of the fresh coffee that Niriha brings specially for him every morning. 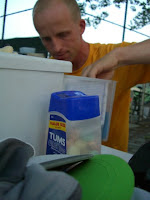 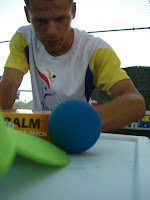 The blue ball and Petr are never far apart. He can bounce it and run for hours and miles.
The Tums are not Ananda Lahari's. Though the assortment of hats are all his. 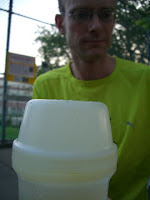 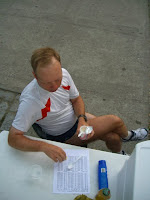 Sutisheel always has a yogurt and looks at the lap sheets. There isn't much to read about himself, as he has consistently been running 64 miles, except for day 19, when a sick stomach held him to 35 miles. This being his lowest mileage in 5 years.

Christopher brings a yellow beverage from home, that he sometimes carries round the course with him for the first early miles. 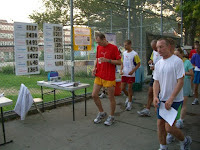 All the things that sit on tables, and fill peoples minds, are just left behind at the starting line. That is of course, except for lap sheets. Which have endless mysteries to be revealed about the world that was yesterday. All too soon, it will be all about today and the next lap, that needs to be completed. 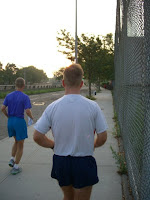 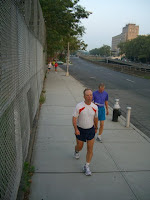 It is the first lap of a brand new day. First one and then another takes the lead for the day. They are able to run and so they do. Others behind will walk for now, until muscles are warm and loose. Till the kinks and aches of a sleepless night and yesterday's hard miles slips behind them, to be forgotten, or at least put aside for another time. 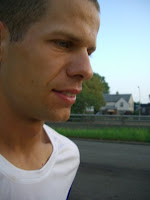 By all accounts Petr is having a great race. His mileage has been consistently good, and he is averaging 63 miles per day. If he is able to maintain this same rate he will easily transcend his 52 day total from last year. For him, he is just a day away, from the half way mark. He tells me, "that compared to last year I know more tricks." He also says, "In general I am happy with my miles." And then he gives a light laugh, "Happy I can every day go 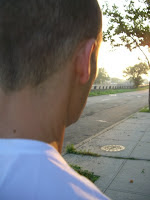 I ask him what tricks he has learned to make the 3100 mile race easier. He tells me that one thing he has learned is a method to reduce or eliminate the dreaded enemy shin splints which bedeviled him for 5 days last year. He says that Dipali has shown many of the runners a very simple technique for taping the area and also how to apply hot packs. He says that for him, the race is all about running, and adds, "I am grateful I am not walking."

The atmosphere, amongst all the runners 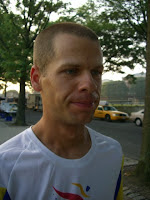 here, is clearly one that is all encompassing, and all about a sense of oneness, that is rich and strong and nurturing. It can be felt from the moment they arrive at dawn and on until long after the sun has set. In the darkness when they hop on their bikes and pedal home the sense of family is pervasive. He tells me, " we are all family. We are supporting each other." He says that perhaps this year, because of the loss of Sri Chinmoy, "it is eve 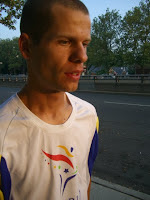 n more important to support each other."

Then we talk about a subject that most, if not all runners have experienced here at one time or another. In fact it is something all of us, whether we be long distance runners or people dealing with long road of life itself encounter. For lack of a better name, I will call it the 'bad patch." He says, "on the 2nd day I had a bad time. Everything felt empty to me. I wanted to escape." 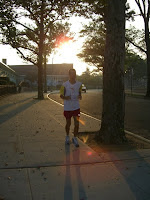 He describes this time, as when the crowds of supporters, who come out to support the race, had dwindled. Then he says he saw the musicians and helpers return, and felt renewed. That their music and their very presence was a source of inspiration and encouragement. It was a pivotal moment, when he says, "I felt Guru was still here." Than he tells me something quite remarkable. "I feel Guru is here, even stronger now than before, stronger than last year even." 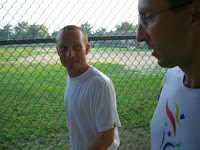 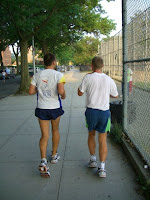 They have started the day just 5 miles apart. Grahak has just turned to Pranab and says jokingly have you passed me yet. They are running together, they will both pass the half way point today. They are brothers, in this together. 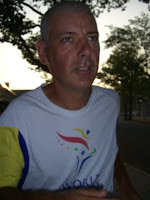 Excerpt from Transcendence-Perfection by Sri Chinmoy

Posted by Utpal Marshall at 2:06 PM

Beautiful work Utpal... Your rich insights are weaving our hearts together.