Some Call it Half Way 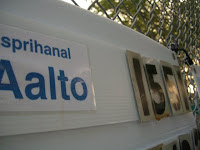 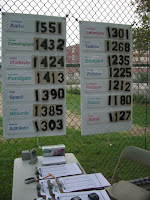 It is a milestone, that even someone, who cares little for distance running, can appreciate. It is turning the corner of the halfway mark and now finding yourself heading proverbially home. Yet, if Asprihanal wants to best his personal record from last year, he will have to work hard to do it, very hard. It has taken him 22 days to get this far. 43 days 4 hours was his time last year 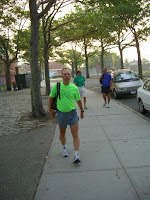 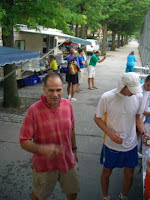 Stutisheel arrives with the van crowd, having now done 3 days in a row of 64 miles. 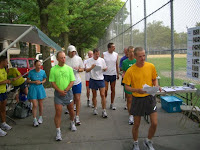 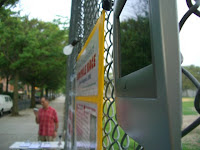 Asprihanal starts the day looking at yesterdays lap sheets. I am hear him say, to no one in particular that, "Diganta is back in business."
Reading the lap totals, is like a second language to most of the 3100 mile runners. They are acutely attuned to the ebb and flow of energy and emotion on the course. Who is up, who is down, who needs a kind word, and also who you should just leave alone until they have 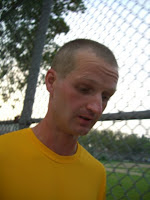 worked things out.
I ask Asprihanal for his thoughts on 1550 miles and he tells me straight off, "It is a trap to think of the miles." In fact those numbers really come second to the all important lap count. He says that for him, if this were a marathon, he would think, O, there is just 13 miles to go. In his case half way there is still a very long way. He tells me that in running 70 miles yesterday he did nothing out of his ordinary schedule. He was able to run this amount and go home by 10:30 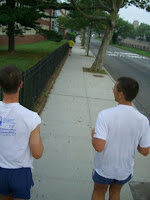 Smarana, who is running this race, for his 7th time, tells me, that he has even given lectures on it, back home in Austria. He tells me, "Every race is quite different. They are never the same." He say, the important lesson he feels he needs to become more aware of is, "to learn to enjoy this race more." This of course is a realization, that we mortals on the sidelines cannot grasp, even one iota of. Only the extraordinary individuals, who persevere and conquer this distance themselves, can claim even a fragment of this knowledge and understanding. 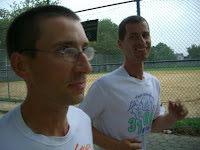 ined by Pranab on the course, who took over Smarana's 3rd place, spot just 3 days ago. Playing a bit of a devils advocate, I ask Smarana what he thinks of being surpassed by Pranab. He laughs at my indelicate remark. He says, "I knew his standard, he is up there." As he says this, he makes a gesture, as if pointing to some distant mountain peak.

They have run many miles together out here over the years and you cannot help but feel, that they are running here together as brothers, and not rivals. That each knows the cost, each must pay in order to reap the reward, of just completing the distance. Smarana says, he saw that Pranab had showed up this year, not in competitive shape and clearly overweight. A couple of weeks into the race, and both he and Pranab, are by now, finely tuned athletes, pushing the boundaries of their endurance and will power.

I ask Smarana, about something that Gaurish had said yesterday, that the runners had to face all kinds of problems that came up, while here on the course. He describes this as being completely true. That when you are home, you can avoid problems, and tell yourself that you will deal with them later. Here he says, "You have to deal with it immediately, there is no escape." He tells me, "You have to take it by the horns." 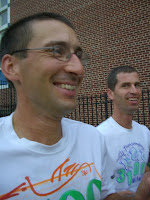 He says that in day to day life we are all granted the opportunity to be less mindful and unaware. It is possible to take a detour when the going gets rough in your life. But here, of course, there is no avoiding anything. Grahak passes us, and he speaks of him as being a perfect example of someone, who sorts things out quickly, and simply moves on.

He tells me that there is always a solution. If one approach does not work, than you just have to try something else. He says that for him, "Guru is helping everyone here with everything. He is providing solutions, we just have to stay in the flow." 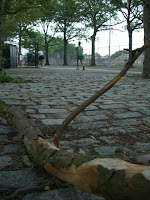 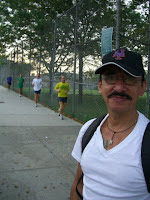 This is the big tree limb that came down with a crash, a few days ago.
This is Alfredo, who stands out here every morning waiting for his ride that will take him to work. Smarana tells me that he has been standing on this corner since he first started 7 years ago. He always smiles and greets the runners. He will do the same when he comes home again later in the evening. 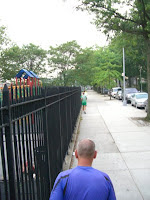 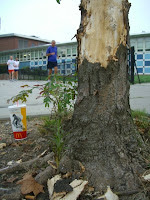 It might surprise you just how difficult it is to go around the course even once.

This is the tree in front of the school that was hit by the run away car last week. I am told the car looked worse after the crash.

O, O, someone left some trash out on the course. Who will pick it up? 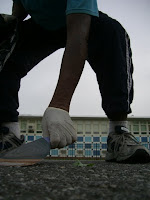 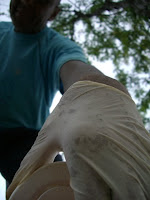 This is a job for Mr Selflessness, also referred to as Enthusiasm plus. The long gloved hand, leaves no stray bit of flotsam and jetsam, anywhere on the sacred course. Vajra describes this job as making it, "heaven on earth." 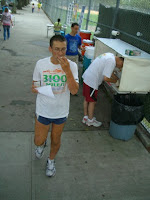 And yes Pranab has lost the extra weight, sometime over the last 1424 miles. He tells me, that he wished he had kept a little more on, until at least day 35, which is still 12 days away. 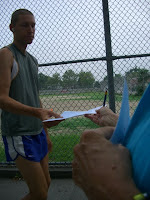 Diganta, who Asprihanal told me was back in business receives the morning prayer. 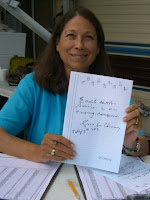 Given to him by the morning countess, Niriha.

Each Heart Smile
is an enemy-conqueror