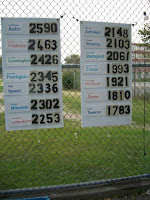 On this Tuesday morning, I find, that both Pranab and Asprihanal, ran almost 71 miles yesterday. If Asprihanal can maintain this pace, in about 7 days time, he can roll over in his bed in the morning, instead of rolling out. 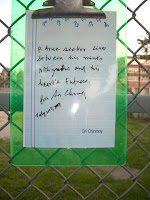 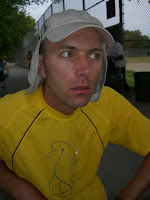 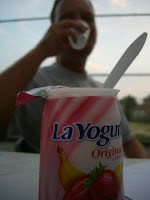 This morning, we learn a little more, about the powerful motivation, that keeps Pavol out on the course, day after day.

This is not a product placement for yogurt, but it does seem to be one of the most popular snack items, at 6 in the morning. 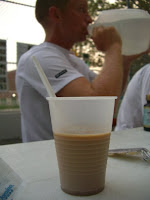 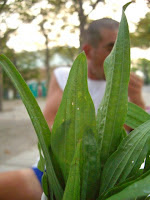 We will also spend some time with the man from down under, Grahak, who seems to be keeping well hydrated and caffeinated, almost simultaneously one presumes.

Its not about the leaves today, or the man lurking behind them. 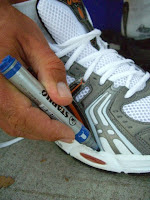 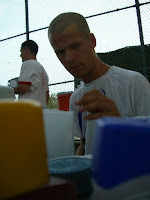 For those of you, who cherish your $120 running shoes, you might not like to see what happens to them, in the hands of a 3100 mile race. Here they are being marked, and then, soon to be carved up.

Petr reaching for the reachable. He ran 64 miles yesterday and has 764 miles more to go. 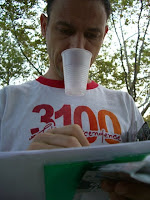 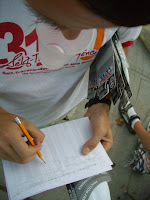 Elmar practicing, the ye olde art, of shopping yoga. When trying to fulfill the needs of 14 athletes you have to keep careful track of everything. I am not sure what part the plastic cup plays in his shopping asana. 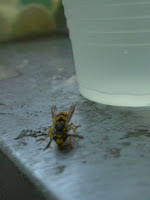 The wasps, are ubiquitous guests at this time of year. There is no shortage of sugar, on the snack table. 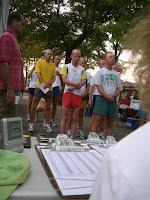 Fear and Power begin my morn.

Doubt and Light begin my noon.

Depression and Peace begin my eve.

God and I discuss my progress at night.

Excerpt from The Wings Of Light, Part 3 by Sri Chinmoy. 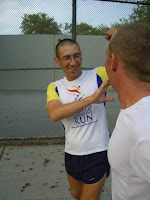 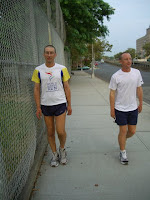 I start of this morning, running with Grahak, and we run the first lap in almost total silence. Then, there is one of those, 'boys will be boys moment.' Pranab comes up behind us, and then, the next thing you know shoulder punches are being exchanged. I am uncertain who throws the first playful punch,(please note*playful*) In an instant it is over and they are laughing together.

They are closely matched in this race. Pranab has been ahead of Grahak for the past 12 days, ever since he recovered from his skin allergy. Just 37 miles separate the two of them. He 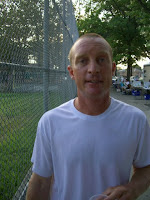 will tell me later, that he feels no pressure from Pranab.
Conversation at first, seems to intrude upon the pleasant tranquility of the morning. So, for a lap or two, we just run side by side. At the turn, up near 168th street, he reaches down and lifts up the small steel gate post, and lets it drop with a thump. I remind myself, that before the end of the race, I must catch, at least one of the runners in the act doing this little superstitious behaviour, with my camera. The last time we ran together, I also caught him in the act of picking up and dropping drinks along the course, and so I ask him, if he left anything out on the course over night. He tells me, that in fact, he has a secret umbrella, stashed behind a bush up near 168th st. He says, "it saved me once." The way the weather looks for the next 3 days it may come in handy again. 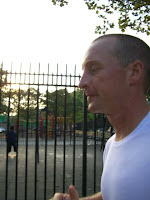 Getting down to more serious things, and knowing that he is likely going to smash his 50 day 3 hour record from last year, I ask him, to tell me when he thinks he will likely finish this year. He says, that he thinks it will take him 47 days, which is almost 3 days better than last years effort. He describes for me that this came about, because of a good start, maintaining mileage above 60 miles a day, and staying on the course for a half hour later each night.

Than he confesses to me, about a little disappointment he has in himself, fo 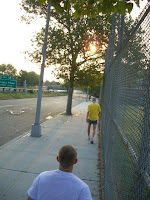 r his mileage total from yesterday. This I find astounding, as in fact, he ran over 68 miles yesterday. He tells me how, the evening before he got to 124 laps, at 10 past 11. He tells me, "I should have gone to 128, I had a massage instead." He has a regret, that he did not take the time, in working out the totals more carefully. A job which is difficult, even in the bright light of day, little alone one, in which you are being haunted by late night fatigue, and muscle cramps. 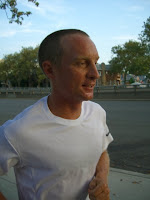 analysis of the night before, may or may not be accurate. He has been averaging 123 laps, so in fact, he did one more lap than he usually does. This microscopic decision, to forego doing, an extra 4 laps he suggests, just might make the incremental difference, between him finishing in 47, rather than 46 days. It is a calculation that is impossible for my mind to make, and perhaps, even for God himself. Yet in the culture of the race, these little choices, sometimes have consequences, that will only show up weeks later, in the final results. I hopefully suggest, that the massage, instead of keeping him from doing more laps yesterday, will allow him to complete even more laps today. He adds, "I am still really happy how well I am going."

I ask him about the fact, that he seems so independent on the course. We talk about some of the helpers who have made a difference in the results of the runners in past races. He thinks, that a helper for himm might make the difference of an extra lap a 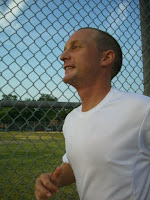 day. Which is a small amount, but one that can quickly accumulate. He reminds me, that the race leader, Asprihanal, has no helper, and has never had one.

Now that his finish, is so quickly approaching, I am curious about what things he would like to do, once the battle is over. He recites a short list of things, most of us take for granted, but which are denied to all who out here day after day. "I'd love to go to the beach," he says, "eat a meal off a plate, and press the snooze button on my alarm."

I tell him, that from my observation, he seems to be good at everything he does. Whether it is sport, meditation, or even acting. He laughs at this. He says, "After this race, you feel like you can do anything."

Sulochana, is one of the counters this morning, and it is in her house that Suprabha stays when she visits New York. Of the race she says, "I think it is fantastic." Of Suprabha's effort this year, she describes, "She is better than previous year 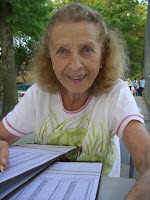 s." Sulochana has had a long career in running herself. It was not, too many years ago that she ran, and completed several multi day races, including the 700 mile race.

The experience of running these events, is almost impossible to describe, to those who have never taken on such a challenge. She says, "when you run, you feel it, and you know it." The qualities she thinks that are important in being able to do them are, "tremendous determination and self control." Of Suprabha, she says, "She is very focused." 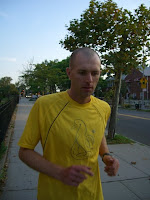 Pavol ran just over 46 miles yesterday. He has more than 1200 miles to go in the race, and, even by my sorry math, it seems almost impossible for him, setting so far back in the pack as he is, to have any hope of finishing before the cut off. Yet there has never been a moment, that I could detect in the last month plus, of anything other than optimism, and complete calm in his presence. 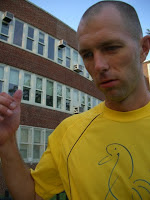 He tells me, that it is his legs that are bothering him now. He points down to them, and makes a gesture, as if they are useless. "I do not feel muscle," this he says not with disappointment, but in a very matter of fact tone. He feels, that it is the fault of his rapid weight loss that is the culprit. Having lost 8 kg in the first week, and another kg over the rest of the race. It seems, he has the enviable problem of not being able to eat enough. Yet, as he describes this bleak situation, he promptly adds, with much bright optimism, "I need to run 53 miles every day to finish in 60 days." As if this is eminently doable, and will in fact take place. 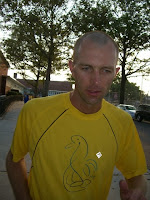 He is one of those rare jewels who seems to be devoid of self pity. And though he has gone further than he has ever run before, he has also been subjected to pain and discomfort, that in some jurisdictions could be considered torture. He has done all this willingly, and with a deep and serene inner joy, that is real and potent. You can sense, as well as see it on his face. He so often carries an expression, that is as bright as the July sun itself.

He takes his time to find the right words, that best describe, this most impossible of experiences. He says, "I would like to be here every year, like Suprabha. I need this race, it is my spiritual path."

He tells me that the expression, "never give up", is for him the very heart and soul of the 3100 mile race. He says, "This idea is very important in all my life. Not only in running." 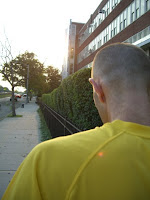 He tells me that when he was leaving here last year, after helping, he had a powerful experience when he got on the plane to come home. He says, that when he got to his seat, "I started crying like a child who has lost his mother." It came, he said, from his deep inner connection to the race. When he got home, he still felt as though he was still connected. There was no question in his mind than, about what he would do this summer, "This year I must be here whole time."

His optimism is infectious. For 37 days he has been battling against an army of foes. Neither the miles, the concrete, doubt, pain, or fatigue have diminished hi 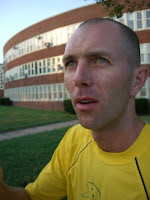