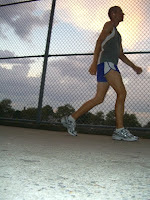 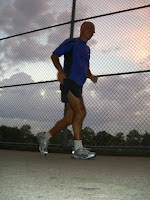 It is early Tuesday evening and I have come back to the race on this its 17th day. The clatter and buzz of the daytime hours is slowly settling down. The still of the evening approaches softly now. In an hour, 2 more runners will step into the 1000 mile club.


I haven't talked, to first time runner Christopher, in a few days. His mileage shows that his life at the 3100 mile race has been a bit of a roller coaster ride. The first week he was averaging 60 plus miles and lately he has been tottering back and forth between the 40's and 50's. 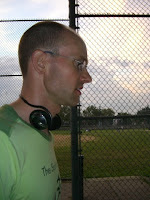 I ask him whether or not the race is turning out as he expected. "I didn't think about it I just felt I had to do it. There is quite a nice atmosphere here of toughness. It is completely different than I thought it would be. "
He describes a sense of eternity here. Being part of this experience just brings it closer. "You keep moving moving." 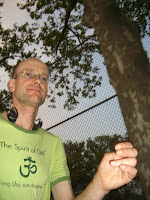 He says that his main job is trying to keep his consciousness high. It is something he is trying to be aware of all day long. Each new problem that arises requires new ways to deal with them. What's more, "everyone helps everyone else reach the goal. All you have to do is stay in your heart and go on."

I am just about to leave. The brightness in the sky has dimmed and night is settling in. He wants to tell me one last important thing before I go. 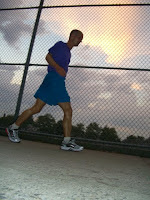 "I am still, very, very grateful, to be part of Guru's manifestation." 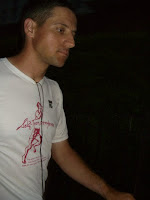 Sopan, who has come back to the race after a one years absence, is struggling. The first two weeks he had great mileage, but now, he is clearly in pain, and not moving well. He tells me with much courage and good spirits, "I have a problem right now in my lower back. It weakens the legs and shuts them do 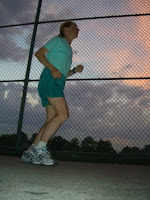 wn."
The good news is just over the horizon for Sopan. Tomorrow he should definitely complete his first 1000 miles. 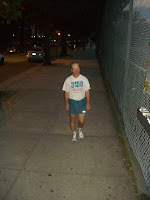 I am there, as Stutisheel completes his first 1000 miles. He is greeted by his family, with smiles and best wishes, and then moves on quickly, and seems to be swallowed again by the night. I catch up with him and ask, what it means to him to run 1000 miles. He smiles as he tells me, "Nothing, the numbers are not connected to the 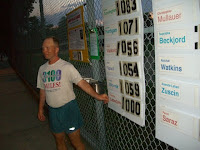 experience. This is the essence of the race."

Diganta will also complete 1000 miles, a short while later.
Stutisheel has been running well for the last few days. Over 60 for the past few days. He will run another 8 miles before he goes home this evening. I will have left, long before he himself, departs from the course.

It's Voirabh's birthday and he is celebrating with some friends playing music for the runners. 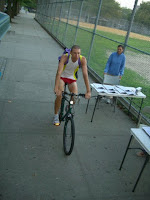 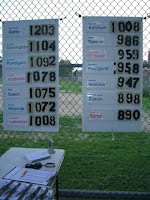 Diganta arrives on this Wednesday morning, after completing 1000 miles the night before. He and Stutisheel start the day tied for 7th place. 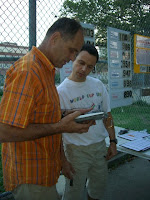 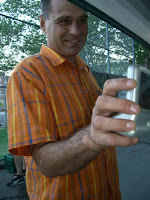 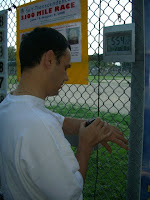 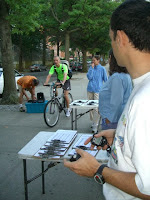 Elmar obviously has a lot of confidence in the new atomic clocks. He sets his watch by one. Asprhanal's streak of bicycle riding is now at 3 and rising. His continuous days of high mileage is a more significant accomplishment. He has run 200 miles farther than anyone else. 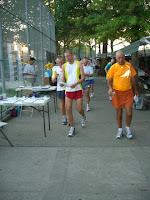 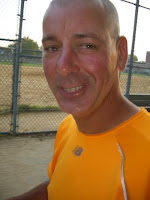 Abichal stands out this morning in his bright orange running attire. He had a good day yesterday and his look is as glowing as his clothes. He is very happy to tell me that he was able to run 111 laps yesterday versus 106, which is the number he ran for a few days prior. He tells me that he has some shin splints, but as a whole is, "running pain free." 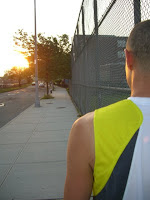 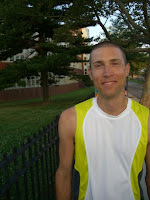 I ask Diganta about what it means for him to run his first 1,000 miles. He tells me, "it is like a stepping stone. It gives you confidence." He also describe that up to now has been a warm up, "the enjoyable part of the race will start now." He added with amusement as he ran off, "This is where other races start. They miss the best part." 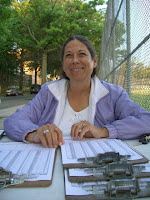 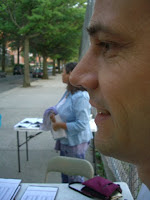 Niriha is counting laps this morning. She has been a big part of this race since its inception. She has done just about everything, that can be done to help and encourage the runners. I ask her what she likes most about this race. She says, "I like the heroism of it. In the spiritual life heroism, of all qualities is needed to proceed." She adds, that other qualities are embodied in the heroic spirit, they include love, patience, perseverance, and self giving. 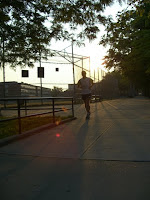 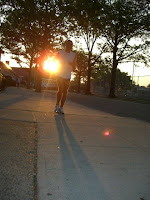 She tells me that she has a tremendous admiration and gratitude for each of the runners. "They show what is possible. Basically it blows my mind. It is remarkable what takes place here, every year."

Posted by Utpal Marshall at 4:25 AM