Their Job is a Lot Harder than Mine 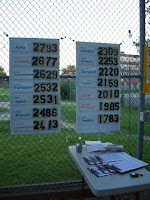 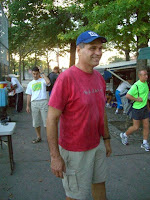 Where yesterday dawned so dark, wet, and dismal, this morning begins, by showing itself to be quite the opposite. The air is fresh, as though scrubbed clean, and it feels like a brand new day.

Despite the foreboding start, 8 of the 13 runners posted better mileage yesterday than the day before. 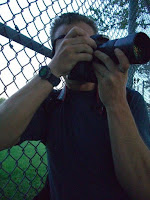 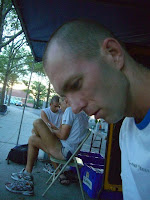 This is Jowan's third year, photographing the race. He is very serious about his craft. He feels that, nothing less than giving his very best is good enough, for this most significant event, the 3100 mile race.

Pavol broke through 2000 miles yesterday and had his best day in almost 2 weeks with 52 miles. 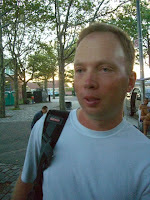 Stutisheel had, what can only best be described, as a disastrous day of running yesterday. It was only 39 miles and is his lowest since long ago day 19. When he arrives, I ask him, as his daughter Alakananda might, "How is Daddy?" His reply, "Daddy is dead." He says this with good humor, but describes for me that his energy is inexplicably low. 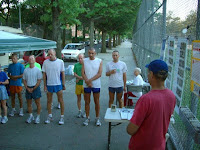 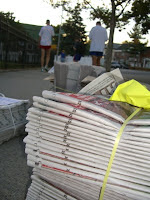 A pile of newspapers arrives every weekday morning, in front of Thomas Edison High school. Since the 3100 mile race started back in June, the world has been entertained by a lot of spectacular sporting events. Whether it be Tennis, golf, soccer, or the Tour de France. These sports come in bite size bits of media. A startling picture here, an inspiring caption there, and an action packed quote, that sounds wonderful and makes us feel, for a moment at least, as though the world has just become a better place to live.
The 3100 mile race is of course nothing like that. There are no tiny bits really. It is just so big in every way, it is difficult to get a hold of. It is hard to understand, hard to even imagine what these athletes have to endure. How can anyone really comprehend, the force that inspires them to take part and go on, day after day. The race may not make the world a better place, but it does make the runners, who come here, and sacrifice so much, better people. And maybe, just maybe, we who watch, and care, and identify with the struggle, become just a little better as well. 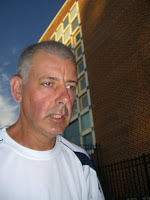 Abichal is the road warrior today. He tells me that he has spent the last 3 days doing nothing but walking on the course, and now he has to, "learn how to run again." He said that walking has become so ingrained that he feels that running has to be learned from scratch. He tells me that last night he practiced a bit by running 5 meters here and there. While we are walking, from time to time he does just this. 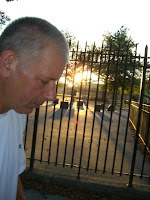 He begins to describe some of the technical numbers for his race. He tells me about doing 9 minute laps and says, "You need to do 7 laps an hour." He managed 50 miles yesterday but says with some disappointment, "I couldn't get to 100 laps, the ceiling lowered."

We talk about what it is like to run with other runners. He tells me, that it really depends on whether or not, you have the same speed as that person. He describes it as being on the same 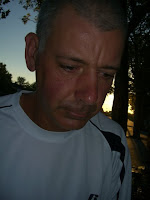 frequency. This also applies, to any, and everyone, who comes by and enters the orbit of the race. If they contribute, and are in tune with the dynamics that go on here, they become a joyous part of the experience.

Ultimately he describes a greater and deeper consciousness, which is the race. Car accidents can happen on street corners close by, and the world outside, the sacred loop can be in tumult or in ecstasy, but it does not effect the great cosmic innner game of life, 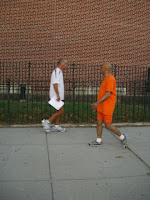 
Swami Parameshananda, is nearby resident, who goes out most mornings at 4:30 for his daily exercise. His running attire matches the color of his robes that he wears the rest of the day. His Hindu religious order requires him to travel a lot, but when he is in town he tells me he likes to run here in the early morning.

He tells me that he likes to run on the loop because, "It has been spiritualized by the runne 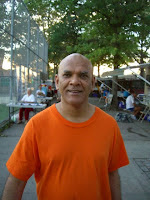 rs. It is the main beauty of running here. I use it for my own well being." 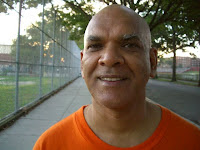 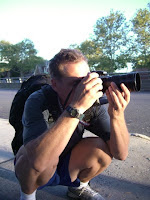 When I come upon Jowan he is hard at work focusing his camera and himself, on the runners. The whirr and click of the camera is incessant any time a runner comes into his view. He is trying for a dramatic shot into the sun and he is finding it difficult. He tries many times to get it right. 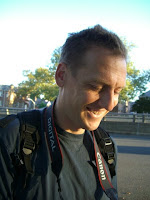 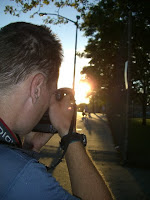 chronicling the race that was going on here. When I ask him why, he answers, at first with something simple, "I like runners." He is busy of course as I ask. Between clicks, and jogging up the street, stopping, stooping, and then popping up again to go somewhere else he says he shoots about 300 pictures a day. He laughs as he says, "The runners go 3100 miles and I shoot 3100 pictures." 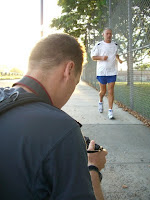 photography. He in turn is inspired by the race, and calls it, "A powerful manifestation of the divine," He feels grateful to play even some small role of showing this incredible event to the world in a proper and skillful manner. He says, "I come because I get to document the most important moment in these people's lives." 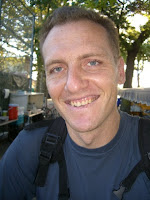 He also describes how it affects him personally. "I feed off the race like they do. It is Guru's inspiration. It is big enough for all of us. What drives them as well drives me. There is a lot of oneness and commitment. Their job is to run, mine is to take photographs." He laughs as he adds, "Their job is a lot harder than mine." 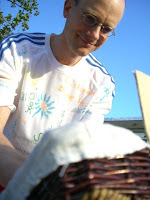 Christopher will reach the 2000 milestone today. According to his recent results, he had a good day yesterday. He had described briefly for me, at the beginning of his race, a philosophical understanding of the race. I asked if he had developed his concept. He tells me with a laugh, "My philosophy went into the garbage. Now it is more simple."

He tells me that he too, feels like he has to learn how to run again. He has had 2 days recently when he did not even make 20 miles. "It is the first time I am feeling like running again. I forget how to do it. I couldn't do it for 30 days." He says this is not of course a literal thing. It is just that when 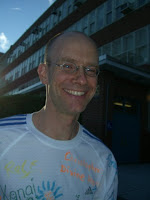 you have spent so many days without experiencing the running sensation, the body gives the impression, that it does not know how to do it. It is more about feeling than fact.

Of the race he calls it good experience. He then tells me that he has received so much by being here and being part of it. He says, "You suffer so little in comparison to what you gain inwardly, which is unimaginably big." 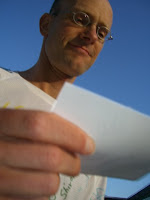 I ask him what he feels about coming back here next year. He tells me emphatically. "I have to come back. If I care at all about my spiritual life, I have to come back."
We pass Parvati's prasad table and he picks up the daily song, and reads the lyrics. 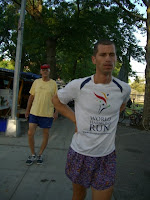 Trishakash is on the course doing his very brisk and regular 2 mile walk. At the age of 76 he is still very fit and has spent many years competing and training in both running and swimming. I ask him what his thoughts are on the race, he says, "Nothing but beautiful thoughts, it is just mind boggling." He clearly loves the 3100 mile race and is inspired by the runners, and they, too look upon him as role model. His life long dedication to fitness is a glowing example to all. His self discipline, clearly demonstrates, how possible it is for every one, to keep on training and stay fit. He tells me that he himself once ran 92 miles in a 24 hour race. 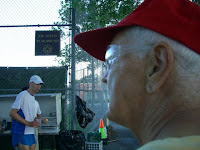 If one even dares to think, of slowing down, or giving up, Trishakash is a glowing example of the never give up spirit. He attempted to swim the English channel 3 times over 3 years. On his 3rd attempt, at the age of 57, he made it in 15 hours and 50 minutes. 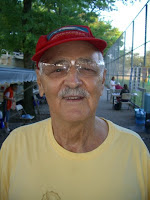 As to where the credit for his success in sports comes from, or even now, how the race goes on, the credit all lies with Sri Chinmoy. "He is still the inspirational force. He is putting it all on." His hand makes a sweeping gesture to include the dimensions of the little Queens block. He says, "All the activities here are inspired by the spirit of Sri Chinmoy." 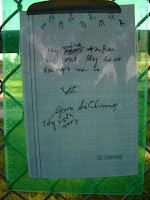 My mind takes me out
My heart brings me in.