A Flower Beside the Path 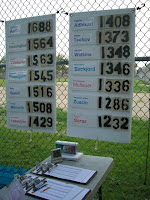 A very pleasant day 25 begins, with now 3 runners past the half way mark. Today will be notable, in that 3 more, will most certainly join them, by turning the magical corner, and making the journey for home. 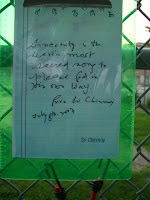 Sincerity is the heart's most
sacred song to
please God in
his own way. 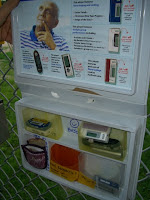 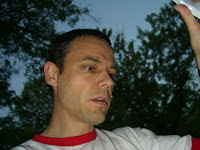 It is a small plastic box that hangs on the fence every day. By all outer appearances it looks like an emergency medical kit. The thing is, that the emergencies, that it is designed to fix are on the inside, not on the skin. And, there are no band aids inside, only a collection of mp3 players, provided by Parvati's group, with music to soothe, up lift and inspire. 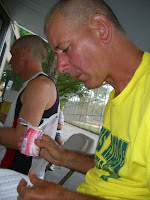 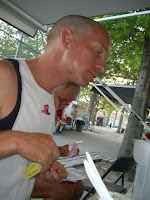 Grahak passed the half way mark yesterday and put in another day of 65 miles. He now has Pranab, just a half mile behind him.

Abichal had a phenomenal day yesterday with 62 miles, his best since his first week of running. 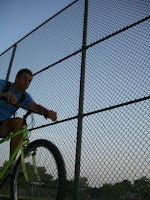 Sopan arrives at the race, as if he is riding in the tour de France. He also had a good day yesterday with 60 miles. He seems to be moving with less pain now. And, just in case you were wondering, the tour de France is only 2,235 miles long and is over in a blink, just 20 days long. 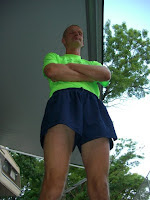 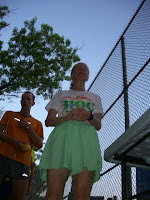 The little giants, at the start of day 25, of the 3100 mile race, Asprihanal and Suprabha. She is averaging 56 miles a day and he is averaging 70.3 miles every day. 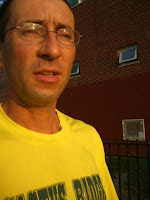 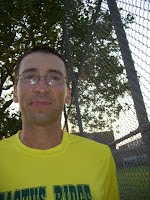 Pranab, also ran 70 miles yesterday, and is now within a half mile, of Grahak. Both of them passed the half way mark yesterday, but you do not get any feeling that there is any real competition going on between the two of them. Pranab tells me a story, about the guard, last year, who was sitting on a chair near the course. When he got up and moved to his car, a branch fell on the spot he had just been sitting. At one point we pass a very serious looking Christopher, and he says something encouraging to him. 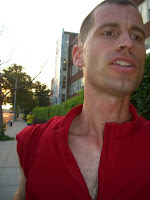 Sometime this morning, Smarana will also be half way to 3100 miles. He says, "It feels good, on the one hand, on the other, it is just a number." He tells me that in Vienna, the sidewalks are nothing like the hard concrete here in New York. He tells me, it takes 8 or 9 days to get adjusted to the pounding it gives the body. He says that Ara, the chiropractor, has no need to do any soft tissue work on their bodies shortly after the race begins. The pounding on concrete affects primarily skeletal and structural problems. He describes the race as, "it is like normal life, only condensed."

We come upon Christopher, and I ask Smarana to describe some qualit 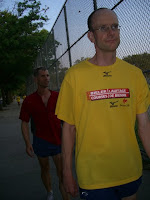 y about him. He tells me, "How fast he runs." Christopher, for more than 2 weeks now, has had some big time adjusting to go through. He had a good day yesterday, with 63 miles, but it has been more than 2 weeks since he was able to complete this same kind of mileage. I am told he has had to deal with various problems and pains, but this is his first time in the 3100 mile race. He has now run, almost twice as far, as he has ever run before, and he is not yet half way.

We run for quite a distance without any conversation. I know that I have come upon him at a delicate time. All the runners experience this from time to time. They have a great struggle in front of themselves, that they have to relentlessly pursue, in the most public of arenas. They are exposed, practically at every minute of their day. If they retreat from the course, for any period of time, they will loose precious time and distance. They are almost constantly aware of an obligation, to be out on the course and completing miles, big miles. It takes its toll on so many levels, physical, mental, and emotional 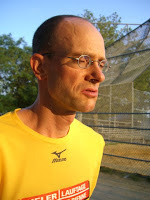 At one point Christopher spontaneously recites yesterday's poem. (top of Page) There are tears in his eyes as he says the lines, and I fear that I have come upon a moment, that was meant to be private. However, he has spoken these few words, with such sweetness and devotion. In just a moment, it appears as if, the recitation itself, is the cure for his momentary case of the blues. To my ears, it feels as if it came directly from his heart.

We run on, and I feel his spirits lifting with each new step. The light is always so magical at this time of day. The dawn 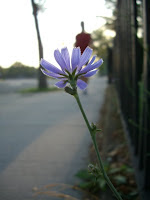 , with all its golden brightness, seems to be always promising eternal freshness, and infinite possibility. For me it is a blessing, to be here with the runners at this beautiful time of the day. After a short while, Christopher seems to be settling into a smoother and steadier flow. It is probably impossible to detect, on an outer level, but to me it appears that a calm and steadiness has returned to his heart and to his presence, after reciting the poem. 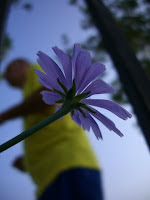 He tells me, "yesterday, such silence, its own world." He makes a gesture that encompasses all of the sacred ground, that he and the others, run upon each day. This short description, was his way, of sharing with me, an overwhelming sense of grace and beauty that he had experienced here yesterday. As he recounts, I get a sense of the wonder it must have been, and how by simply recalling it, brought it back to him once more and uplifts his spirits even more. 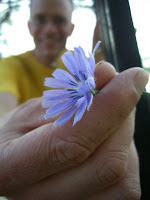 We pass a little flower poking out of the fence. Most people would have seen it, as just a little weed. To the runners, where even the smallest thing in their view, becomes larger than life, it meant real beauty and inspiration to him. He wonders, who even notices this little flower. It barely has any leaves and is mostly just a tiny blue natural wonder. We circle the course again and when we come around I point to one, and ask, "is this the flower?" "No," he says, and stoops to touch another, "this is the one."


Asprihanal and Grahak singing an English song by Sri Chinmoy

Posted by Utpal Marshall at 4:50 PM

Utpal, your ability to put everything in such
good writing and for us to read, is a
blessing.

It keeps our thoughts concentrated
in the runners. Christopher will do,
I pray for him and send him good thoughts. He needs our support.