Where the Flying Finns dare not Soar

By the end of this 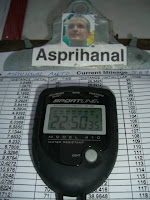 , the 9th day of the race, Asprihanal will be nearly a full 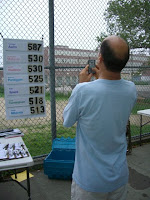 day ahead of the next closest runner, in second place, behind him. This morning, I had chance to run, and talk a little, with this Flying Finn, and find out why he has come here to New York, to run the 3100 mile race, for the 8th time.

Dhanu has just dropped off Asprihanal and a few others, and is taking a picture of the score board, and posting it on the internet. 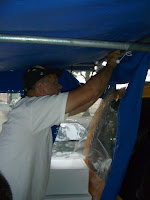 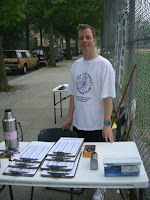 There is rain in the forecast and so Rupantar is battening down the tarps to make them weather tight. There is only a hint of it in the air. Michael does not think it will rain, and so is leaving the scoring tables out in the open. He will be right, it does not rain. 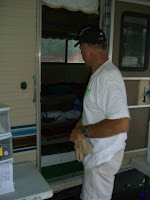 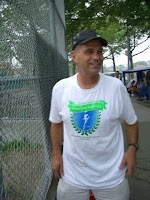 Rupantar is here, there, and everywhere at this time of day. His set up, is a big job, but he gets help. He has brought clean laundry for Christopher who has discovered some clothes in his bag that don't belong to him. Rupantar is putting them away in the trailer to sort out later. The system is not fool proof. 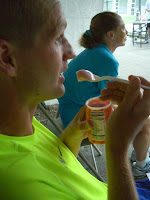 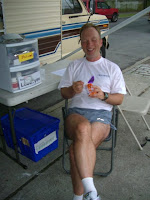 Asprihanal, who is a real veteran of this race sits next to the Suprabha, who is running this race for the 12th time. This will be his 8th. Yogurt seems to be one of the most popular snacks at this time of day. 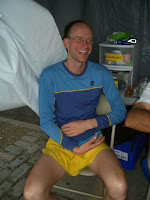 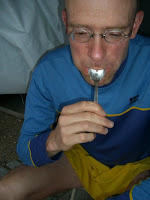 Christopher has just cracked himself up by using the expression, "Holly Smoke." He is surprised to learn where the term comes from. It comes from, when the Cardinals in the Catholic Church announce, that they have selected a Pope, by releasing white smoke. Nothing is too serious at this time of day. Here he is trying to eat some coconut butter. 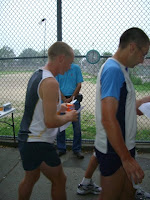 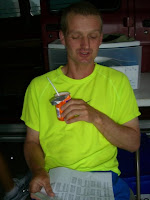 Asprihanal is looking at the lap totals for the previous day, and marvels at the two runners, who are a long way behind him, but obviously battling for second place. 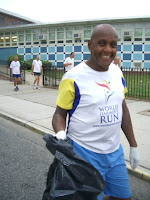 The race has just started and Vajra is doing the rather thankless job of picking up garbage with about the same amount of joy and enthusiasm most people have when they win the lottery. 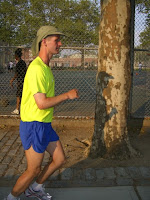 In 1912, at the summer Olympics in Stockholm Sweden, Hannes Kolehmainen won 3 gold medals and broke two world records in distance running. After him, would follow several generations of great Finnish distance runners, that seemed to end with Lasse Viren in 1976. Viren would win a total of 4 gold medals in Olympic competition. 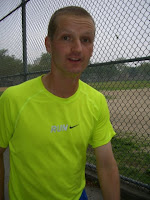 37 year old Asprihanal Aalto, has had a remarkable career in multi day running, that in sheer volume of races run, and competed at the highest standard in the world, is almost without equal. Of his 7 outings here at the 3100, he has won 4 times. Last year in 2007, he transcended himself by running a personal best on the course of 43 days 4 hours, that gives him the second best time in the world at this distance. If the world, paid as much attention, as they should, to a runner of his striking ability and record, he would easily be acclaimed, as the latest flying Finn of the 21st century. 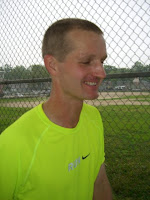 I run with him this morning for about 7 laps. When you watch from the side lin 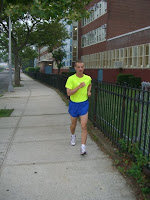 es, he does not seem all that fast, but he is. There was a point, after just a few hundred meters, that I am wondering if I can keep up to his pace, long enough to talk with him. He will continue at this same rate until about 11:30 in this evening. He goes home after running, on average, about 130 laps a day, about 71 miles. 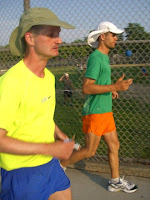 What is so impressive about running with Asprihanal, is that he seems to be, so light on his feet, that he barely touches the earth. There is, at times, a swinging motion to his arm and shoulders, that is not unlike the light beat of a birds wing. It just adds to the aura of him gliding effortlessly along the sidewalk. 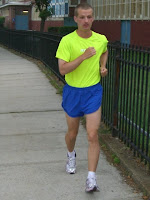 He tells me that the secret to his consistent efforts is, "I try to keep steady." "Everybody has their own speed, this is mine, 8 1/2 laps an hour." He makes it look easy. Once Sri Chinmoy was asked if he could run the 7oo mile race in the spring which takes place just a month before this one. He smiled and said, "Asprihanal can run the 700 like drinking water." 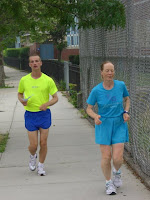 Part of his success, in this kind of ultra distance is the job he keeps in Helsinki, which is delivering newspapers every morning pushing a small cart. He covers miles every day, between 2:30 and 6:30. After work he will then go out later in the day and run for an additional hour. In the Spring, in preparation for this race, he increases his training to 2 hours. He has been doing this same job for 19 years. 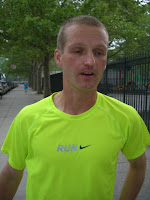 It took him a while to discover distance running. His first long adventures, was a long hike along the Appalachian trail, and trekking from Mexico to Canada. It was only in 1999 that he ran his first true multi day race, which w as the 700 in 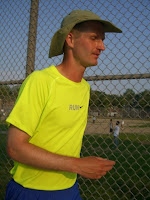 To say he took to the sport is an understatement. In one three year period he ran all 3 ultra distance races put on by the Sri Chinmoy marathon team in New York. During the 10 day race one spring he had his first real problem. A severe pain in his ankle and had to stop after 5 days. At this time it was just a month to the 3100 mile race. Much to his surprise Sri Chinmoy asked him, "are you coming to the race?" He smiles as he tells me this story. His look is full of whimsy and delight. It is an expression that says, I was given a challenge and just took it. He tells me that the injury proved to be no problem in the race whatsoever. Of the experience, "That was great."

He tells me that over the years he never has the same problem twice. He says, "I always try to feel that I have no problems. The Mind creates them. When you have problems you become humble."

We then talk about Sri Chinmoy. He says, "It is amazing how strong Guru's presence is here. I can look anywhere and feel it." He tells me how much he looked forward to all his experiences with his Guru. "I saw him so many times." He says that on the occasions he would offer him prasad he would sometimes hold onto it a little longer before letting him take it. As if to add just a little more to each blessing. 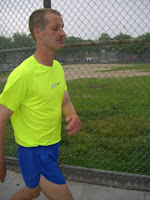 me about the year he did not run the 3100 mile race. He said that year he felt he wanted to take on the challenge of running and doing well in the 1300 mile race that took place in September. He wanted to beat 18 days. Unfortunately he did not succeed. Ironically when he came back to the 3100 the following year he broke the 18 day record for 1300 during the race. He ran an average of 72.6 miles a day to do it. He also tells me that he was not able to run the 6 day race this spring. His distance however, over 6 days here, would have given him a winning time in the Spring race. 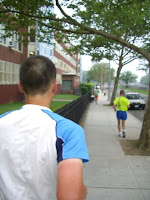 y he does this grueling race and he has never really told me why. He says, "it is becoming clearer and clearer. I do it for Guru. It is my way of meditating." He says that he does not feel accomplished at sitting in silence. For him, it is in activity like this, that he feels his receptivity to spirituality grow. 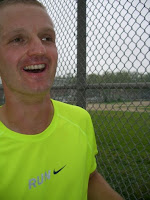 He tells me of an experience one year, in which he was not running well. He says Sri Chinmoy was at the race in a car and gestured for him to come over. He told Asprihanal, "can you not give me your mind, I will give you my heart." He says this really worked for him. He immediately started running better after that. He tells me, "the brain stops everything."

He tells me that even last year, his first day mileage was under 70 miles. He says once again Sri Chinmoy asked of him, "Can I not do my regular." He smiles as he relates this. He says of Sri Chinmoy, "he knew my capacity." That regular distance was 70 plus miles a day.

Near the end o

f the race he received another surprising request from his Guru. He was asked for something very specific. "I want you to do 72 miles." This was with 5 days left in the race. What was remarkable, is that, not only did this allow him to set a personal best, it also allowed his brother, who was departing that day, to be there for his finish. He smiles as he tells me, "everything about this race is about making progress."

I have to leave and come back much later in the afternoon. Asprihanal is not on the course and I find out he is taking a short break. I see him stirring in one of the vans and poke my head in. His mood has changed since the morning, he says, "tough day today." I let him put his shoes on and ask Sahishnu, the evening race director to tell me something about Asprihanal. 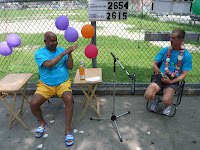 He mentions all the remarkable numbers associated with his achievements going back many years. Hi 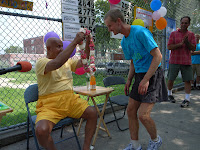 s statistics are mind numbing in their quantity and in their quality. He also mentions just how light Asprihanal is on his feet but also mentions something that is not so readily apparent. He says how very focussed he is at what he does. He tells me, that Asprihanal, "felt Guru's force stronger than ever, and is running effortlessly." 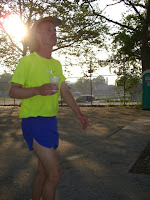 By now Asprihanal is back on the course and starts to move away quickly. I run to catch up. I ask him a few things I had not asked in the morning. I feel his strength and energy gathering once again. I ask him, what in particular has brought him back again this year. He says, that at the award ceremony last year, Sri Chinmoy said this, 3 times. "You are the heroes of my tomorrows Dawn." From this I gather that this Finn's flying days are far from over.

Posted by Utpal Marshall at 5:57 PM

beautifully written....just when you feel inspired to the max by the race you hear a new story about the runners that makes you transcend your max...