What He Can Do to Transform Us 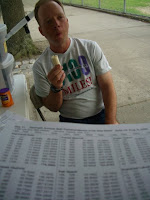 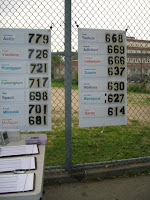 Stutisheel is doing well, perhaps one might even say, very well. He has run 65 miles a day for the past 4 days. Of course those are just numbers. But clearly he is enthusiastic, and with his family here, has a great support group around him as well. 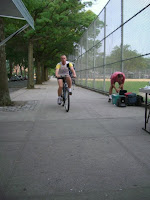 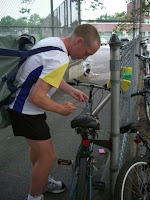 Grahak Cunningham is a 31 year old runner from Melbourne Australia. Last year was his first 3100 mile race. When I saw him here in New York in April, he was not at all certain whether or not he would return for this race. But he has, and is doing well on all fronts. We will find out more, about his experiences, a bit later. 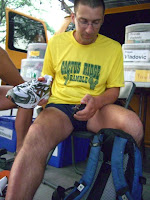 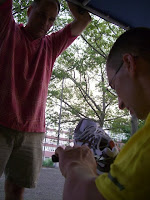 Pranab is suffering with a bad rash on his legs and hands. Rupantar is listening, and they have been trying for a while now to come up with a solution. Pranab thinks it is some kind of allergy, but he does not know what it might be that he is allergic to. He had it as well in April, when he was here helping, at the 10 day race. 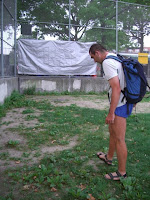 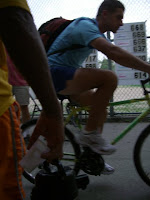 Pranjal, is searching in the field next to the starting line looking for the weed that some of the runners are applying to their feet to prevent blisters. Doris, has kindly informed me that the English name for the plant is Warmwood. Pranjal did find some and taped it to his foot. 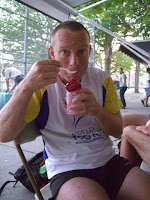 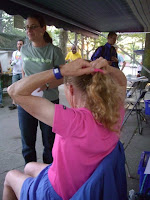 There was no yogurt rebellion today. The snack table had lots of them, none fat free. Palash has brought Suprabha today. 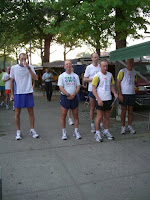 Just about everybody is on the line. When the group starts off this morning, they pass a runner, just arriving, on his bicycle.

I run the first lap with Grahak and we say nothing. I want him to grow comfortable with me being there. It is of course, so delightfully peaceful at this hour, it seems a shame 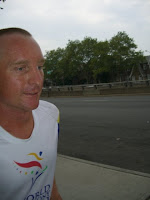 to pester him with questions, right from the start. It also feels to me sometimes, when I run like this, with my notepad and camera, that I am intruding on a very special and very select private group. After being together like this for 11 days now, they are so comfortable with each other, you get the sense, that they are all one big family. Sharing their joys, their pains, and their dreams of what is yet to come.

My first question, I ask Grahak, I know has no answer, but feel that I should ask nonetheless. I tell him, what several runners have told me, about what they admire about him. Several ha 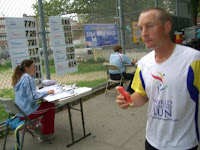 ve said, that they feel he can take on, and handle pain like nobody else. He tells me of course, that when it comes to this, nobody really knows what suffering each person goes through, on days when things are not going well. It is all, so very subjective. At the same time, there is such a steady well of calmness in him, as he talks about hardship, it is easy to see why others would look upon his character as being steady and firm, when in the midst of choppy water.

I also tell him, that several have told me, that he does not fret and worry about difficulties when they come. That when he makes a decision, he does so quickly, after measuring o 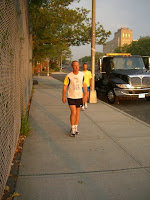 ut the options. He nods approvingly at this particular characterization.

He had a particularly good day on the course on Tuesday, which was his 10th day at the race, and I ask him about it. "I never got 70 miles during the race before. It was my best total in 2 years. I felt really happy." He said that he had approached the possibility of doing the big number with some doubt. And then decided, "to go for it." The next day he was exhausted and did just 63, but feels the effort was worth it.

He said that last year at this time, he was having a tough time with pain and swelling. He said that his attitude to pain, is to ignore it. That most often we surrender to pain, and let it take over. He feels, that if he ignores it, then the pain goes away. 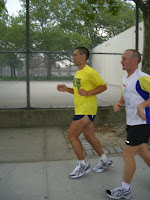 I tell him, that the day before, I spent the morning with Ananda Lahari, who was suffering from shin splints, and yet was extremely positive and happy as well. I read to him from my notes, what he had said about his happiness, and Grahak emits a wow. He says, that he had a much better mileage yesterday, than Ananda lahari, and yet, he says with admiration, "he is more cheerful than me." 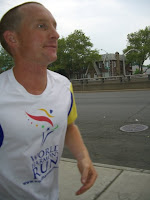 Grahak is known by most, as an accomplished sports man. His skills in many disciplines have been observed and admired by many. I have seen him play tennis and ping pong, I have heard from several that he is an accomplished surfer, thanks to Australian beaches, and he adds, how much he likes as well, Australian football. This, he says, is the one sport that he has received the most trophies for. He says, he is a swim instructor in his regular day to day life. He tells me frankly, " I love sports more than running." 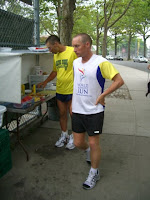 e him. They are part of the World Harmony run that is, for the first time circling the entire country. He says of their call, "it was really nice."

I ask him what, if any connection, he feels for his country. He tells me that fe 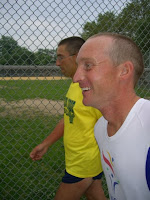 llow Australian Rathin, was the first one from there, to do this race. He says that Rathins, coming to this race, made him a pioneer. "I saw Rathin and wondered if one day, I might do it as well." He says, that what he saw of the race, that impressed him the most, was the spiritual progress the runners had after doing it. "I saw them coming out of it as better people."

He says that his own initiation into the race came during a trip to China in 2005. He had just run a 2 mile race, where he came third, and Sri Chinmoy said to him, "Have you run our longest race?" He said that his first reaction was, "O God." But he says he felt that his Guru was reading his mind. "I knew it was my destiny," he says, "I did not think twice." However fate intervened, when he applied to run in 2006, there were no openings that year.

In 2007 he was accepted, and in his first outing, set a new Australian record of 50 days and 3 hours. He tells me that when it came to this year, he was not certain in April he would come. Yet when he got home, he felt, "an inner voice you cannot ignore, telling me to do it." He said that his strength as a runner would have been useful to the Harmony run team, but he looked upon the 3100 mile race as a greater challenge. 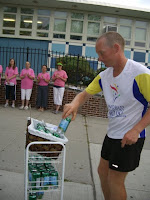 We run by an entrance to the school, and he sees a teacher who is leaving for her summer vacation carrying a box. She smiles and wishes him a good summer. He offers her similar best wishes. Obviously the teachers here, as well as the students of the school, have grown familiar with this little group circling their school day after day. It is so ironic to imagine the lives of leisure, they will no doubt have. While the runners push on through the hot summer with its endless long days and weeks. Just about the time, they are preparing to come back, the runners will have finished. We are just passing Parvati's singing group and he tells me what a beautiful creation this event is. He does not see this sometimes dirty and chaotic street as anything but a sacred path winding through a beautiful garden. He says, he feels so strongly this way, because of his many experiences here on the course with his Guru, Sri Chinmoy, who came so often last year, and heaped such attention and love and concern upon them. He tells me, that for him, "he carried us on his shoulders."

He describes, "the sunburst smiles, that carried with it so much." We are running along a quiet section as he says this. He turns to me and adds with a smile, 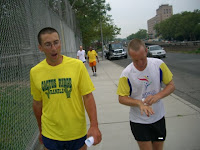 "You can feel that now as well, you definitely still can."

We have run for some time with Pranab at this point and Grahak tells him that he has some cream that might be useful for his rash. He notes some blood under Grahak's nose and says that he has some cream for that in return. Grahak laughs as he mentions how the other day he had just passed parvati's group and threw up. He says this, in the way of being, no 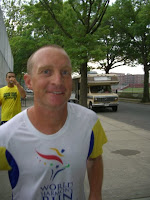 thing out of the ordinary, in this very challenging of events. He tells me with a sigh that, "Asprihanal makes it look easy." But adds, "that anyone doing this race has to be tough."

An article in New York magazine has just come out, and it mentions, that he told his mother that he was running this race by sending her an email. He tells me, "she was heaps better than I thought." Her reply to him read, "Well, I won't tell Dad just yet." 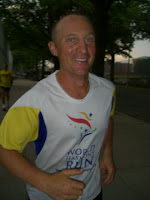 hard to pull myself away. I ask him to tell me more, about why he came back here this year. That, after having the experience of Sri Chinmoy, being at the race so many times a day, wouldn't he not only miss his presence but be discouraged by his absence. Without a moments hesitation he tells me, "I owe Guru, that I could feel him here, without him being here."

"He did, and still does, open up your potential. Can you imagine. I did not like running and your Master blesses you to such an extent that here I am running 3100

miles." There is a pause as these powerful words rush out from someplace deep within him. He seems in such awe at the magnificent stage that has been set before him and that he has been so blessed to take part. He turns and smiles, "what he can do to transform us."

Posted by Utpal Marshall at 5:17 PM

..the goddess of beauty Parvati is also the consort of Shiva, they are the parents of Ganesha, the remover of obstacles. So definitely Parvati should be written right. But your courage to run with them is for us, as we would run.

"Sincerity is Life the Tree.
Sincerity is the sweetness of our outer existence.
The more I value my sincerity-breath
the stronger becomes God's manifestation promise in and through me on earth."