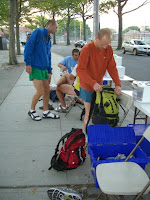 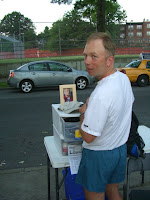 It should have come, as no surprise. After all, it happens every Tuesday morning, but the vans were not parked alongside the curb when I arrived. I realize it is, a street cleaning day and they are just across the street. But still, the race, every morning has grown so familiar. The weather almost identical for the past 9 days, and this little change in the 3100 mile race universe seems odd to me. 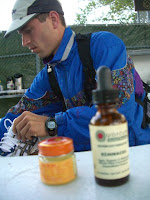 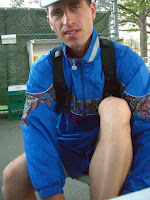 I am interested in talking with Smarana today. He has previously done the race 6 times before, and he seems to be doing very well this year. I notice some pills and remedies on his table that he is taking, that I have not seen before. I ask him if he is having any problems and he points to his chest and tells me he has some discomfort in his lungs.

He tells me, that he awoke this morning at 5 am, before his usual 5:20 wake up, and felt very ill. Suprabha had given him some pills, which he took. He tells me that it was so bad he felt like he could not come and run. He did some breathing exercises and decided to come any way. H 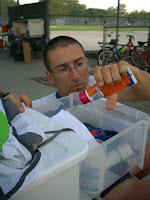 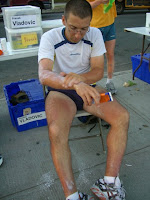 As Smarama starts the day with his chest pains, he is in third place. Nearby is Pranab, who is in 2nd place and just a few miles ahead. I only think about it much later, and wonder if they will be in a struggle together all the long long way. 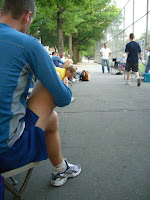 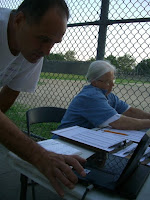 Rupantar gets the taped prayer ready. He is counting down to the start by announcing the time every 30 seconds. 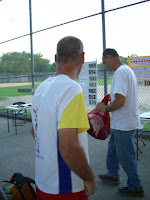 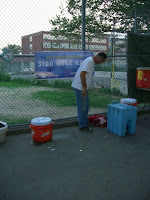 He discovers an unmarked bag of dirty laundry near the water table. Abichal lets him know that it is his. Almost daily laundry, for 14 runners, is no joke. 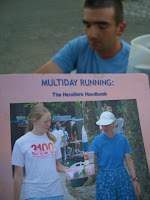 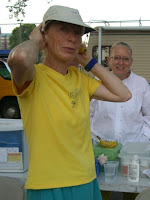 I notice one of Abichal's multiday running helpers handbooks on one of the tables. I can't quite imagine who is reading it at this stage of the race. I find it ironic that multi day great Suprabha is featured on its cover. She is standing just a few feet a way with Pratibha, who has brought her to the race. 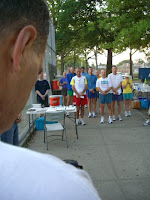 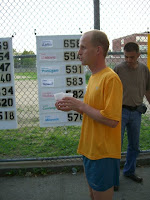 Ananda Lahari gets to the line first, with several drinks to gulp, before he starts.

As they leave the line I hear Rupantar say, "10 days and we still have 14 runners." 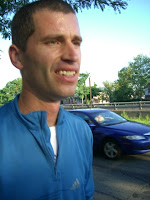 ning with Smarana and am very concerned about his health. I am shocked that he was on the verge of dropping out and yet here is running. I must admit that he shows no obvious discomfort, but clearly he is struggling more than usual.

He tells me how glad he is to be here for the 7th time. We have talked only briefly during past races about his running, and I am interested in his experiences, and how he got to be such a regular at the 3100 mile race. He tells me that his first multi day race was a 6 day event. He tells me, "it was so easy." 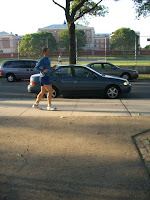 He says this easy introduction to the world of multiday running came with some serious consequences. He says that because he did so well he forgot about gratitude and from this he learned about its importance the hard way. He says, that over the many races he has run, he has learned again and again, the importance of humility, and to appreciate other runners in the race. 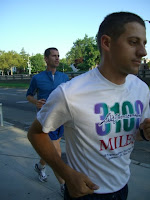 He said another important thing is to gradually free yourself of your expectations. A runner in these races has to have flexibility and adjust to another goal should the first plan fall through. He says that in the beginning of his racing career he was arrogant. When it came to his first 700 mile race in 1994 he felt, "I had a fire to do it. I had no experience, I just did it." 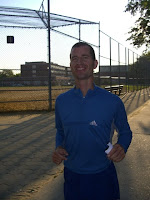 He says that over time he got smarter in his approach to racing. He saw the futility in trying too hard and suffering. He says in the beginning he felt, "more pain more progress." Gradually though he changed his attitude. He knew that in the long run this kind of approach would just break him down altogether.

He tells me how powerful thoughts are. If you can approach the race with joy, ultimately you can be more successful than if you push mentally. He says this kind of mental approach will just lead to a crash, which he laughs as he describes to me as, "a computer system error." 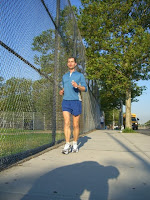 He has had so many incredible experiences over the years, at this race, it is obviously difficult to select stories and experiences that are more important than others. In 2002 he tells me he started off fast and with 700 miles to go he got an infection in his leg. Miraculously he completed the race anyway, and calls the experience, "it was a gift, I was really grateful." Clearly a year when he felt he transcended his physical limitations.

He says that over the years he feels he has been getting better at running the race on all levels. Last year he had perhaps his most significant rac

e of all when he did a personal best and set an Austrian record for the distance. He beams as he recounts how it came about. Apparently when Sri Chinmoy heard that it was in possible range for him to break the record, he said, " Tell Smarana he has to break the Austrian record." His final time was 48 days and 4 hours, surpassing his best by 9 hours. 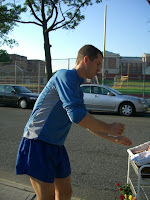 He said that when he heard what his Guru said he felt he was having the ultimate experience. "Everything is given to you, you just have to do it. It was a nice feeling I felt as though I was just being dragged around. When Guru says something, he gives you the capacity." He is overjoyed in describing this to me. He adds, "We know this in theory, but this was tangible, this wa 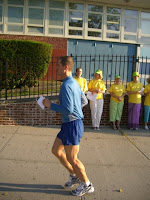 He tells me that this attitude of surrender allows all people to accomplish more. If one can break the normal way of thinking and acting so much more is possible. Transcendence becomes not just possible then, but inevitable.

any hesitation to come here when he knew that Sri Chinmoy would never again pass by him in his little red car. He tells me, that of course he misses him, but that his experience of his Guru still being here is so vivid. He said the experience became so intense at one point on the 3rd day that he had tears coming down his cheeks. "In the subtle world of the race, Guru is here"

He tells me that in our day to day life we make our problems so significant. They bind and constrict and hold us. He said that while he runs here, this kind of negativity, when it can be let go of, appears as false and totally insignificant in the cont 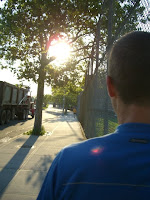 ext of just trying to complete 3100 miles. He says this lesson is valuable when you then come back into the regular world. He tells me with a smile, that he has a job as a manager of a business and when he comes here here he escapes the pressure of his job there. We both laugh at this

We get separated for a short while, and I get a chance to ask fellow Austrian Diganta what qualities Smarana has that make him successful at this race. He tells me, "He is sharp." I ask him what that means and he describes that it means he keeps a very tight schedule. If he were to forget something at his table he would never go back to get it. A short while later I catch up with him once again and I tell him this and he laughs. He describes his approach, in that unlike others, he has only one speed. He has to remain consistent and try and do 108 - 120 laps a day. This means he says, that he really does watch the seconds. If he losses 10 seconds every lap, over 5600 laps, it really adds up. He laughs easily though and says, "You can't push too much, you have to find a balance." 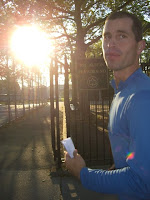 He tells me that Sri Chinmoy gave him his name in 2004 after completing the race that year. He says it means, "Aspiration Heart that sleeplessly remembers the name of the Absolute Supreme."


I come back in the early evening and we run a couple of more laps. He is smiling and running comfortably and I am surprised. I remind him that just a few hours earlier he had spoken about dropping out and now he seem to be running effortlessly. He shrugs, as if to say, "we can never figure this race out, even if we try.


He tells me his goal this year is to transcend himself. He speculates that perhaps at the beginning of the race he may have pushed too hard, which led to his overnight physical problems. Nonetheless, "The goal is here, I have to feel it."
.

Posted by Utpal Marshall at 5:31 PM