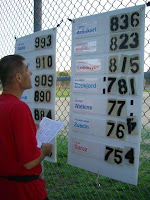 Two weeks ago today, the 3100 mile race started here on this Queens New York sidewalk. If each of us looked back, at our own lives, over that same time, we would be hard pressed to account for all the things that we had done or achieved. The outer progress, of each of the 14 runners, is demonstrated by the plastic numbers Zeljko is placing on the score board, beside each of their names, on this bright Sunday morning. What they have accomplished within themselves, is not for our eyes to see, but only for their hearts alone to treasure. 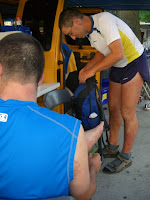 ho was forced to leave the race yesterday morning, due to his skin condition, was able to come back only at 7pm last night. He went to one hospital, then a Doctor, and finally a second hospital to meet with someone who could identify and treat his condition. He tells me he was diagnosed with Contact Dermitosis. It is caused by a wrong interaction, between sunblock, and the sun's radiation. He says at the last hospital, North Shore they were very supportive, and treated him with steroids and steroid creams. They told him it was alright to continue to run. 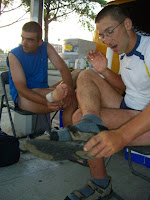 What this few hour loss of time on the course means is that he has fallen from second place to 6th. His total mileage for the day was just over 20 miles, when normally he was able to run over 65. He does not feel sorry for himself, he has come this morning, ready to run. This is what running the 3100 is all about. 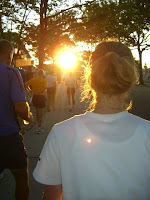 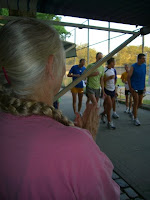 Today will be hot and humid once again.

Suprabha tells me that when she is at home before coming to the race she really feels her tiredness. But once she arrives, the world of possibility opens for her, and she can start the day. 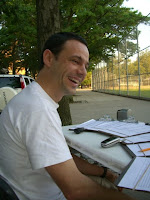 Elmar, a music teacher from Innsbruck, is back to help out. He has been a fixture here for many years. When his school year is over he comes to New York. 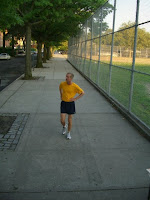 Then, what can you say about Asprihanal. In an hour he will complete his first 1000 miles. The gap between him and the next runner will widen today to more than 100 miles. When you see him run, you see magic in his footsteps, as if he barley touches the same hard concrete that all the others have to pound. 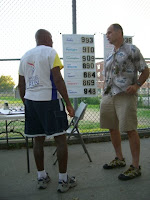 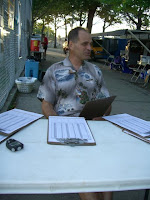 There are lots of mundane practical things that have to take place here to make things run smoothly. Like count the laps. A counter has not shown up, so the job goes to the race director, who soon has to go and do something else. This means ever helpful Vajra, will sit in, until they arrive. 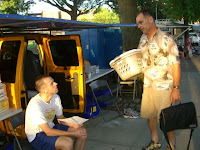 Rupantar gives instructions to a helper before heading off to pick up the first snack of the day, which should be done at 6:15. 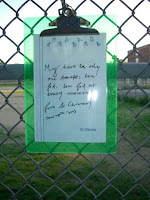 My heart has only one task:
Love God,
Love God at every moment
Guru Sri Chinmoy 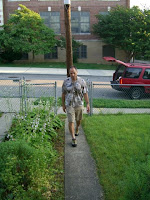 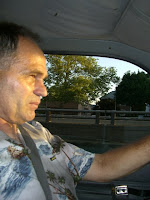 A house, near by the course, has been rented by the Sri Chinmoy marathon team, to help prepare food for the runners. Many trips are made each day back and forth. 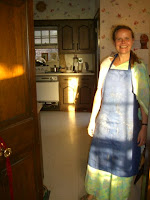 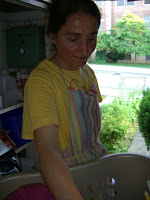 Nirjharini has been volunteering to cook full time for 5 years now. She also has 3 helpers. I ask her about her cooking background and she admits that she has had no professional experience but that, "I always loved cooking. Guru rediscovered it in me." 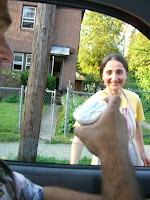 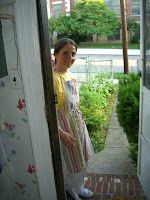 The shifts start at the house at 5:30 and can continue till 8 or even 9:30 in the evening, depending on how much there is to do.

Husniye is the only one else with her this morning. The snack they have prepared, which is not breakfast is, muesli, warm bread, oatmeal, coffee, hot water, and yogurt.

A special cup is brought to the car just before Rupantar drives off. 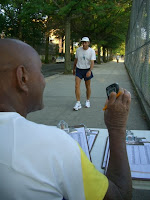 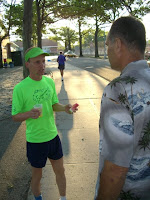 Back at the race Vajra is recording Sopan's laps. Rupantar is reminding Ananda Lahari that he needs to speak to Eklanta about his shin splints and get treated. He is still bothered somewhat by them and is only running a little over 40 miles a day.

It is now late afternoon 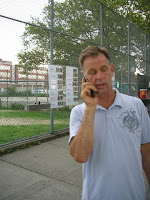 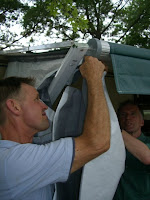 Bipin is getting ready to leave but there is thunder in the air and it looks as though a heavy shower could come at any minute. He is getting phone calls, but wants to make sure all the tarps are in place before he goes. 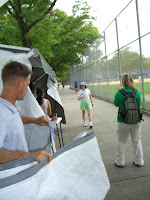 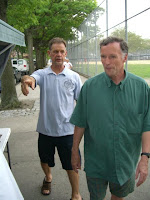 Sundar will replace him as race director for the rest of the afternoon. A job he does most sundays. 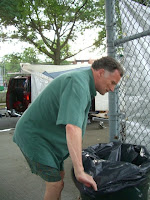 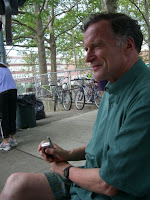 Being the race director has many glamorous perks connected to it, like pouring cups of water and changing the trash bag. I ask Sundar if he ever thought about running long races. Like me, the longest distance he has ever run, is a 50 miler in 1981. He tells me with much satisfaction that once when Sri Chinmoy was leaving a function, he said of him, "Sundar will never have to run these races." Of this he is most grateful. 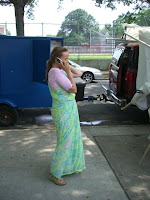 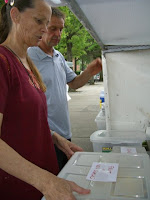 Sushovita has arrived and is wondering why her snack containers are not being used. She exudes both organization and compassion for the runners.

Nirjharini has just come the check on food and found out that the race is out of coffee. Abichal has just shaken the flask and found it empty. She is on the phone right away. Fresh coffee will arrive soon. 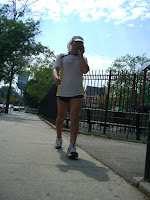 And while yesterday, he was being shuttled from Doctor to Doctor, and away from his beloved race for many hours, Pranab is back today and running strong. No bandages, no complaints, he gets down to what all 14 have to do, run.
Posted by Utpal Marshall at 3:58 PM

Its inspiration to read your daily news from the runner.