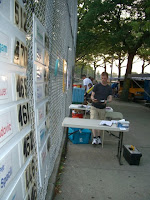 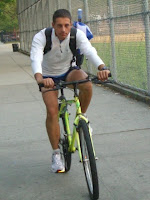 This is Sopan's third 3100 mile race. Like Diganta, he did not come to run in 2007. Now he has returned. I talked with him on this the 8th day of the race about what it means for him to come and run here again. 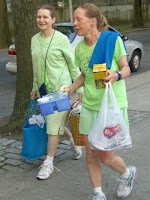 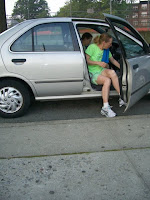 It is a pleasant Sunday morning, much like it was 7 days ago when the runners started. Savita has brought Suprabha to the race this morning 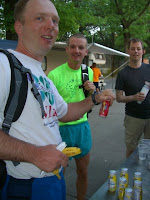 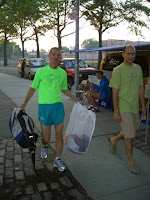 Asprihanal has arrived at the race in a great mood and carrying perhaps, the greatest laundry bag in the world. Lots of ventilation and just the right size. Stutisheel has picked up perhaps the best pre run snack, a yogurt and a banana. 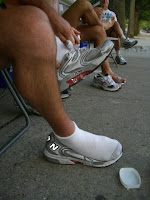 Sometimes it seems to be, all about feet and shoes. For the precious few minutes before the 6 am start those feet have to be made ready to run, at least a total of 2 marathon distances, in one day 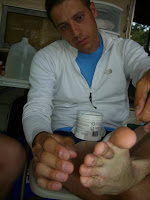 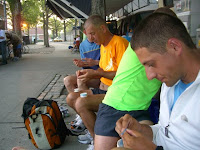 Every runner has so much experience, in taking care of those feet. Sopan has not raced in 2 years, but he is very experienced in foot maintenance. 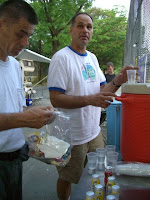 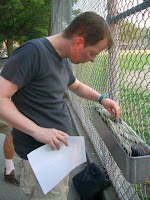 Michael gets the numbers for the board put in order.

Zelko gets some special snack ready, and Rupantar is watching the time. 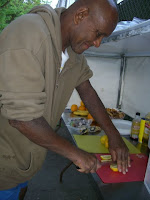 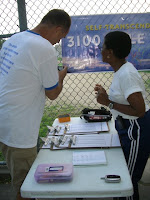 Vajra is getting lemons cut and ready. Rupantar, instructs one of the counters, Karibe how to start the day's stop watch. She is a very experienced 100 meter sprinter. The 3100 mile runners will look slow to her, very slow. 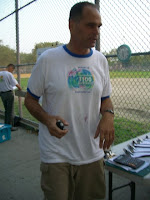 Time is so important for everyone at the race. For the runners, who are trying to cram as many laps into a day as they can, and to the officials who want the runners results to be fair and accurate. 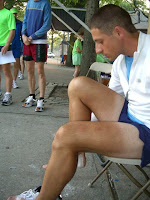 The runners head for the line. Sopan is just about ready. One more shoe to put on and he is there. 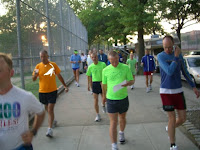 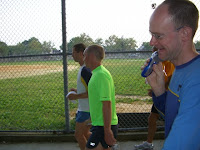 Then it starts. Some looking at the results from the day before and Christopher, giving himself a shave. 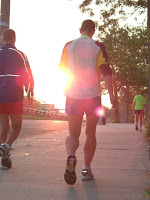 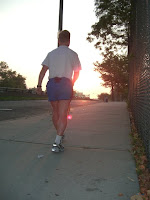 O arms of dawn,
I love your 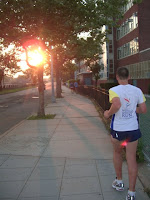 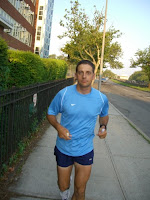 I have started the first lap of the day running with Sopan. We do not talk for quite awhile. The dawn light is breath taking and the air is still and sweet. It occurs to me that from today on, the sun will be rising just a little bit later each day. Sopan is carrying the yesterday's results sheet. I ask him how everybody did. He replies, "Most people did very well, Sopan had a difficult day." 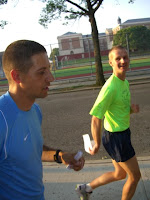 At one point we are also running with Asprihanal. He tells Sopan, that he did well the day before. He encourages him by saying, that running 111 laps was good. He jokes, that when he has a bad day, he does not like to look at the result sheet at all. 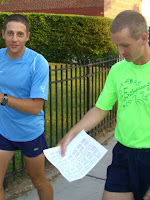 Sopan is speaking, with a touch of congestion in his voice. He says, he feels that his immune system was down. "I got a cold." He feels that the cold, is just a part of his condition being not quite right. That overall, he is a bit weak.

I tell him that it seems interesting that both he and Diganta have such similar experiences at the 3100 mile race. Both started the same year, 2005, ran again in 2006, and then did not come back last year, yet are both here this year. 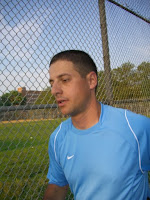 As to why he did not come last year, "We both had problems, I had my own, I was burned out." I decide to ask him about how he got started down this incredible road leading to running in the longest race in the world. He says it started for him in 2000, when he ran in the Spring 6 day race in New York. From then on he tried to come to the two big races each year.

By the time he ran in the Spring race in 2004 he felt very experienced. He tells me that, that year, "It was cold and wet, the conditions were awful." He did well and told himself, that if he did well in the 700 mile race in the fall he would try and apply for the 3100 the following year. As it turned out, he was happy the whole time and says, "I had the best results, I knew I was ready." Sure enough he got the news about the 3100 in 2005, "I was thrilled to be accepted." 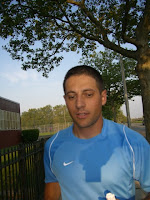 He says that one of the things that helped him during this difficult period was to call his friend Vidyut in San Francisco every day. "He encouraged me tremendously." He also says, that at the end of each day when he went home, he would offer gratitude, that he had made it through the day. Also, he would offer a prayer, that he be granted the capacity to go out the next day and do it all again. From this routine, he found the strength to stay and continue. After this period he says he put in a steady effort of an average of 60.7 miles a day. He finished in 51 days in 2005, and would have done better but that he lost 16 hours with his poor performance in his first 2 weeks at the race.

I ask him how it felt to complete the race. " Guru turned a switch in me, I was now a different person." He says this transformation of his makeup, and his outlook, took some time to adjust to. "The whole experience is so deep." He says that in the end he was delighted with this, and knew that he had no choice but to come back again 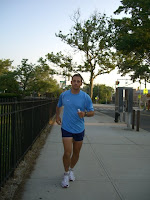 He tells me that running a race like this is so difficult, that during the event you always say, "never again." But that afterwards, you forget all the difficulty you went through, and then can't wait to do it again.

In 2006 race, he was very steady, and ran consistently the entire distance. He transcended himself his second year by running in a time of 50 hours and 13 hours. He tells me that on his final day at the race that year, his life was once again linked to fellow runner Diganta. They both started the last day with the same number of laps to run.

He says that when Sri Chinmoy heard that both would finish, at nearly at the same time, he promised them he would be there for their finish. As it turned out, Diganta finished a little while before him. It was at their joint finishing ceremony, that Sri Chinmoy gave them their spiritual names. He says that Sopan means, "The very fast aspiration heart, climbing the ladder to reach the highest height." He said it was all a very natural experience for him to be sitting next to his Guru. He then sings the song Sri Chinmoy composed for him. 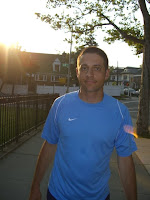 He says that after that, very great high, it took him a long time to recover. He says that it was a year and a half before he felt he was fully back to normal. He says, that he felt some disappointment, when he was not able to run in 2007, last year. He says that Sri Chinmoy fully understood his not returning at the time, but that for his friends, he felt an obligation to them to run. 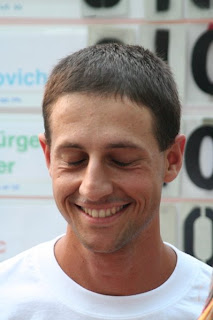 He is clearly delighted to be back despite the passing of Sri Chinmoy in the fall. He tells me, "It is amazing how strong Guru's presence is here. I can look anywhere and feel it." He smiles as he tells me this. As for what will happen over the course of the race, " I try to keep steady. I am stronger. Who knows?"

It's so inspiring to read about Sopan the great! I roomed with him for a while in San Francisco and he has a tremendous silent inner power. Thank you so much for putting up his story. I wish him all the best in this year's race.