They Came to Run 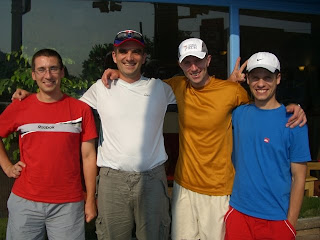 It is just a few days before the start of the 3100 mile race, and I had a chance recently, to have a casual conversation with these 4 young runners from Slovakia and the Czech Republic. Together they represent almost a third of the 14 runners who will be here when the run begins on Sunday. Between them, they have run thousands of miles in competitive running. Three have been in this race before, only Pavol is running for the first time. 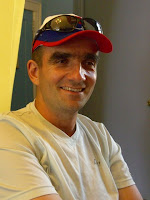 the last 2 years. " For Guru this was something special." He says that he often came to the race in recent years, as much as 4 times a day.

Now that Sri Chinmoy is no longer with us, he tells me how well the 6 & 10 day race in the spring, went nonetheless. He says, "it was amazing at the 10 day." He said that many of Sri Chinmoy's students came out for that race, with the feeling, that being part of it was, "something special." It was for them, an opportunity, to not only honor their teacher, but also prove that his inspiration and vision of self-transcendence would continue.

He says when it comes to the ultra distance events, most don't understand t 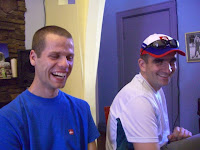 hat it is not about the physical, but rather, "it is about an inner thing." He feels that the 3100 is a natural and important part of his life. He describes the discipline it takes to take on the mind. "Till the end, when you don't give a chance to your mind it will always choose another thing." That, it will never be satisfied, so one has to try and listen to one's heart. 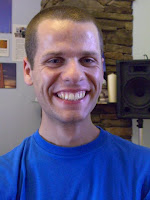 This is 30 year old Petr's, second year at the race and he tells me how much he wanted to run the race last year. When he came to run the 6 & 10 day race last spring, he found out he was accepted for the longer race, and was overjoyed.

This year he came once again to the spring race, but only to help. He had not planned on running the 3100 mile race this year, but when he saw all the inspiration and enthusiasm at the 6 & 10 da

y race, he had a dramatic change of heart. As he looks forward to the many miles ahead of him now, he says, "it will not be easy. Yet he feels, without doubt, it is important for him to accept the challenge. He says, "when you start there is no place for doubt."

He also describes the camaraderie that exists between the runners and which is clearly evident with the group sitting around me at the table in the quiet Panorama coffee shop. "We are family," he says, and the smiles of those around him share this same oneness without question. 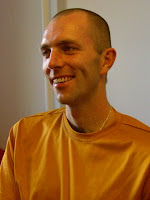 32 year old Pavol tells me, how he spent 20 days last summer helping with the 3100 mile race. "I felt oneness with all the runners and all the people who helped." He first heard about the race 8 years ago, when he became a student of Sri Chinmoy. He says, "Its my dream to run this race."

He tells me how 3 different runners at last years race, told him he should run. He knew then, that this year, he had to come and run. It is still a few days before the start, but he tells me how eager he is to get started. His goal this year is to finish in 51 days. 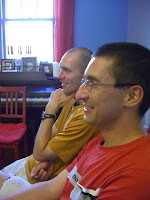 Pranab, also 32 years old, has no hesitation when he tells me, that when he runs in the 3100 mile race, "It is the only time I feel 100% sure that I am doing the right thing." He tells me, "there is intensity in it, you can't take it easy even for one day." He says that in races like the 6&10 day race that the runners can take it easy and be jokers. In this race, you have to have seriousness and dedication. He says that in normal life it is possible to take it easy. What he feels, the important experience is, for him to learn, is to take the dedication he develops in the race, and use it as well, in his day to day spiritual life. 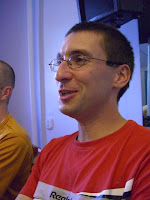 Pranab tells me that he has no goal this year. He relates the story, of how he volunteered to do the race this year, after finishing the race, last year. He says, Sri Chinmoy was at the race at the time, and told the runners, that for other races he could ask people to run them, but that he could not ask, and would not ask anyone to run the 3100.

He told the group, there at the time, that he would accept volunteers. Pranab tells me that he, without hesitation, volunteered himself, and also volunteered Pranjal, who was still running. I turn to Pranjal, and ask him, what 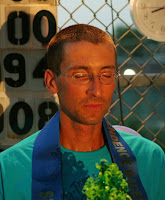 he thought of Pranab volunteering him. He smiles, "of course," he says, "he knew that is what I wanted to do."

Pranab tells me, that on one occasion Sri Chinmoy described him as being, "most serious," when he came to him. He said that he came to him like a hero.

Unlike the outer hero,