The Roof comes Down 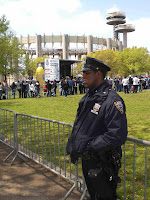 What a difference a day makes. On this warm bright Sunday, Flushing Me 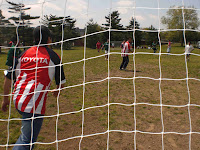 adow park pulses with the throb and beat of the Cinco de Mayo celebration. Hundreds of Mexican American families are gathered for a free open air concert and practically every where you look are picnics and sports being played on every available patch of green. 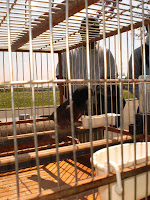 It is a large park, and as you move away from the music on the portable stage, and then head over the Grand Central, the cricketers are gathered there. Today, they are mostly from the Caribbean. These men aren't able to play their game because there is no room. One has brought a Bull finch named Mandy. He tells me that Mandy likes to watch cricket. He gets very animated when the game is on. I wonder if he might be more interested in tennis when the US open comes near by in August. 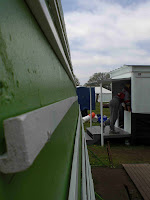 At the race site, Bipin's crew have been hard at it since early this morning. The score board is now empty. 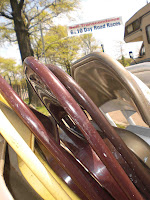 The chairs are all stacked and waiting to be loaded. 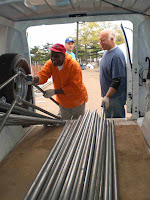 All the pipes that went into making the tents are being disassembled and put into the van to be carried away. 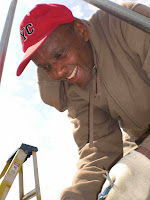 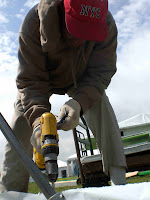 Vajra, who seems to work on every project in the area is taking apart some of the prefabricated floors. 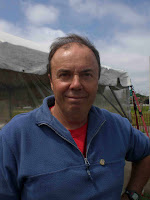 Nick is telling me about his work on the camp's electrical system. He admits that he is no expert on electricity. He says, "I had to figure it all out." I asked if he had any hesitation about taking on this responsibility, and he admits, " I had to say a few Supremes and then set into it." 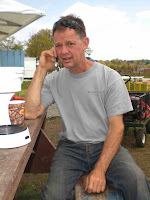 Bipin the crew chief oversees with an experienced eye 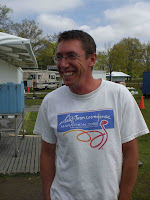 Aaron likes to joke, and he says to me, "If someone said we should do it all again, we would with a smile, and gladly." 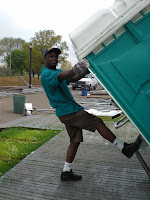 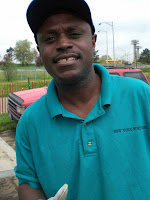 Louis is here this morning picking up the portable toilets. He tells me that he works gladly 8 days a week. Usually he drops the units off on Saturday and picks them up again on Sunday. He admits he likes the dropping off part more then the pick up. He tells me, that he has been to the race here before. He says confidently, "there will be more people here next year, I know it." 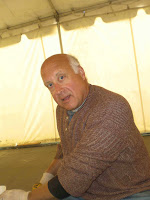 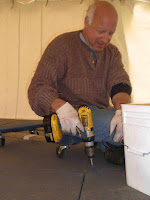 weeks. He tells me that he did the grave yard shift the first 2 nights. He has come up with a low portable cart in order to help remove screws from the floor. He says, "its my invention, it works pretty good." He is happy with how the race went on this year and the numbers of people who turned up including first time runners. 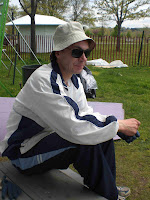 I am amazed to find Michal Petricek from the Czech Republic here. Yesterday he finished the 6 day race with 282 miles. He has bettered his previous best of 277 miles by 5. He tells me that for him the race is spiritually essential. "Crucial things happen after these races," he says. These experiences he claims would not come about unless he ran. He also feels that he is not a real runner as such, but that what happens during this event for him is all about the inner reward that follows.

He tells me about the head injury he had in 2005 on his way out to the 10 day race. It required stitches, so it was impossible for him to start the 10 day race and he was discouraged from considering entering the 6 day event as well. He however got permission to do so and says that the experience was, 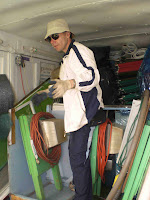 "great." There was no problem with his head whatsoever.

He says that he has a very special spot for himself on the course. He recounts how in 2004 he was running along in his own world when he became aware of Sri Chinmoy following behind him in a small electric cart. He was shocked to see him there and delighted. Ever since then when he passes that location on the course he gets tremendous inspiration and joy. 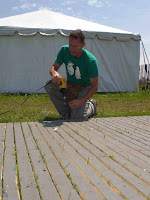 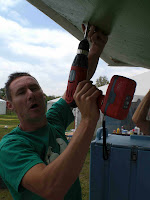 a great formula particularly since the take down may just be the most thankless part of the whole race planning.

Now we have come full circle. We started with a roof going up, and now we see it begin to come down. 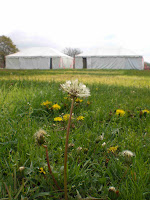 Utpal,
Great joy and happiness I received reading and watching accounts of the two races. I trained, but in the end could not come to the event. Thanks to your inspiring work I definitely have my heart set on being there next year. If not running - then helping!
Thank you and Best Wishes to All
Daulot Fountain, Seattle

Dear Utpal,
I just wanted to tell that I really appreciate your posts about this race. They made us closer to this special event. Thank you very much.