Near and Yet So Far 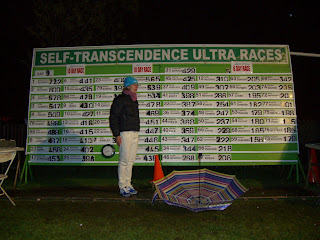 There is less than 48 hours, before a bell will be rung, signaling that the race will then be finally over. This means just 2 more nights and then one final push till 12 noon on Saturday. Many have found their groove and are oblivious to time, to aches, and to fatigue that lingers, always at your shoulder like a hungry cat, waiting to pounce.
Others just push on, through the pain, to a goal, growing ever more sweetly near. 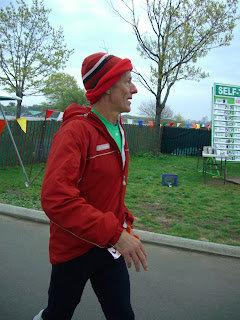 Mark Dorion, a teacher from El Paso Texas, is here for the 4 th year in a row, to the Self-Transcendence races. I am walking with Mark to a rental van to meet his family who have come to support him run, the last 2 days of the race. This is wife Helen's, first visit to a Self Transcendence race . He is wet from the constant drizzle and the spurts of rain that have been threatening, for the past hour. He tells me of a new practical expression that he feels is useful at th 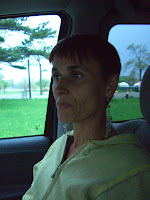 is moment, "kill 4 birds with one stone."

In the van are his wife Helen and 2 small kids, Toby and Amalia. She describes, showing up late last night at the village with her children and getting a familiar greeting as if she was with old friends. She was not too surprised at this, she says, at this expression of warmth and hospitality. She has learned much about the marathon team over the years, as Mark has also competed in 10 other Sri Chinmoy marathon team events and has written about his experiences.

She tells me that just 5 weeks ago she went through some serious medical health issues. The family circled the wagons and dealt with its challenge. Mark's training went by the wayside and he was not sure if he would come. It then became clear that Helen's health was well enough, that he would be comfortable leaving her at home. He called the race director to confirm that indeed he would come but unfortunately not be able to bring his family as he had hoped. He tells me that he was told, "If your family can't make it, you also have a family here." Helen describes, of Mark's love of running, "It's his thing, he has a lot of enthusiasm for it."

They talk at length about what makes these races work so well and why runners keep coming back. The term, sense of family is repeated again, as are attention to detail. They say that this idea of Self Transcendence carries over into other aspects of their lives. Helen who creates jewelery, describes the repetitive act, involved in her work, as also having a self transcendent aspect. She points to the intricate detailing of her earrings.

They also relate to the sense of giving and of service. That, in an event like this, little can be really achieved if you come only for your own reward. They say, "you have to give to make it work." Helen says, as she gestures out the window to the runners passing by, " I can see why people keep coming back.

I ask Mark and Helen what is their impression of Sri Chinmoy. They are impressed that he was able to create such an event as this race. They feel that he was able to bring people together, and of course, it is still going on. Mark tells me of a personal experience that happened to him last year when he had returned to New Y 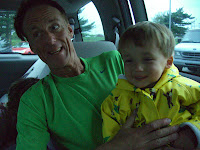 ork in the summer to visit the 3100 mile race. He had just run in the local 2 mile race and as he was standing on the sidewalk, the car carrying Sri Chinmoy came past him and stopped. The passenger window opened, and Sri Chinmoy reached out with a banana in his hand to give to him. Mark tells me how touched he was that he had been recognized and offered this fruit. He said, as he received the banana, "thank you." What touched him was that Sri Chinmoy said back to him, "thank you, thank you." With emphasis on the you.


A collection of poems recited by runners 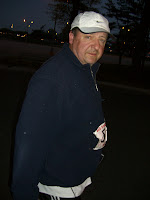 Roman tells me that this is his 6th year in a row, in the 6 day 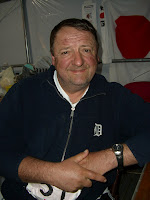 race. Roman is famous for taking time off from the race and going to watch the Yankees play baseball. He tells me that he will going to a game, but it will be after the race ends on Saturday. I ask why he keeps coming back, and he tells me, "Its a vacation for me, its the best service." He describes all the aspects of the course facilities, the housing, and medical, and so on. "I have no reason to leave." He feels that what he accomplishes here is really something for him. Something that the "average Joe" cannot do or even 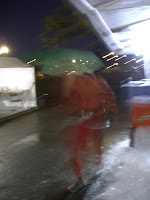 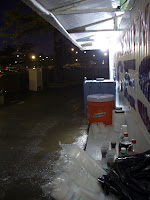 The threatening rains, now make good on their threats. It does not come down like it will stay long and heavy, but it still makes the going tough. The forecast is predicting rain and showers on through the weekend. 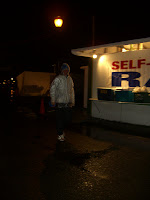 People start to cover up. The wet spots on the dips in the road threaten to expand into puddles. This could be Dipali on the left.

76 year old Sam Soccoli, who is on his way to setting an American, if not world record, in the 6 day race, is joined this evening by his son Jim. His wife Emma has been with him all the way and a cheerful supporter of his effort from day one. Jim, 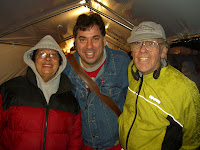 who is celebrating a birthday has brought his wife and son. They have just sung happy birthday and are handing out generous slices of cake. Jim, is a little surprised at his parents interest in distant running. He says of his parents fitness quest, "it sure beats sitting on the coach." He appreciates the dedication his Dad takes to do it.


“ Man and God are eternally one. Like God, man is infinite; like man, God is finite. There is no yawning gulf between man and God. Man is the God of tomorrow; God, the man of yesterday and today.”

Posted by Utpal Marshall at 8:03 PM

I eagerly look at these race reports every day and feel a part of the event even though I'm miles away. Thank you for bringing it so close.

great coverage of then event! thanks so much for taking the time to make these posts!

Thanks so much for taking the time to post the reports. I too look forward to them. My friend and I came down for the first 24 hours to support our great friend John Geesler but had to leave and get to work. Your reports do a very nice job to help us feel like we're "almost" there to watch the race. Thank You!!!!!

This poem-video is in itself a self-transcendence-achievement. People live it. Man has become a poem-torch bearer.