The Goal Beckons Me

Tirtha's name means pilgrimage, and after completing just 24 hours of this race, she has been running longer and further than she has ever run before. She is happy to have undertaken this journey. By tomorrow at noon, she will have traveled 500 miles, if not more. She tells me that she has had, "absolutely beautiful experiences." She smiles as she tells me that every day there has been something positive and meaningful that has happened to her.

But she is frank, like nearly all the runners,when asked about it, "The weath 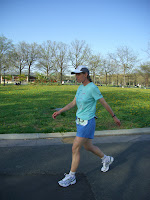 er did not make life easier." She tells me that on her 5th day she felt as though she was flying and how much more difficult the days have been since then, with the rain and the cold. I will not know until much later, but when I check her mileage, on the day she thought she flew, she ran 42 miles. In the last 24 hours she has run 5 miles further with 47.

There are many things happening, to all these runners, to their physical, their mental, and their spiritual. When one moment seems, somehow profound, something quite different may be revealing itself on the score board, and vice versa. My last question to her as she heads off the one mile loop for a break. I wonder if this race is 'her' pilgrimage. She smiles and laughs in a weary worldliness sort of way, "this is just part of the Pilgrimage." 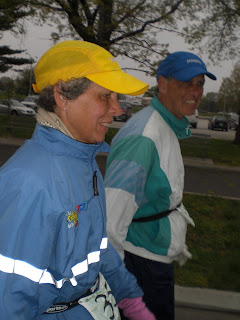 Don and Marion Landry are also further along the multi day distance road, then they have ever run before. Previously the furthest they had run was 6 days and now they are closing in on the final hours of 10. I ask them how they are, and though they appear content, it is clear, that they have been struggling a bit, with the tough conditions. They smile, and tell me, "it has been different this year." Where last year they just could accept the experience for what it was, this year they have had to accept the very real challenge that Marion will most likely break some Canadian Women's distance records. Don is currently in 8th place. 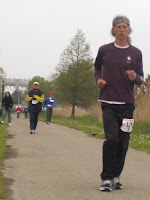 John Geesler has been cheerfully maintaining his lead in the men's 6 day race. He rarely complains and though he saw his chances to make the US men's 24 hour team disappear, he has accepted the challenge of putting in a good effort for 6 days. 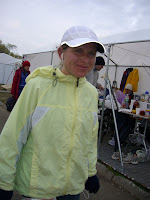 Sunanda Minarikova of the Czech Republic is also in her first multi day race. She has gone from, her longest race being 12 hours to 6 days. She has been running for a few years, but when she saw the distance events, "I wondered how they can do it." For her, as a student of Sri Chinmoy, she tells me that she is aware of much inner concern, love and compassion as she runs on the course here. She calls the atmosphere here, like a family. She feels that she is receiving inner strength and inspiration to do what she outwardly she feels would be impossible for her to do normally. "I could not do it, day after day." 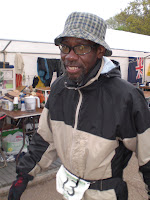 This is Fred Davis's second 10 day race here in Flushing Meadow. He tells me, "I like the race, the friendliness, all that good stuff."He feels that the inclement weather also made the going more difficult. He felt that just changing clothes made him loose at least 20 miles. He is however very cheerful, and I do not know for sure his schedule, but no matter what time of the day or night I have been here, I have seen him out on the course. 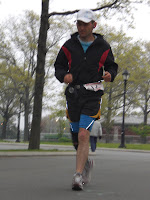 He tells me amusingly, that before last years race he was in the worst shape of his life. I ask him what kind of shape he was in before this race and he says, "the second worse shape." He also tells me, that feels a close connection to this race. He says, that before he even ran a step last year, "at the line I knew I liked this race and I said to myself, I am coming back." I ask him further what he gets out of all this. He tells me, "You have to believe in yourself to do this." 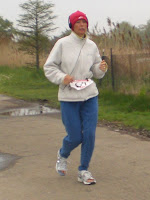 Dipali is running very well. She is slightly behind her 5 day totals from last year, but there is a very real possibility that she will be the overall winner of the 6 day race at noon tomorrow. 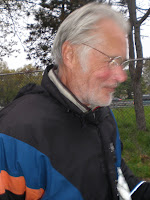 Don Winkley is in an upbeat mood when I speak with him. A condition, as far as I can tell that seems to last 24 hours a day in his case. I ask him what he wanted to accomplish here. He tells me simply, "my goal was to be here and to participate." I am curious as to what he has got out of this years race. He tells me, "I will go home stronger than when I came, extremely strong." This he says with real enthusiasm. 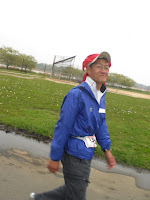 Katsuhiro smiles for me each time I take his picture. He describes how he has received encouraging messages from his Japanese friends. I am having some difficulty understanding him, but I believe that they have reminded him to be positive, even though the pain in his shin has severely slowed down his speed and limited his mileage. He tells me, "I am not so good but I'm smiling." 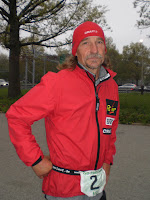 Achim Heukemes from Germany is a very experienced distance runner. He confesses to me that he speaks very limited English. He has been averaging a little over 70 miles a day for the past 10 days. He seems to be very comfortably in third place, though I suspect he will not take much rest on this his last night. 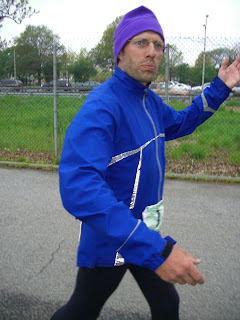 I have been, fascinated by Madhupran's experience here, since day one. I had spent time with him, 2 years ago making a short film, when he set a world record in the 3100 mile race. Then he said, that he would not do any more multi day races and yet he has come back to New York, he said, to honor Sri Chinmoy.

He will easily win this years 10 day race. He tells me, that for now, "My goal is 800 miles, and then we see." I ask him about the joy he wanted to have here and he smiles. The situation here with the weather he says was extreme. He laughs as he says, "I must learn joy." He describes, that at times, he lost sight of his inner life.

He said at f 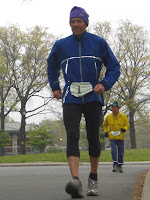 irst, he blamed the wet and the cold. He describes how he felt it took his power and made him feel like an empty cup. But for even someone as experienced in competition as he, he says, "there is a lot of learning in this race." I remind him that his wife said to him that he mustn't compete here. That he should only run for joy. He is amused at this, and tells me, that the vision he had of Sri Chinmoy before coming here was also very clear in that as well. That he should not run in a competitive way. He feels now he says that the injury he sustained from his fall was due to being out of sync with his inner purpose in being here. Because it was not a direct running related injury, a fall such as he had was a sign to be aware of where he needed to be, with his consciousness.

He says that what he also forgot, that when it comes to nature, you can either be intimidated and beaten down by it, or allow it to give you strength and charge you with its energy. As we talk, he seems to me like a man, who has had some deep and powerful insights into his life and gained a much clearer perspective on his goals, both inner and outer. Tomorrow, he will have accumulated many miles, which will be stuck on to the score board with velcro tape. In his heart will be a much different score, one that only his heart can recognize and appreciate. 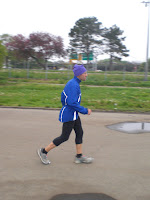