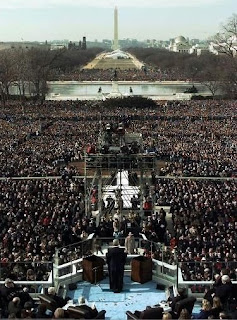 This morning dawned cold, bright and full of promise. Most people, not just in America, but also around the world have looked forward with tremendous anticipation to this January 20th inauguration day. For many it was collectively seen as a defining moment of change and transformation. That where there had previously been despair and disappointment in humanity's fading dreams. Now would emerge afresh and anew an extraordinary budding hope in all people's hearts and lives. That perhaps the world was at last now on track for a long awaited more fulfilling future.

Of course on any great day of joy in the world there will always be somewhere stories of quite a different nature. At every minute in one place somebody is celebrating with a smile and in some other place a tragedy will unfold that cannot help but bring forth tears. My own little world of Jamaica Queens was rocked this morning with the sad news that a good friend of mine Sudhir had passed this morning after a lengthy illness. 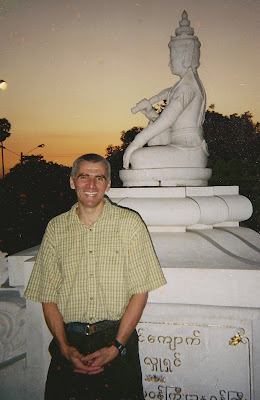 It was not unexpected. All his near and dear ones had seen him gradually fading over the last few years and more rapidly over the past few months. In one of the more remarkable small miracles of life he, who loved travel, made one last trip to Thailand on his own. His return home though, less than a month ago, was a mighty challenge for both his waning energy and usually buoyant spirits.

I took this picture in Rangoon some years ago. We had just spent the gentle dusk hours circling the Schwedegon pagoda. It was a time of sweet incense, tinkling bells, and all embracing sense of peace.

His name Sudhir, given to him by our spiritual teacher Sri Chinmoy, means 'Inner Poise.' For me this time together in Burma was a unique and defining moment with a true brother-friend. Yet I know many others who also found in him a similar deep and inner bond with this stalwart son of Scotland. He thrived on hard work and yet for me he consistently possessed a unique knack of piercing even my darkest moods and with a bright quip or bemused look make me laugh. His capacity for humor was second to none. His ability to perform comedy is now legendary, first with his friend Ian (Harsha) Prior, and then with the Swanson brother troupe. 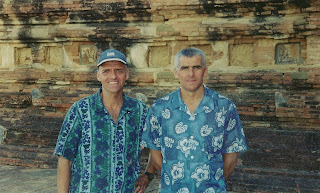 Later on that same Burma trip we toured the plains of Bagan with its almost countless temples dedicated to Lord Buddha.

There have been many times in my life when visitors to New York would mistake me for him and call me by his name. I took this as a Supreme compliment because in him I saw more wit and humor on a daily basis than I could muster in a life time. I have had this picture on my refrigerator for years. In the coming days and weeks it cannot help but remind me that I have lost a true friend and spiritual brother.

The following is a question he once asked Sri Chinmoy

Sudhir: What is your favourite joke from India?

Sri Chinmoy: My favourite Indian joke is what happened the first day I came down from the highest type of samadhi. I forgot my name. I was trying to think of my name, but I couldn't remember it. Then it came to my mind that one of my school notebooks had my name on it. So I looked at the cover of the notebook and found my name. When I came down from that consciousness the second and third time, I had to ask my friends what my name was. My friends were my greatest admirers. They knew my realisation, so they didn't cut jokes with me.

Excerpt from Smile Of The Beyond by Sri Chinmoy.


He had many friends and loved ones. Though a private person by nature he had a gentle and caring way, of taking a sincere interest in the trials and tribulations of others. His astonishing capacity at recitation never ceased to amaze me. I often asked him to recite from Shakespeare's Henry the 5th and other poets. 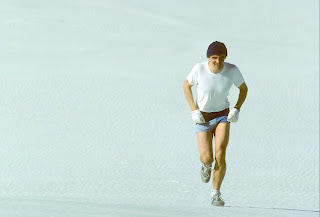 He was not one to over sentimentalize though at the same time he was not reluctant to empathize with others. For me Sudhir was, for the more than 30 years I knew him, a man of incredible self discipline and dedication to work and sport. When his knees failed him in his favourite sport running he instead took up the challenge of cycling and swimming.

All those who knew and loved Sudhir will miss him in the upcoming weeks and months. If there is any consolation in his passing is that we can take some small measure of comfort that his suffering has now been released and exchanged for peace. Today the world both gained and lost something significant. There is perhaps a transformational new President in Washington but in Queens we have lost a treasured loved one.

The journey lying before America and the world today has never looked brighter. For all who believe in the soul's reality and its sacred divine promise, Sudhir has returned home once again. His private journey guided by the creator who loves all in his creation equally, no matter whether they Smile or Cry. 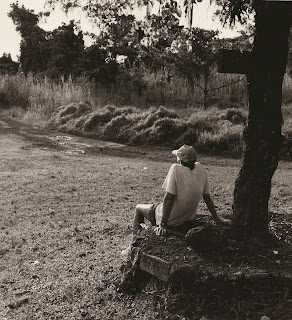 Each day is a new day.

Each new day is a new way

And sit at the Compassion-Feet

Of your Lord Supreme.

Humor and courage...always a friend to me.

One of a kind, soulful, honest, humble and most caring friend. He offered joy and asked for little.

He was my house guest in the 70s and he turned a 2 week stay into 9 months. With his friend Ian Prior, he created the Agony Brothers and co-wrote Agony Nada, both parodies of life in the Centre.

Sudhir often rode his bike from Jamaica to Montauk for fun and amazed me with his endurance and enthusiasm.

He was Sri Chinmoy's #1 Road crew guy in the late 70's and maintained one of his first tennis courts.

In his untimely passing, Sudhir is a pioneer and he shall bless us all from afar. His soul is infused with Light.

His spirit shall remain with me and those who loved him.

I shall always recall his life with a grateful smile.

I did not know him. But this loving tribute is surely a faithful rendering and a humble tribute to a dear friend. I was both moved and inspired.

I was not among the fortunate to count him as close friend, still Sudhir has always been of utmost inspiration to me, especially his divine inner poise.

I am sure now he is very, very happy. I hope one day I will be able to meet him again.

We talked of Scotland and the Highlands all the time. Sudhir was a friend with a real gift of comedy. I will miss him.
Pravin

Thank you Utpal for your lovely words and pictures. Breaking this news so tenderly, and still it destroys me today, to have our sweet brother gone. Cursed Death, after so much suffering...... The old song comes to mind:
"Time takes a cigarette,
puts it in your mouth....."

Thank you for this wonderful essay.

I will always remember Sudhir on the stage at PS86 performing a comedic version of Shakespeare.

Always on the edge of a smile.

Thank you for sharing your thoughts and these images of Sudhir. A Paisley boy - I always thought of him as a Scot, but he was and is much more than that. He is an inspiration and a seeker-citizen of the world.
Best wishes.

i am so in awe of my dear brothers and sisters - especially those like sudhir who are so grounded and present and loyal.

Shambhu - i loved your comments - Pradhan, Priyadarshan, Yogaloy - you are all such great souls and Narendra yours is the truest, he made us all "always on the edge of a smile". Just in his and your presence now, i am smiling and smiling..