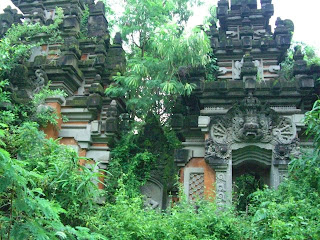 I had been following the path for some time, the one that ran west and skirted the black sand beach. The only sound I could hear on that silent morning was the gentle crash of the sea spilling up across the sand and then swirling back out once again into the Java Sea. 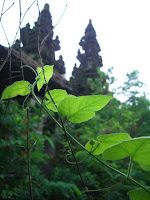 And then it just ended. Stopping abruptly at a small river which flowed thick and brown from the rains that had fallen heavily during the past night. 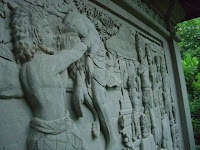 Then I followed a smaller dirt trail that pushed and meandered its way into the tangle and green of a Balinese forest. I hoped to find a bridge that could help me continue my journey westward but instead my path led me to the silent theater. 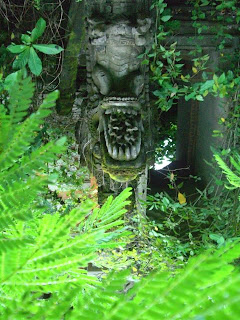 At least I could only assume it had once been a grand and wonderous place. There had obviously once been a great stage but now its floor boards were long gone. It was nature's hand that filled the gap left by man. Vines crept over the space were once young dancers feet had gracefully moved to the haunting melody and rythmn of Balinese Gamalung. 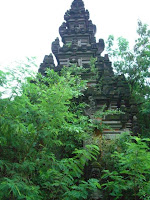 There was no one else there except me and the forest and the haunting memories of those who had once come here and found joy and life. 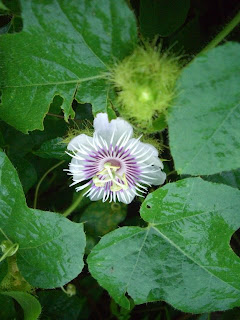 Nature had nearly reclaimed this place that for me had no name and no history. The beauty of the theater was a sad and distant one at best. Nature in its place was providing its own enchantment in the flowers that fell across the space.

Today there was an audience of one lone runner. Nature's performance I will continue to applaud for some time to come. 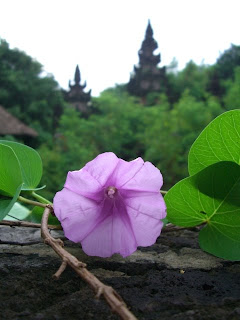 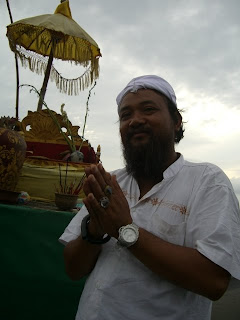 When I emerged from the forest I came upon a small temple where People where making offerings. Each temple no matter how small in Bali seems to thrive with constantly with life. He had placed his flowers on the platform that perched just out of reach of the splashing sea. 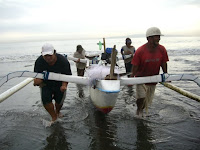 At the same time the dawn fisherman where coming in off the sea with their small catches of fish. Each would help the other drag the boats up across the sand to safe spot just past the reach of the sea. 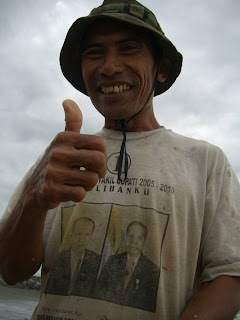 None of the boats seemed to have caught much. A meager harvest at best for the 3 men who had been out with casting nets long before the sun had brought its brightness to the sea. Still all seemed content in their own way. 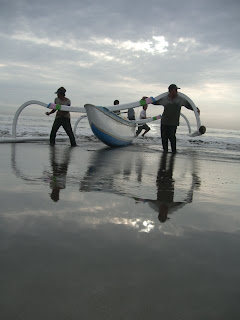 Like all fisherman the work is hard. Just to pull the boat up across the unforgiving sand is not easy. 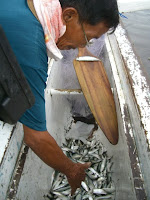 And yet the customers come. Pulling out the fish they want and placing them in small plastic bags. No fresher breakfast can be found, the catch almost still alive with the scent of the sea upon it and the toil of the fisherman right before your eyes. 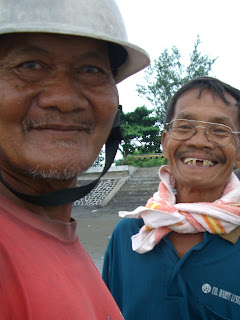 And so this is a fragment of life on a Bali beach. And also a glimpse at the mystery I found in the silent forest, where memories sill linger and nature gradually reclaims what once belonged solely to it.

A man makes an offering to God and the sea offers something back to man
Posted by Utpal Marshall at 6:15 AM