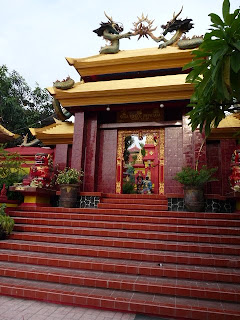 Mario was adamant that the Chinese New Year in Bali would be significant,and worth checking out. Having seen this celebration take place in traditional Chinese cultures in many places I knew it could be interesting and moving. But I thought to myself, "this is a Hindu Muslim culture, how could they possibly have room in their population to celebrate a Confucian Buddhist religious experience as well.

With a little research we found that there was a Chinese temple nearby called Tana Kilap. A taxi dropped us of on a busy highway and the driver pointed us down a quiet lane that did not look too promising. But after 50 meters, the unmistakable sweet scent of incense greeted us and we could see bright red lanterns bobbing in the breeze. 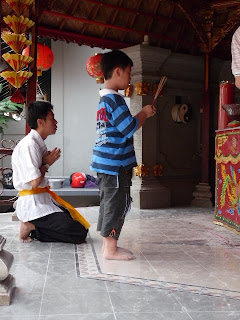 The temple seemed small, but that may have been because there was a steady stream of worshipers. Our group was respectful and the locals who were making a circuit of the complex seemed not to mind our presence on this auspicious day. 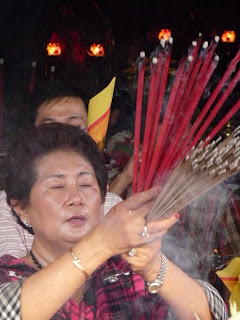 We were given ribbons to wrap around our waist. You could choose either yellow for prosperity or red for good life. The large bundles of incense we were handed were difficult to light but once so, the smoke and sweetness enveloped you like some mystical barrier. 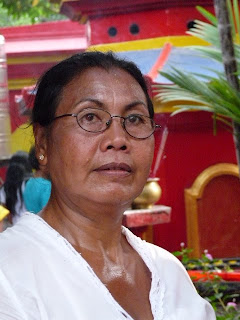 The stations in the temple were clearly marked and if you missed one a helpful smiling attendant would point you in the right direction. Most worshipers lifted the burning incense above their heads and bowed at each place, leaving some sticks in a container now thick with ash.

At the end of the circuit the priest gave her blessings to one and all. 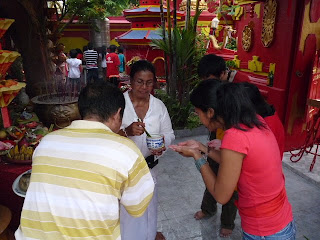 A prayer said, holy water splashed on head and hands and a small amount drunk. Also a yellow paste was applied to the forehead. 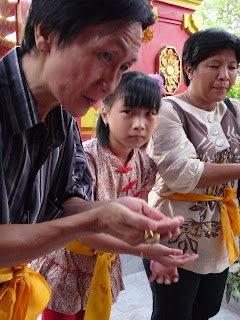 For most this last ritual seemed the most significant. 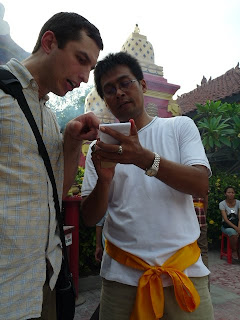 I had been asking if anyone spoke English when quite magically we met the very helpful Iketut Winarta who is an architect. He also wanted me to know that his Chinese name was Liem Tian Xin. His ancestors came to Bali in the 19th century he proudly told me. This temple he explained was a mix of Confucianism and Taoism. Meaning a mix of Buddha from India and Confuscious from China. That like the mix of races that had come together over the centuries in Bali, that also religions as well found ways to mix. I mentioned that the new US president knew something about mixing and he laughed. 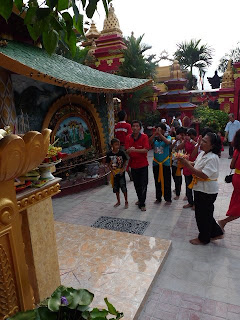 It is the year of the ox. Meaning one in which steady conscious effort is needed in order to succeed. 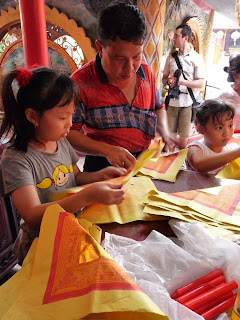 A young boy told me that all the fireworks were used the night before. Today some kids kept busy by folding paper that would later be burned in a big open oven by the worshipers. 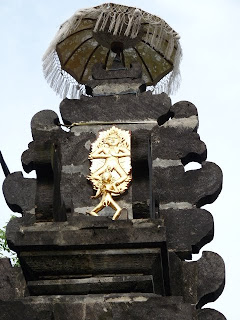 The statues around the temple seemed quite old but well cared for. Each one carried a unique experience in the ritual circling of the grounds. 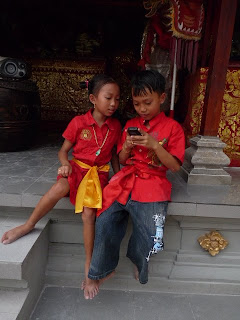 It did not seem out of place for kids to play with electronic games during the time that parents made the slow and thoughtful rounds. 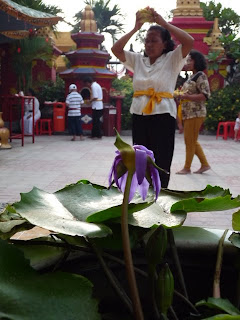 I do not know how long the temple's members would come and pray. A day later the sweet scent of incense still lingers on my clothes and the ash is embedded in parts of my sandals. 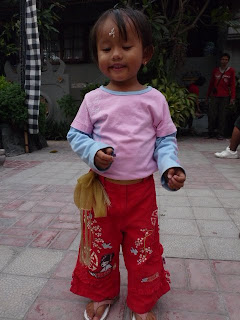 The young faces of Bali. On one day I saw people praying to Shiva with the rising sun. Today I see those celebrating in a sky without a moon that yet signals a new year. 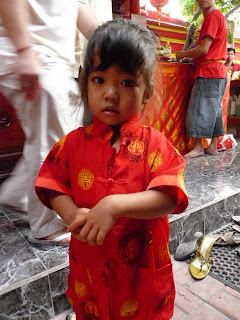 May the beauty of the New Year

May the purity of the New Year

May the simplicity of the New Year

May the intensity of the New Year

May the responsibility of the New Year 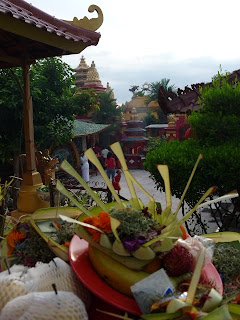 May only the divinity of the New Year

Excerpt from My Sweet Father-Lord, Where Are You? by Sri Chinmoy.
Posted by Utpal Marshall at 10:01 PM