Trying To Be Myself 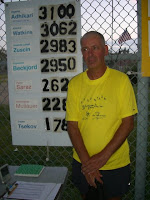 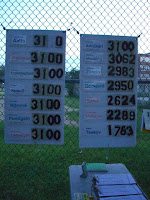 This morning Abichal is asked to stand beside the board. He has passed by it, over the past 54 days, thousands of times. Over the course of the 6 years he has been running the 3100 mile race here, his cumulative circuits of the course comes out to about 33,000 laps.

At about this same time, as he stands patiently, on this rough little patch of Queens sidewalk, huge crowds are entering the Olympic stadium in Beijing, to view world class pageantry and spectacle. The likes of which, the world has probably never seen before. In a few hours after that, the first gold medal, could be very well be awarded, to a 26 year old Chinese girl name Du Li in air rifle competition. She won this same medal 4 years ago in Athens.

This 47 year old man from Pontypool Wales has never won this race or even come close, in any of the 6 years he has run here. When he crosses the finish line today, he will place 9th. The first place finisher already finished the race 10 days ago, and some others, who have completed the distance, have already gone home. At the finish line today waiting for him, will be a bouquet of flowers, a cake, and a gathering of several dozen friends and supporters.

This is not a place for outer victory, at least as most of the world knows it. There is no fame to be gained here. There is no adulation offered, by the curious and fickle humanity. The reward won, on this field of battle cannot be seen or touched. Yet for those who have observed, even briefly, what he has done here. For those who have seen the Himalayan weight of his effort, his pain, and his sacrifice, throughout the length and breadth of a New York summer. They can feel and celebrate the inner glory of his achievement. 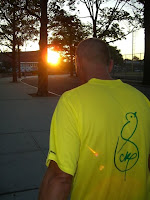 They all know, that Abichal is a champion of extraordinary heights. They know this, because he does not run for himself or for praise or reward of any kind. They see in him one, who runs purely because his Spiritual teacher is inspiring him to do this impossible task. Inspiring him to push his physical to a new and higher goal, and his life of aspiration, to an even greater transcendent reality. He is here only to please God. One can safely imagine, that the Supreme within his very life breath, must be pleased as well with him this day. 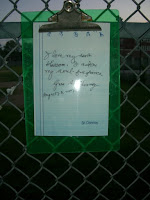 I love my heart blossom.
I adore my soul-fragrance. 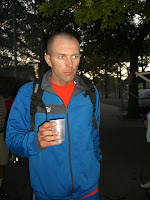 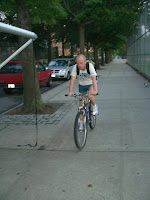 Ananda Lahari ran more miles yesterday than he has run any day since his first 3 days here, 65. He has just 117 miles more to run. 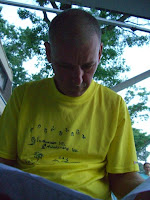 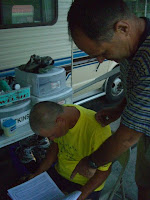 He arrives without fanfare but not without cheer. He appears sober but satisfied. The few who are gathered here this morning know that he will not be here tomorrow. They celebrate as they can and as they must. He starts this day with a certainty that he will transcend all previous efforts at this race. 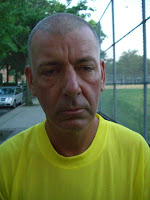 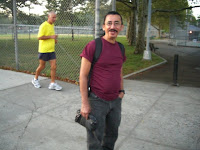 We run around and around the course, he says nothing, and I ask little. He is someplace deep within himself. 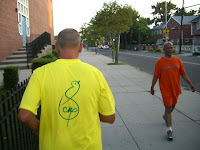 He gives brief but personal acknowledgment to all those figures who passed through his world every day over the course of the summer. 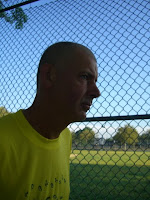 I chatter away from time to time but he does not rise to my verbal bait. I tell him some observations of those who have recently experienced a final day. Some have talked about the experience of working on themselves inwardly. He says of this, "you get more opportunities here, because there is nothing else to do." Of his experience being here, the essence of it for him is, "trying to be myself."

I am curious if he is pleased that he will be breaking his personal record here at the race. He says that he always tries to do this but that breaking his current record is not his goal. He tells me that coming in under 51 days, the race standard, is his only goal here. 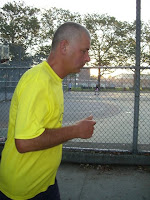 He says also that Sri Chinmoy did not ask him to come here and do the race. He says, "he never asks." At the same time he adds, "I know that he wants me to be here. Only Guru could have got me here this year, and last year as well." 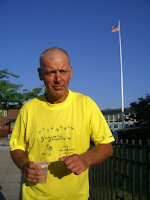 I ask him how he understands this task that he has so readily and willingly taken on now for the past 6 years. He says, "the mind cannot grasp it. The race is bigger than can be conceived."

He adds as well, "I am grateful to Guru for letting me be here, and to be part of this. This is Guru's race." He makes a minute but all encompassing sweep of his hand as he says this. 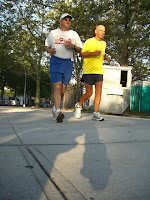 After a while Chanakhya joins us. He has been helping Abichal every year since his first year in 2003. He is a supplier of evening coffee and much more. He gives him the kind of supp 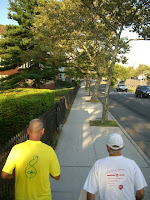 ort that only a knowledgeable distance runner can give. He knows his ups and downs, and just how remarkable strong he really is inside.

Chanakhya will tell me of his friend, "Regardless of what he goes through, he gets the job done." After a while he adds something more, "he gives what he has to give, and each year he comes back and gives more." 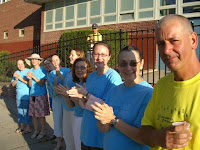 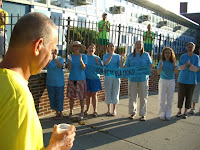 We pass by the Enthusiasm Awakeners and he beams with pleasure. They have helped him and uplifted his spirits since day one. He asks me to take this picture to show his gratitude for their efforts at the race. 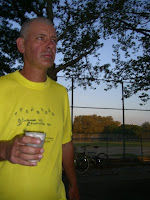 Jigisha tells me later, what his impression is of the 3100 mile race and Abichal's part in it. He says,"This represents something different from personal achievement." He says that he, like all the runners here, are actually carrying Sri Chinmoy's vision. What's more, is that they then act and manifest on this vision by running here. 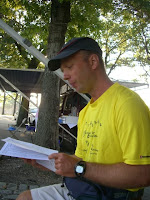 Stutisheel will leave in just a few hours, but comes out one last time before he goes, to support Abichal, and all those still running. Of his own race he says, "I learned almost every lesson I was supposed to learn."

He says that he felt, "Guru came to me in the last 7 laps. Therefore I was the happiest person on earth. This happens only when I please Guru." He called those laps golden. 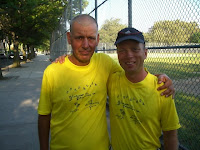 Of Abichal he describes his appreciation of him from his very first race when he came in so unexperienced and Abichal had already run the race. "He supported me like anything," he says. His heart he says is very open. 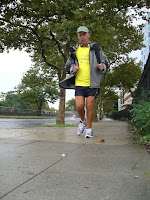 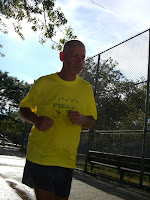 The day goes on. It shows all the capricious faces of a New York summer. At one moment the heavens unleash their fury with wind, rain, lightning, hale and thunder. Abichal digs down and pushes into the worst it can throw at him.

Then just like that, it is sunny once again. 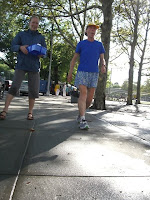 By the end of her day, Suprabha will have less than 100 miles more to go. 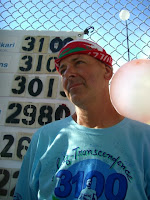 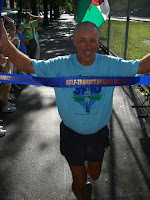 He will proudly carry his Welsh flag to the finish line this day. He will cross over this line in a time of 54 days, 11 hours, and 34 minutes. He will have transcended his previous best time by 16 hours and 21 minutes.


Songs will be sung.


He offers his gratitude to all those who offered so much outwardly, and also, more importantly to, Sri Chinmoy, who gave so much to him inwardly.

In the Battlefield of life
I remain unperturbed
Day and night
I live
Clasping my Lord's feet.

Words from the Abichal song, composed by Sri Chinmoy
Posted by Utpal Marshall at 4:23 PM

Thanks Utpal for listening so profoundly to the messages said and unsaid - for capturing the commonalities and the difference of the various runners in both their inner and outer journeys.

Thanks for connecting those of us further afield with the core of the heart of our New York.