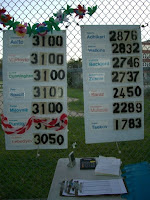 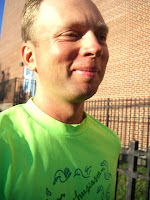 His has been a remarkable journey, this man from Kiev in the Ukraine. Stutisheel Lebedyev began, like all the other runners, so long ago now, way back in June. But the distance his legs have taken him these many weeks, is not nearly as far as his heart has traveled in that same time. There is an expression that goes, "we never walk alone." In his case, it applies more so here to him, than to anyone else. His spiritual teacher, of course, has been an ever constant presence in his inner life. But each step he has taken here, has been aided, coaxed, encouraged, and inspired by his family. Not just at his side, but also in the very real world of his heart. A heart, in which the path forward is not always smooth, but one, which is sunlit nonetheless.
The 3100 mile race is not just the life and breath of Lebedyev clan, it is the soul stirring dream that draws them together and carries them forward on their life's journey. Together, they can travel further than just one life striving alone. Together, they can conquer the impossible. Together, they can and do fulfill, their God promise dream. 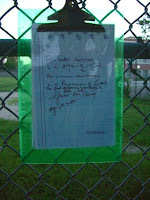 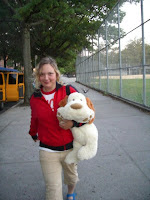 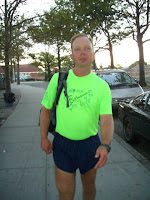 Alakanada arrives carrying her own moral support team. She has spent the last 4 summers here helping her Dad, and is one of those you have to say live and breathe the 3100.

This is her Dad's 5th race in a row. He arrives this morning with just 50 miles to go, and has an impossibly slim chance to beak his record today, only if he runs extremely well. 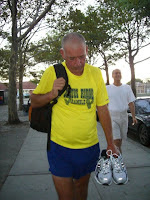 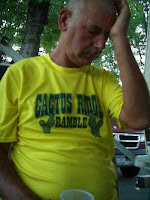 If you want to see what bone weary looks like, Abichal is case in point. He is pursuing his own slim chance at a record. He ran 57 miles yesterday.
He received an email recently, in which someone joked about the holiday he was having here. If a travel agent gave you such a holiday, you could sue them for millions. Make no mistake, at how hard and valiant the journey is being taken by all, who push on and on each day. 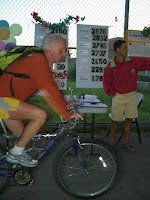 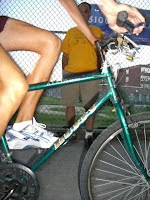 Diganta flashes by, as does Ananda Lahari. Diganta has recognized, that he will need to extend, by a short time, his scheduled New York departure. Ananda Lahari will finish on Sunday, sometime near when Suprabha finishes. 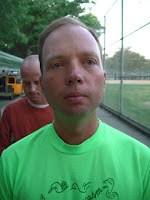 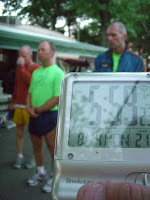 He stands at the starting line for the 5th year, poised, to not just finish the race, but also break his personal record. If he has a terrific day here, he can break it by just a few minutes. If it is, a so so one, he will only be able to say, he completed the race. The 3100 is not just a battle of time and distance. Life throws challenges at the runners from both near and from far. Difficulties that quite often defy, both physical and mental effort to conquer them. Today he will do battle on all fronts, before he reaches the finish line. 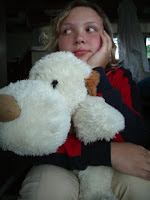 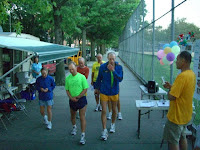 Alakananda will turn 17 in a few days time. She has spent her last 4 summers here, and it can safely be said, she has done a lot of growing up here. In helping her Dad, along with her Mom, she has had many powerful as well as challenging experiences here as well. Since her Mom left, to go back home, she has been here as much as 18 hours a day. She says, "you get tired, they get tired. If you make a mistake, it is hard for them." She has ha 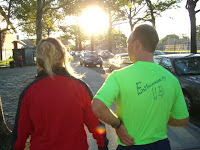 d many intimate and sweet experiences with Sri Chinmoy here over the years. On her birthday last year, she was even invited to ride in his car, as he drove around the block. She is amazingly mature in her spiritual outlook. She says, "the progress you make is up to Guru." 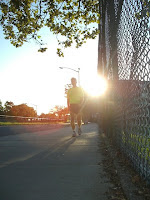 to do this race. "I wouldn't survive,"he says,"on 5 hours sleep a night." It appears that his, and his family's commitment to the race, is all consuming and universal. He describes the 3100, "It is a different world. You feel it is home." He feels that all who get involved or even come by just to look are inspired by it. "People come by to breathe in Guru's energy." He has felt his Spiritual teacher's inspiration and energy very consistently throughout the race but also admits, "I will miss him at the finish." In other years, he felt that if he was having any problems, just the sight of him going by in his car would change everything for him. "He would smile, and the problems would go away." 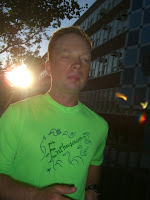 who is experiencing the race with, and through his family, he also identifies closely with the other runners. Six have already completed the race. He says, "the finish of my friends is more intense for me than mine." He celebrates their achievement, and feels, "Guru is proud of them." As for himself, on this his last day, he says, "several days ago I felt the smell of the finish."

But he has grown to understand how impermanent the finish of this race is. After you have struggled so long and so hard, and then like that, it is over. He says, "suddenly I realize how fleeting it is. You are on top, then it is gone. It is fleeting time. I want to claim something solid."

He recites for me a poem of Sri Chinmoys' that he recently read.

He says that the race, puts many things of his personal and spiritual life into 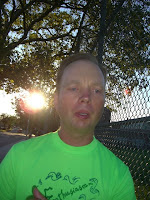 perspective. For him, there is only one thing, that becomes clearer and more important to a spiritual seeker. "Oneness with God, we can claim as our own." He feels that this realization for him, has helped him tremendously. He feels that it also facilitates a very real oneness with his Guru, and in so doing, allows him to please him in his own way.

He tells me of an experience he had with Sri Chinmoy that was very inspiring for him. It was after a 3100 mile race, and he asked him, "when you are experiencing an uplifting thing. How do you stop time, in order to appreciate it even more?" Sri Chinmoy told him that when one wanted to do this, they should go to their heart, as deep as possible and offer gratitude. The experience will go on, and time will stop." Stutisheel smiles with delight as he adds, he also said, "very good." For him this is very real and practical advice. He suggests, "if you can claim Guru, as your own, very own, time stops."

He smiles ,as he appears to be looking back over the events and experiences 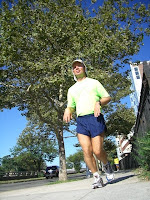 that have taken place, not just this year, but over the past 4 years as well. "Just yesterday, I flew to New York, now I am finishing the 3100. It is unbelievable." He tells me how in 2004 he was having a difficult day with the heat, and at one point was just lying in the grass. He felt an overwhelming love of the race at that moment. He says, "I didn't want to finish. I will be homeless."

He has of course a very real life back in the Ukraine. He tells me though, that when people ask him what he does, he tells them, "I am a 3100 mile runner." There seems to be little if any separation between any of his, and his family's feelings, about the part the race plays collectively in their lives. He says, "I am grateful that he chose me to play my role in his vision game. Here I get all of life's lessons condensed." 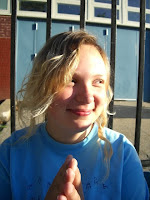 He starts to list things like time management, will power, calming the mind, and also how to appreciate others. As I hear that last thought of course, I cannot help but sense, that it means, that he is growing more and more appreciative of the s 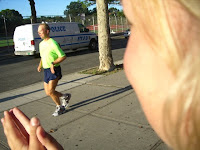 acrifice and efforts of his wife and daughter. Their tireless assistance, helps him run here day in and day out.

As he recites all the special events that have taken place here, between himself and his family, it quickly grows into an impressive list. Between spiritual names, and birthdays it shows, in a very real way, the intricate mix of his family's human lives and their spiritual lives, in and through the race. If he were to recall one moment, over the years here, that stands out above all others, he says, it happened just last year. He had just finished, and Sri Chinmoy arrived to celebrate it, and have the singers sing a new song composed to honor him and his family. He slowly got out of the car. When his Guru saw him, he just stopped, and applauded him. He even stops himself for a moment to show me, in that instant, he knew and felt, "I pleased you." 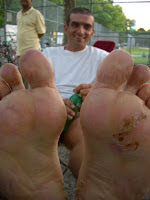 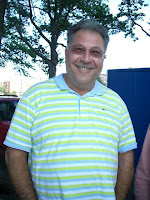 At the finish, both his fellow runners and supporters come out to celebrate his long journey's close. Pranjal shows his feet and his smile.

Jerry Shaber, who is a new and great fan of the race comes by. He has been enamored of the race for the last 3 weeks, and comes by every day after work and on Saturdays. He says, "It inspires me." 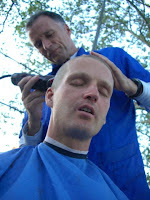 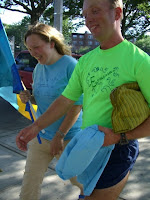 Stutisheel gets the finishing shirt and his country's flag. Alakananda is already celebrating.

Sundar gives Asprihanal a haircut, they will be celebrating soon. 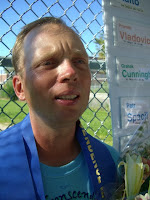 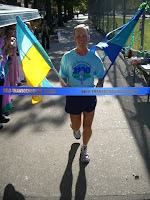 Soon enough he experiences, the elusive beauty, of fleeting time. He also has been gifted something, a little more rewarding and tangible. His running today, has been nothing short of stellar. He sets a new personal best of 50 days, 11 hours and 19 minutes. He has transcended himself by a mere and yet immortal, 1 hour and 2 minutes.


He is honored in song.


He and his family are honored in a song composed by Sri Chinmoy 2 years ago. 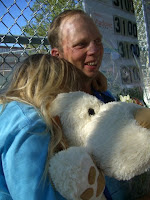 Alakanada will say of this race. "I am grateful for the opportunity to serve our Guru, through my Dad." 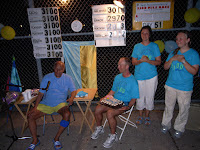 Excerpt from Seventy-Seven Thousand Service-Trees, Part 27 by Sri Chinmoy.
Posted by Utpal Marshall at 4:36 AM

All the time when Tanima's group sings the victory song for the finisher my six birds sing like anything. They are so fond of the victory songs, that I several times let them here it. Also I would to celebrate all the victories and congratulate them. How good that Ashprinahal, the race leader and breath no 1 of Guru's race is all time present.

Asprihanal of course and the second winner Pranab, I wanted to say so.