Keep it Simple, Keep it Real 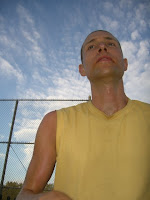 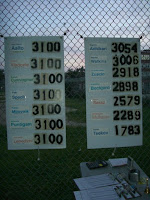 He has listened to all 7 of the Harry Potter books, and up till today, he has run 3056 miles. This is Daganta's third time running the 3100 mile race here in New York. When he finishes the last 44 miles, latter on today, he will complete the final chapter in his own long saga. One which began, 54 days ago. The story of this quiet, and content man from Austria is not one he cares to offer for public consumption however. Even though he has been under the rigorous and daily scrutiny of the bustling and busy world rushing by. His adventure has mostly taken place in the quiet and almost inaccessible private regions of his own heart. It is a place in which only his spiritual teacher, Sri Chinmoy, has the key. His lessons of transcendence, perseverance, and satisfaction were written bright and written clear. It is a story still in the making however, because the love of his Guru continues on, even after the miles have been completed. 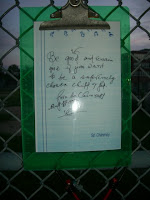 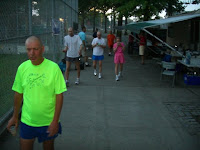 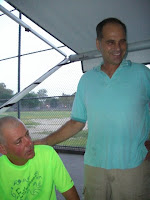 Abichal will be the next man to finish after Diganta. He has been running well and will likely break his own record tomorrow. Rupantar celebrates this, his penultimate day. 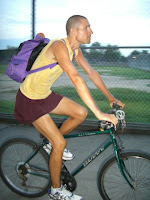 In what has been a fairly regular occurrence, Diganta shows up a 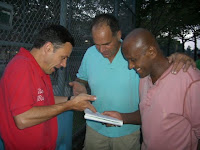 little late on this his final day.

An animated discussion takes place once again over the counter book. Where surprise surprise, no counters have signed up to count today. 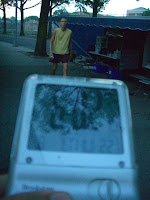 He does not rush, he does not worry, he is methodical and at peace. He knows what he has to do here, and how to do it, in order to experience his own peace, poise, and happiness, in the face of such an impossibly daunting task. 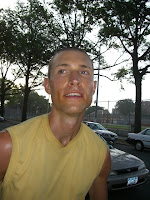 ells me, matter of fact, that he always plans at leaving the house at exactly 5:50. But, before he can leave he has to take vitamins, have a special drink, and select clothes. He tells me, "the minutes pass fast." Ultimately what held him up was the inspiration to check some shoes he had worn 2 years ago and check for fresh inserts. To his delight, he found some, which he could use for his final few miles.

It becomes clear, as we run along that he has learned and experienced much, over his 3 years here, participating in the 3100 mile race. He will not transcend his previous achievements here on the outer plane. But, it seems evidently clear, in his surprisingly calm and steadfast demeanor, that he has made giant strides inwardly in order to achieve this aura of contentment. He tells me, "I made a decision this year. I don't want to be happy just when it is over. Why not suffer the least that is possible. Why not be as happy as possible." He seems to have achieved this glowing state by following the simple and elegant plan of just listening to and going with his own capacity, within and without. 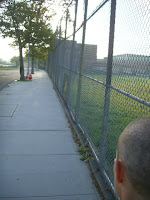 He tells me how he beat his first year's performance his second year, by something like 2 hours. Last year he could not compete because of a leg injury. And, despite the fact, that he will be about 3 days longer this time running, he is having, what he calls, "a great experience."

As he explains himself, his argument seems flawless. So many of the runners have expressed, the essence of the race, as being the journey, and not the destination. Here, as he describes it, "the purpose of the race is not to suffer, but to transcend ourselves powerfully." What he hopes to really accomplish here is to, "cover a great distance in the inner world."

He tells me what he calls his secret. It is, that he has, no blisters. Judging by the condition I have seen first hand, of most others, this sounds outright miraculous. 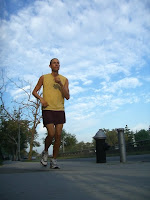 s for me the race as being something like the proverbial iceberg. One sees just this little bit bobbing about on the surface of the water, while beneath lurks so much more. He says, "In our deeper parts there is so much going on." He feels that one simple and effective achievement he has learned from the race is just to turn down the noise level of his own mind. What he feels is important is, "feeling more than thinking." This can only be experienced when one has a strong sense of inner peace and satisfaction.

He tells me that, "we usually don't feel enough at all levels. We are constantly looking for things to make us happy. I don't need anything to make me happy." He pauses for a moment after saying this, and adds, "I don't need anything from the outer world. Keep it simple, keep it real."

He describes the process, that exists in most peoples lives, in which thoughts come into their minds like constant drops. He says, "one is insignificant." The repe 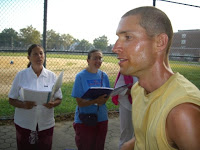 tition of this process however has an increasingly greater impact, than you realize."

He also compares completing the 3100 mile race to a careful and deliberate process. He says, "It is such a difficult goal to reach. Yet somehow you do it." He describes how each day he goes as far as he can go. Than the next day comes, and he just has to go on.

He feels that being out here on the course for so long and so many miles pushes him to get to know himself so much better. He tells me, "You are constantly confronted with yourself, all the time." He says in our day to day lives we are usually only dealing with outer things. The race for him, "takes your focus inside." As he continues to share these thoughts he is glowing with enthusiasm. He says, "I feel so much alive, it is like waking up in a dream." For him, he describes most life, as though we are 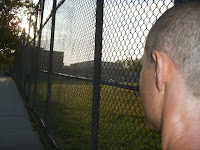 sleeping. Here is a place, in which he and the other runners, can really come into their own.

He is adamant, in that if there is anything he can carry out of the race, it is, that in the future, he uses his mind less and his heart more. He wants to, "connect to his inner being and not his outer mind." He adds before leaving me, "I don't want worries. I don't want doubt. I want conscious feeling, I want to be happy." 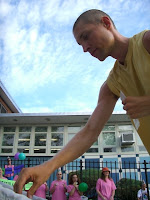 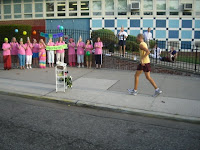 Each and every runner has a tremendous appreciation for the Enthusiasm Awakeners.

Just another day of inexhaustible joy in front of Thomas Edison High School. 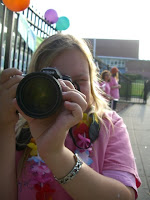 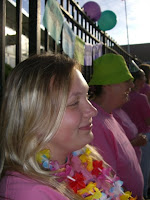 Today as well, is Alakanada's 17th birthday. There can be no better place for this young lady to celebrate, than with those who love her like a little sister. For four years, it has been her summer home, and might just be, where her heart lingers at other times as well. It is a place, steeped in deep and powerful experience for her. She will remember and savor her sweet and precious days here one thinks, long into the future. She admits that she was a little uncertain as she came here this morning, if her birthday would be a happy one. This is not surprising of course, because last year she had a birthday that most would say would be impossible to beat. Because Sri Chinmoy invited her to ride in his car. He drove her around the course that she loves so much. Here Alakananda got to ride with her Guru, and he got to show her in a very real way how much he loves her. 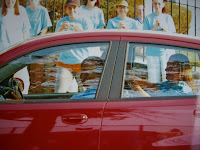 She will tell me how much she is grateful to Parvati, and all the girls who went out of their way and did so much to make the day just right. She will have photographs of all the things they did for her, and all the gifts that she received, because she just got a great new camera. But long into the future, I think this picture, the one she could not take, because she was in it, will be most precious, on August 7th. 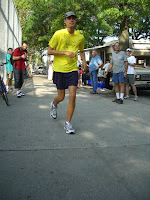 It is now late in the afternoon, and there are just a few laps to go. His day has been great, and he has run well. Overall he will average, 57.9 miles a day.


The victory song will be sung 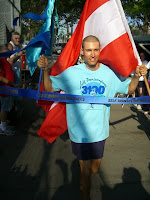 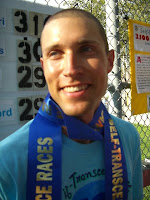 In this, his 3rd finish here, he will complete 3100 miles in 53 days, 11 hours, and 39 minutes. There isn't much more that I can say about this fine young Austrian runner. But occurs to me, that he should have the last word, since it was his indomitable efforts that allowed him to be victorious this day.

A Dedication to Sri Chinmoy

Posted by Utpal Marshall at 4:49 AM

I'm touched and inspired. It moves me deeply to hear about the inner journey and the commitment to feeling and being happy.

Diganta's face on the victory foto is as relaxed and good looking as he enjoyed weeks of holidays near a sea shore, in his own words: we usually don't feel enough at all levels, we are constantly looking for things to make us happy. I don't need anything to make me happy." He pauses for a moment after saying this, and adds, "I don't need anything from the outer world. Keep it simple, keep it real."