Many Races Going On 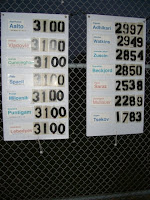 In a race, which was just a short while ago, all about thousands of miles, the 3100 mile race has now become something else. The longest distance anyone needs to run, is no more than 250 miles. The day starts with unsettled weather. Showers will come soon. The finish for all now, is just around the corner. 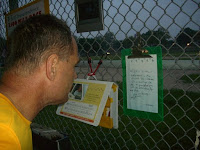 Rupantar checks out the days poem himself. 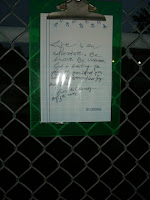 Life is an adventure Be brave. Be Victorious God is waiting for you to garland you with his boundless joy and pride 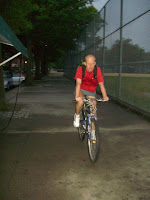 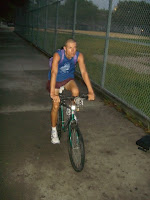 Ananda Lahari arrives. Yesterday he amazed just about everybody, but himself. He ran more than 64 miles, which he has not done since the first 3 days of the race.

Diganta did just about a similar amount, 62. Tomorrow he will be the next finisher. Today he has some rain, some sun, and 103 miles to go. 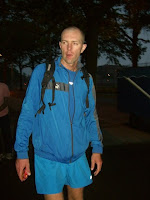 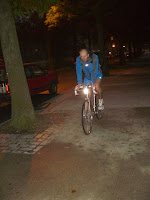 Pavol needs to get up just 3 mornings more. He will make his 2700 miles on Saturday. 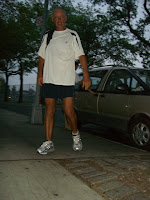 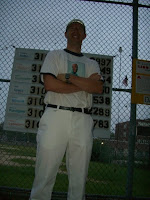 Abichal will need to get up just 2 mornings more. He finishes on Friday.
Jwalanta shows up, as a welcome visitor this morning. He tells me that he has never been here in person for the race. He is impressed by how the runners, light up and smile. "It is so inspiring watching,"he says. He will have several hours to observe this today. He has just been signed up by Rupantar to count. 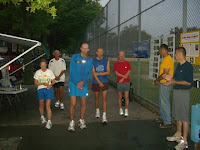 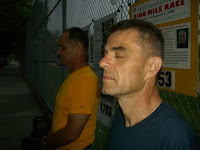 It is a dull and miserable morning. In a few minutes the sky will open up and it will rain. Here at the starting line, it is somehow all peace and light, as it is every morning when the runners pray before they start their day. 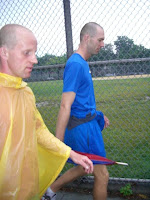 I have not asked Ananda Lahari the secret of his break out performance yesterday. As we walk together this morning the rain comes and goes but he and Pavol are oblivious to it all. Pavol is prepared for the rain with a heavy umbrella. Ananda Lahari wears his thin nylon poncho and tells me it is perfect. I am carrying an umbrella and have visions of my camera dying in the morning dampness.

He tells me that there are many races going on here. 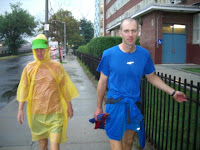 He recites a list familiar to all who have run here as well. He includes conquering tiredness, pain, injury, and poor consciousness. Most things, we on the outside looking in can just avoid or put off for another day.

He says something that does hit me as something quite profound. He says he feels that for him being here, "Is going to work 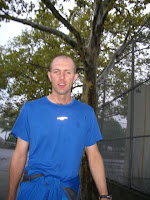 Pavol tells me with much satisfaction that he will finish on Saturday at 8pm. That is if he continues to average his 44 miles a day. He is enjoying it here, for him, when he is asked if he is having a good time, it is always an enthusiastic, "absolutely."

As for how difficult it has been for him, he says,"It was so hard from beginning. From first day to this day. Inwardly," he says, "It is so special." 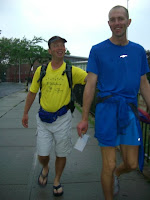 A familiar face shows up this morning for the Enthusiasm Awakener's prasad. His day will not be quite as strenuous as Pavol's but still may be challenging. He has to take his daughter Alakananda shopping for her birthday, which is tomorrow. 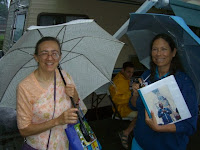 Radha and her group are about to go off and sing. Niriha is holding a Bengali song book of their 100 quick tempo songs. Radha says she and her group have been coming here for 4 years now, and describes the experience as "fantastic." She says, "we are getting energy too." She adds that as a bonus, "it is also helping my running."

If you want to see what the Enthusiasm Awakeners can do to a runner just observe the change in Abichal's expression. 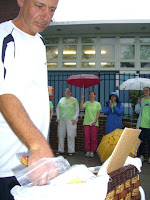 As I first run with Abichal he tells me of a very basic need he has, "I need some food." Breakfast will arrive shortly but right now he is not interested in pretzels and watermelon. One thing he apparently does not need is shoes, at least for now. Run and Become has come to his rescue as they have done many times before. He tells me how, "one year, I ran out a week before the end." He had no shoes he says, or money to buy them. He says of them, "they are SO important. If you don't have shoes you can't do anything." He reckons he has gone through 10 pairs of shoes over the course of the race. As for some of the top runners, he says, "Those guys shoes last 3 days."

We talk about some of the other runners who still share the course with him. The family still includes those 7 who have attained their victory but now it is down to just 5. He says of this group, "we are all the same, we are in the same boat. We are all here for Guru. We share the same reason being here. Only to please Guru, and do our best." 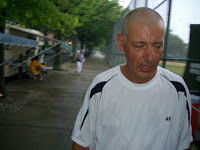 He describes that when your life is distilled down to its basic spiritual elements it makes for a very powerful life experience. When your life is about aspiration there is a purity in it. He says, "It is the trying, that is so important. It opens you, to the goal you are striving for." He says that he, and all his dwindling band forge on there is still a unique world here at the course. "By trying, there is protection."

Is the road for the ridiculous. 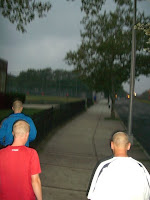 Is the road for the auspicious.

Is the road for the treacherous.

Is the road for the generous.

Excerpt from The Goal Is Won by Sri Chinmoy.
Posted by Utpal Marshall at 3:42 PM

You belong to the small group of people who know how to bow down to the Supreme. He shows you the way and he loves and needs you. To bow down to the Supreme is the most valuable gift. Say,
Supreme I bow to Thee, I bow.
Soon there will be a new series of
blog entries, free from the shackles of doubt, jealousy, insecurity, pride, disobedience, worries and anxieties, at last the Sunday with all its vital problems also. So the seven higher worlds and the seven lower worlds are all repeated every single week, until we learn to bow down to the King, the inner Pilot. Go on with at least one blog every week. You belong to the ones who know how to bow.
Question: How can I know God’s Will in my daily life?

Sri Chinmoy: You can know God’s Will in your daily life if early in the morning you offer your utmost gratitude to God for what He has already done for you. When you offer your gratitude-heart, then it expands; and when it expands it becomes one with God’s Universal Reality. Gratitude-heart blossoms like a flower. When the flower is fully blossomed, then you appreciate and admire it. In your case also, when your heart of gratitude blossoms, immediately God is pleased. So if you offer gratitude to God for what He has already done for you, then naturally God’s sweet Will will operate in and through you. Early in the morning, before you meditate or do anything, offer as much gratitude as possible; offer your soulful tears just because you have become what you are now. If you do this, eventually you will become infinitely more than what you are now. So gratitude will be able to make you feel what God’s Will is. God’s Will will act in and through you and God will do everything in and through you, and for you, if you offer gratitude.

I love this text, it is so important that we offer gratitude to the Supreme and from there increase it every day.